U.S. Environmental Protection Agency officials announced last week three steps they say will better protect communities from pollutants that are often called “forever chemicals” because they don’t break down easily in the environment or in our bodies.

The federal agency detailed plans to improve methods to detect per- and polyfluoroalkyl substances, or PFAS, in water, reduce PFAS discharges into the country’s waterways, and protect fish and aquatic ecosystems from PFAS.

PFAS are a large group of man-made chemicals resistant to heat, oils, stains, grease and water that have been used in consumer products and industrial processes since the 1940s. Research shows that exposure to some PFAS may be linked to harmful health effects in humans and animals.

Many in the state have been keeping close tabs on action being taken to stop PFAS pollution since news broke five years ago that the chemicals were detected in the Cape Fear River, a source of drinking water for many in the Wilmington area.

The Wilmington StarNews first reported in June 2017 that a North Carolina State University-led study had detected a compound called GenX and other PFAS in the Cape Fear River. Chemours’ Fayetteville Works facility was found to be the source of the chemicals in the waterway.

The Southern Environmental Law Center, on behalf of Cape Fear River Watch, litigated a 2019 consent order requiring Chemours to stop at least 99% of PFAS pollution. During all this, EPA Administrator Michael Regan was secretary of the North Carolina Department of Environmental Quality.

Regan put out a statement Thursday on the latest actions, which follow the administration’s plan announced last fall to combat PFAS pollution and complement the $10 billion in spending to address PFAS and emerging contaminants in the $1 trillion infrastructure legislation passed last year.

“EPA is using all available tools to address PFAS contamination as part of a broader, whole of government effort to protect communities across the country from these chemicals,” Regan said. “This is why we put a Strategic Roadmap in place, and why President Biden fought for billions in funding under the Bipartisan Infrastructure Law to tackle this challenge. Today’s actions help protect the health of all Americans as we deliver on our commitment to research, restrict, and remediate PFAS.”

PFAS and non-PFAS fluorinated compounds such as pesticides and pharmaceuticals are a common source of organofluorines, or molecules with a carbon-fluorine bond, found in wastewater, according to the EPA.

EPA’s Draft Method 1621 announced Thursday detects organofluorines, which do not often occur naturally. When used in conjunction with methods that target individual PFAS, the new method can broadly screen for the presence of PFAS at the parts-per-billion level in wastewater. It’s still in testing and officials intend to publish an updated version later this year.

Dana Sargent, executive director with Cape Fear River Watch, responded to Coastal Review in an email Friday, saying that the new method would add to, but should not replace, the current method, mass spectrometry using targeted analysis. She said current the method alone only provides insight on a tiny subset of the PFAS known to be out there.

“The nontargeted analysis the consent order required Chemours conduct showed 257 ‘unknown’ PFAS being discharged from this one facility, yet regular sampling by the state, utilities and others only provides concentrations for about 20-30 PFAS,” she said. “Neither the public nor our decision makers are getting an accurate view of the extent of the issue when relying solely on testing for specific PFAS. This new method will not provide specifics on which types of PFAS or how much of each is in a given sample, but will give us that big picture view to inform more detailed sampling.”

EPA officials propose to use existing NPDES authorities to reduce discharges at the source and obtain more comprehensive information through monitoring on sources of PFAS.

The agency on Thursday issued the memo, Addressing PFAS Discharges in EPA-Issued NPDES Permits and Expectations Where EPA is the Pretreatment Control Authority, which provides instructions for monitoring provisions, analytical methods, the use of pollution prevention, and best management practices to address discharges of PFAS.

Sargent noted that the instructions for federally issued NPDES permits would not apply to permits issued by states, “So we look forward to even stronger recommendations from EPA to the states.”

Following the comment period, the EPA intends to issue final PFOA and PFOS recommended criteria. States and Tribes may consider adopting the final criteria into their water quality standards or can adopt other scientifically defensible criteria that are based on local or site-specific conditions.

In the Cape Fear area, advocates say many depend on subsistence fishing. They say standards for aquatic life are important for those who consume it.

Veronica Carter is a member of DEQ’s 16-member Environmental Justice and Equity Advisory Board, Leland town council member and longtime board member with the North Carolina Coastal Federation, which publishes Coastal Review. She is among those who have called for safeguards for people who consume fish they catch in the river. She said the potential exposure to contaminants is an environmental justice issue.

It’s a source of protein for those who can’t afford to buy food, Carter says in a video made last summer for the Stop, Check, and Enjoy! campaign, a collaborative effort that encourages eating and preparing fish in ways to limit exposure to chemical contaminants found in those caught in the Cape Fear River.

“It’s an environmental justice issue because it is not their fault that the river is impaired. We have polluted the environment, our Cape Fear River,” Carter says in the video.

Carter said it’s great that there’s a new way to detect PFAS levels, but “what are we doing about getting rid of PFAS?”

“I don’t want to reduce, I want to eliminate,” she said.

Sargent said in an interview that there needs to be requirements and reminders by the EPA that state regulators adhere to the Clean Water Act and include technology-based effluent limits within their permits, rather than rely on best management practices after the fact.

States should not be permitted to wait for a permit to expire, but should have the authority to revise current permits to stop the ongoing contamination by PFAS polluters across this country now, she said.

“Polluters have been given carte blanche to dump their toxic chemicals into our environment and our bodies for decades; it is well past time for our regulators to protect people and the environment instead of the corporate polluters,” she added.

The Southern Environmental Law Center’s Geoff Gisler, senior attorney who represented Cape Fear River Watch against Chemours in North Carolina, said in a statement Thursday that the EPA’s action is the beginning of a significant step forward in protecting communities from PFAS.

The groups’ lawsuit resulted in a consent order with DEQ, Riverwatch and Chemours to stop the GenX and other PFAS pollution at its source.

“The agency recognizes that existing law requires all sources to disclose their pollution and that EPA has the responsibility to reduce or eliminate those discharges through the permitting process,” he said. “Now, the agency must put monitoring requirements and pollution controls into action. We encourage EPA to use its full authority under the Clean Water Act to eliminate PFAS contamination by modifying its permits as fast as possible.”

“At least the EPA is talking about PFAS, and I give Regan credit for that. One of the things I said to him when he left DEQ was not to forget us, and he hasn’t,” Carter said. “It is going to take state law and permit changes to protect us better from pollution.”

She said action needs to come from the federal government as well. 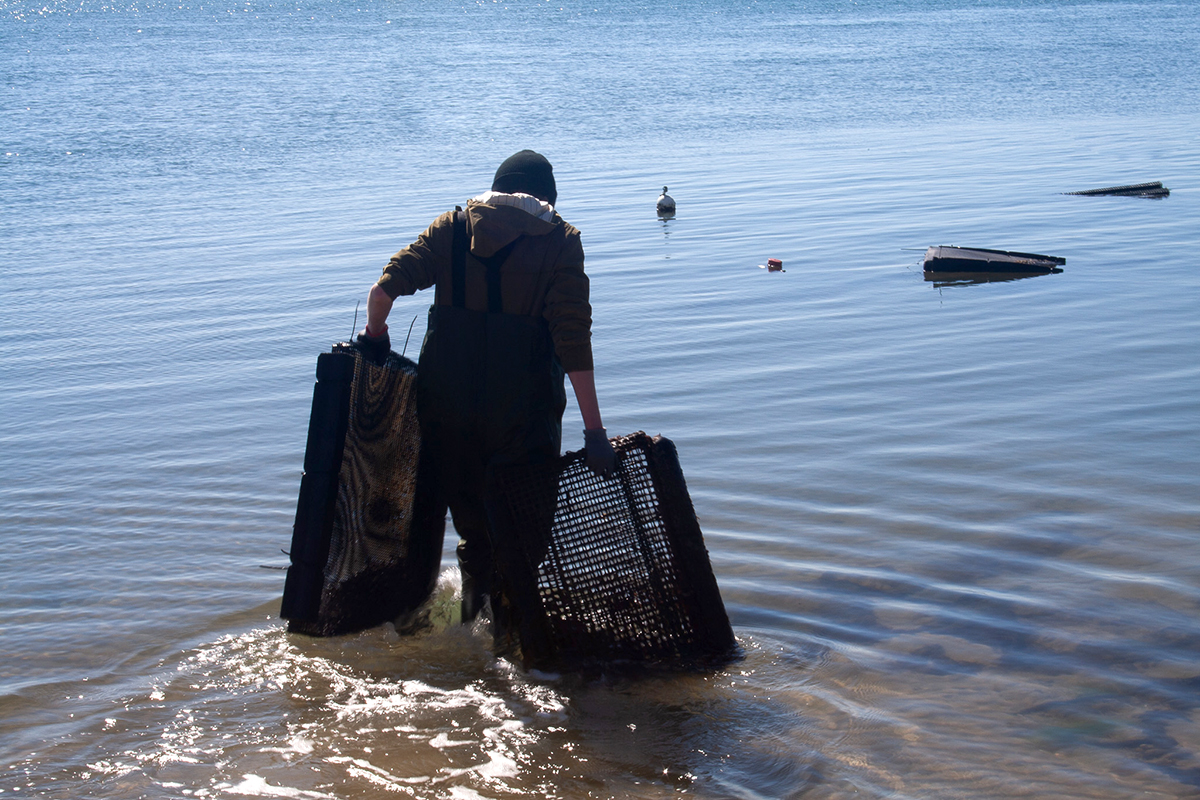 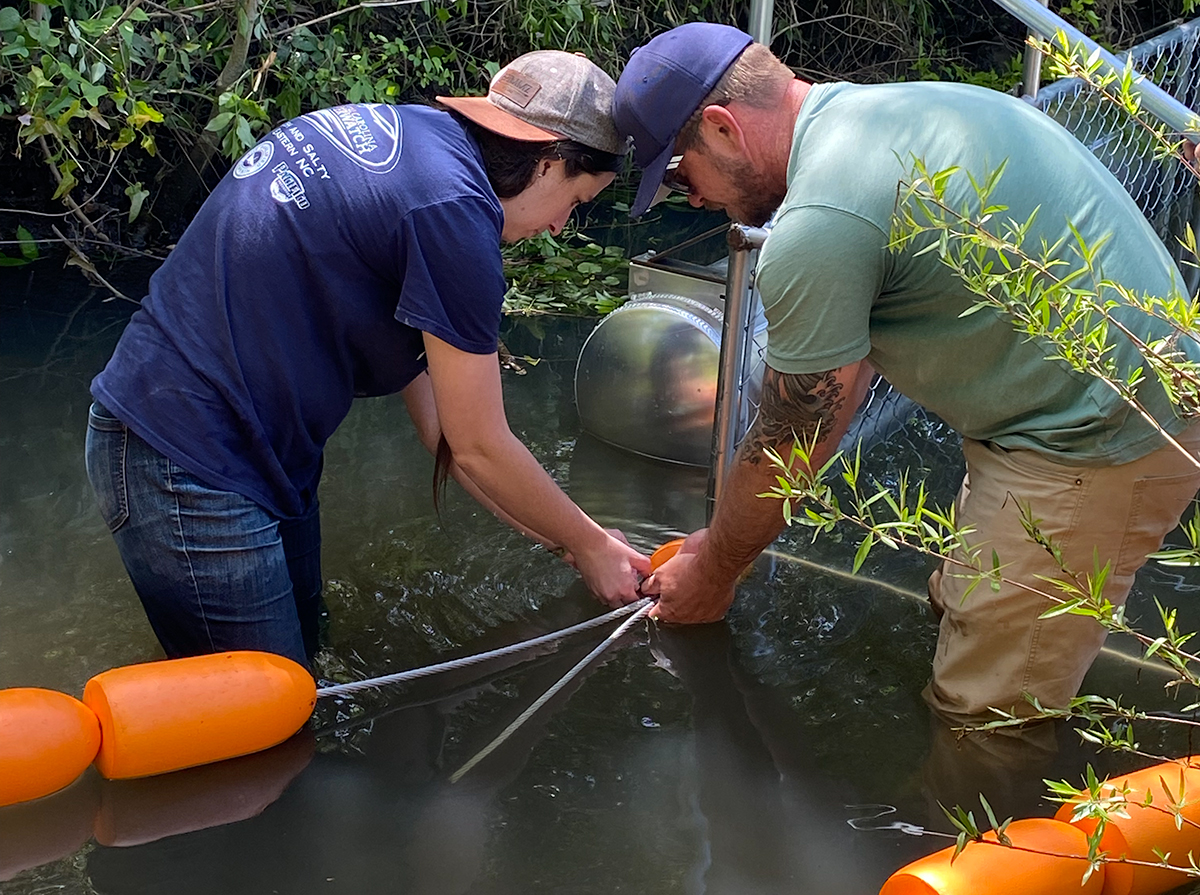 Groups are setting traps to reduce plastics in NC waters

Jockey’s Ridge joining real-time weather data network
Support the coastal news you value.CoastalReview.org is an award-winning, nonprofit news service providing unbiased, in-depth and investigative reporting about issues on the North Carolina coast. Your support makes our work possible. Please join the CRO Press Club or put your business in the Sponsor Spotlight to support the coverage your care about. Learn MoreGive or Sponsor