BOGUE BANKS – While coastal tourism can boost the local economy, it also can boost nutrients in the groundwater, results of a recent study suggest.

Because many coastal communities treat and dispose of wastewater onsite, the question researchers sought to answer was whether the seasonal increase in population would affect water quality, leading to the pilot study funded by East Carolina University.

Along with O’Driscoll, Eban Bean, an assistant professor and extension specialist of urban water resources engineering at the University of Florida, Nick Mahoney, environmental health specialist for Union County, and Charlie Humphrey with ECU’s Environmental Health Sciences developed the study.

Mahoney focused on the effectiveness of package treatment plants for his graduate research at ECU in geological sciences. He completed his master’s thesis on the topic in 2016.

“The group recognized that there was a growing reliance on package treatment plants along North Carolina’s coast, but there was limited published information,” O’Driscoll said. “This project was developed to help fill in some knowledge gaps to help understand what types of systems were most common, how effective those systems were at treating nutrients, and how they are affected by large seasonal changes in wastewater inputs due to coastal tourism.”

The team tested once a month from February 2014 to January 2015 the nitrogen removal effectiveness of PTPs that use different technologies – extended aeration, sequencing batch reactor and advanced media filtration — to treat wastewater at seven different vacation properties. The state Department of Health and Human Services gave direction and supporting data while volunteers on Bogue Banks provided site access and data that allowed the group to monitor the seven package plants for a year. Carteret County provided additional supporting data and help.

Nutrients like nitrogen and phosphorus are vital for plants and animals, but an excess of certain nutrients in water can result in a number of adverse health and ecological effects, according to the United States Geological Survey.

O’Driscoll presented the results of the study during the North Carolina Water Resources Research Institute’s annual conference March 21-22 in Raleigh. He said he expects to have the final version of the study, which is still under review, later in the summer.

According to his presentation, Bogue Banks had a year-round population of 7,413 in 2015, with the largest year-round community being Emerald Isle at 3,726. Those numbers grow dramatically during vacation season.

Along with the large population spike during summer comes increased water use and wastewater generation.

“Wastewater is typically enriched with nutrients, so effective wastewater treatment is essential to control nutrient loading in these sensitive areas,” O’Driscoll said in an interview, which is where PTPs come in.

PTPs are increasingly being used in coastal communities because they can manage larger wastewater loads during summer months, when there is an influx of visitors.

“Treatment can vary at different systems and also throughout the year based on how much wastewater is delivered to the system, how warm it is and what the wastewater is composed of. Since most of the treated wastewater goes underground, it is important to understand if the wastewater is treated properly and if the groundwater quality is impacted,” he said.

Because wastewater treatment is not centralized in coastal communities, there can be a large number of individual systems.

“Although each system may have a small nutrient contribution compared to a large municipal wastewater treatment system, in areas where there are high densities of onsite systems there is evidence that the groundwater and surface water quality can be impaired by excess nutrients,” he said.

“If groundwater contamination occurs, those contaminants can be transported by the groundwater system to nearby surface waters such as the ocean, estuaries, ponds and canals,” he said. Nitrate is one form of nitrogen commonly exported from these systems and is mobile in sandy soils. “So it can be transported to surface waters, unless it gets treated in the subsurface or taken up by vegetation or microorganisms.” 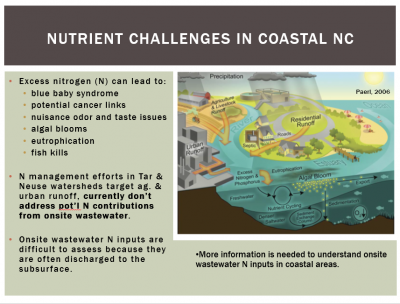 If the elevated nitrogen concentrations affect nearby surface waters, impairments such as harmful algal blooms and reduced water clarity are possible and may affect where visitors can swim, recreate or fish. O’Driscoll added that algal blooms can be enhanced during warm, sunny periods if nutrients are present.

He added that PTPs are usually managed by experienced operators and the state and counties have regulatory oversight, which is “critical to ensure that human and environmental health risks associated with contact and ingestion of wastewater contaminants such as bacteria, viruses, and nutrients, are minimized,” he said.

O’Driscoll said that the state is “making substantial efforts to deal with excess nutrients in surface waters, however the past focus has often been on agricultural and urban runoff, and municipal and industrial wastewater treatment plants” but because onsite wastewater systems tend to be spread out across the landscape and inject wastewater below ground, management has not focused on nutrient reduction for these systems.

Coastal areas may need improved technologies and greater oversight because of the sandy soils that can infiltrate water quickly and the common presence of shallow groundwater, which Is usually less than 10 feet from the surface.

Sea level rise is another factor to consider in North Carolina.

“It is likely that the groundwater table will rise in coastal areas in the future. These changes may affect the treatment efficiency of onsite wastewater treatment systems because rising groundwater levels can cause a reduction in the thickness of unsaturated soils that help to treat the waste,” he said.

Also, more research is needed to understand which onsite wastewater systems will be most effective to handle shallow water tables and coastal storms in the future to ensure that groundwater quality and the adjacent surface water quality are not compromised.

O’Driscoll said that people can lessen their impact by conserving water to reduce nutrient loading, because wastewater nutrient loading is related to the amount of water used.