A new report on sea level rise says as many as 20 North Carolina communities could be regularly inundated with sea water within 15 years, but local experts believe the number affected could be greater and that some areas are already suffering the effects of a rising sea.

The report, When Rising Seas Hit Home: Hard Choices Ahead for Hundreds of U.S. Coastal Communities, looks at when coastal towns and cities across the country can expect to see a level of flooding that is disruptive to daily life – affecting homes, routines and livelihoods. 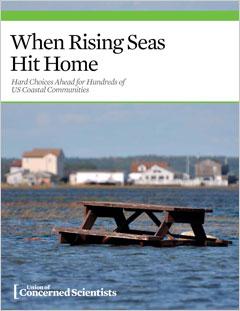 The report uses three projected scenarios of flooding – low, intermediate and high – based on estimated carbon emission through the end of the century. The low scenario assumes global warming is limited to less than 2 degrees Celsius in accordance with the Paris Climate Agreement, while the high scenario assumes carbon emissions will rise through the end of the century.

According to the report, 13 coastal North Carolina communities will face “chronic inundation,” flooding that covers more than 10 percent of usable land at least 26 times a year, by 2035 in an intermediate scenario.

With the high scenario of sea level rise, the number of communities being chronically inundated jumps to 20 by 2030 and 40 by 2060.

Mike Giles, a coastal advocate with the North Carolina Coastal Federation, said he was not surprised by the report’s findings.

“If anything I think they are fairly conservative,” he said. “If you look at just a normal high tide in the Wilmington area, you can go down to areas bordering the tidal creeks and you can find sewer manhole covers that are under water. And I’m not talking about a flood event. I’m talking about a normal high tide – that’s a warning that we’ve got to start planning better.”

Larry Cahoon, a biology and marine biology professor at the University of North Carolina Wilmington, agreed and said the effects on infrastructure will be felt far in advance of regularly occurring flooding.

“I think if anything, the report is kind of conservative. It talks about inundation, which is actual standing water in the streets. The least mistakable effect of sea level rise is that you’re under water,” Cahoon said.

“Long before we have sea water standing in the streets, we’re going to have other problems, and those problems are going to cost us more money and cause us more trouble steadily.”

One of those problems will be waste management, he said.

“The infrastructure that is first exposed to seawater effects is the waste treatment systems that we use,” Cahoon said. “Long before your roads become flooded, your sewer pipes are going to be under water. And if they’re leaky, they’re going be full of sea water – and that’s bad – and your septic tanks progressively go under water and they’ll fail.”

In some places, this sort of thing is already happening, he said. Communities such as Sunset Beach and Oak Island in recent years have switched from septic systems to central sewage systems. But with a price tag of about $1 million per mile of sewer line to install, he said central sewer isn’t exactly a cheap fix, and the system is still quite vulnerable to increasing tides.

“The problem with central sewer, aside from it being very expensive, is that now you’ve got infrastructure in the ground,” Cahoon said. “If you don’t build the central sewer system properly, the collection system – if it leaks excessively to begin with or breaks down over time … the sea water, as it comes up and engulfs those pipes, will enter those pipes and then you’re actually treating sea water in your sewage system.”

And the wastewater treatment plant above ground is likely vulnerable to flooding from storms, as well, he said.

“Kinston lost its sewage system to Hurricane Floyd back in 1999,” Cahoon said. “That becomes a really expensive proposition, when you’ve got to rebuild a sewage system. Once you’ve gone down that road, you’ve invested many, many millions of dollars, so you almost have no choice but to keep doing it.”

Cahoon said he believes the solution to the wastewater management problem is a technologically advanced on-site management system.

“I’m not a waste system engineer, but there are technologies out there that, if they were developed properly, could provide for on-site waste treatment – that is residential-scale treatment that does not require a central system and collection system,” he said.

It would be a big change, he said, but “my view is if you want to live on the coast you’re going to have to deal with waste treatment somehow. Central sewer is vulnerable to flooding  … septic systems are primitive technology … we can do better than that.”

Other changes sparked by rising seas and increased flooding can already be seen in some areas across the North Carolina coast. For more than 10 years the Hazard Mitigation Assistance program has been awarding grants funded by FEMA to either elevate homes above flood levels or buy out and remove homes to make them public open space, with the goal of reducing or eliminating the risk of repetitive flooding.

Nick Burk, who oversees the Hazard Mitigation Assistance program for North Carolina Emergency Management, said the program has bought out about 8,000 and elevated around 700 homes across coastal North Carolina since its inception in 1996.

“You see us doing this type of work after a disaster, but … for the past decade North Carolina Emergency Management has been very effective in helping local governments get nationally competitive funding, too. So you don’t necessarily need a disaster,” he said. “And a lot of coastal communities have been very proficient in raising houses whether there’s a disaster or not.”

Burk said there are no income restrictions for the program and explained that the requirements are based on a sort of flood analysis showing that for every dollar spent on a subject property, enough potential future damages will be avoided that the federal government can recoup the investment.

“Say there’s flood insurance on a house and every five or 10 years you’re making a flood claim of $20,000 a year – that’s going to drain the National Flood Insurance Program,” he said. “So if (we) buy that house out or raise it so flood waters pass safely under the elevated foundation, there’s not going to be as many flood insurance claims.”

Burk estimated that roughly $870 million has been spent on buying out or elevating homes through the program. But the dollar figure spent would likely be much higher without the hazard mitigation program, he said.

“There have been academic studies that show for every dollar you spend, typically you’re going to recoup about $4 in potential future damages avoided,” Burk said. “So if we were to take that $870 million and multiply it by $4, you’re looking at almost $3.5 billion dollars in potential damages avoided.”

While local cities and communities may be working to adapt to higher water levels, the report cites reducing global temperature and carbon emissions as outlined in the Paris Climate Agreement as the best way to slow the acceleration of sea level rise.

Giles with the federation agreed, adding that more could be done in North Carolina, as well as nationally.

“I think Gov. Cooper should reinstate and appoint a new climate change commission and advisory science panel and it be one of his priorities and strategic things, and something that’s set in stone that another governor, or whatever, cannot disband it,” he said. “The need to start planning and working with all of the local governments and local organizations and federal government agencies and start developing a long-range strategic plan on how we’re going to have to adapt to this oncoming, excuse the pun, tide.”

Giles noted the Coastal Stormwater Rules passed in 2008 that lawmakers have attempted to weaken in recent years.

“North Carolina used to be the model government of every other coastal state. They would come, they would look at our rules and try to emulate what North Carolina had done,” Giles said. “And now what we’re doing is regulatory rollback and the people that make the rules, all the legislators in Raleigh, they’re just listening to short-term opinions of people that want to make a short-term profit, and they don’t care about what’s going to happen in 20, 30, 50 years. And they need to start caring.

“When you talk to the politicians, they don’t want to talk about (climate change),” he said. “They’re sticking their head in the sand, so to speak, but pretty soon their head is going to be underwater.”

Lori Wynn is a freelance writer and editor who grew up on Ocracoke Island. After obtaining a bachelor’s degree in journalism in Memphis, Tennessee, Lori returned to Eastern North Carolina, where she was a reporter for the Carteret County News-Times, covering Beaufort and county government, the North Carolina General Assembly and more. Lori later worked as the editor of the Bryan County News, a community newspaper in coastal Georgia, for four years. She now lives in Savannah, Georgia, with her husband and two daughters.