The incessant wind that batters the sand dunes of Bear Island constantly buries the present and unearths the past, as the skeleton of this long dead tree attests.

BEAR ISLAND — The shorter days of winter along with the security and safety of my daily routine had insulated me from the amazing natural world that surrounds us. I needed to feel the raw cold wind of nature against my skin and head out to kick around on one of our remote barrier islands to get back into balance with nature.

Even though I was savoring the mild winter weather, I was looking forward to the first blast of cold arctic air to hike my favorite undeveloped barrier island. So I went home, home to Bear Island. Not home where I had a house and lived, but home to my heart, my soul and my spirit. I first went to Bear Island at Hammocks Beach State Park in Swansboro as a young teenager on a hot and windy late summer day. The park ferry meandered through the marsh grass and deposited me on this big, powder sugar island that immediately filled me with joy, excitement, wonder and questions. That trip reminds me of a passage from an old John Denver song, “coming home to a place he’d never been before.” This is a place that nourishes me and can dissolve any worry. It is a refuge of peace and serenity.

On this day, Bear Island was all mine. The northwest wind was at 15 miles an hour and a temperature of 40 degrees provided just the wind chill to ensure solitude.

When I reached the island, the sun was all alone in a big blue sky except for a few jealous clouds peeking over the horizon. It was close to midmorning and the sun was casting long, exaggerated shadows. During the winter, the sun doesn’t creep too high into the sky, only about 32 degrees off the horizon compared to 78 degrees in the summer. This low angle bathes everything in nice, soft light.

Since it was low tide, I immediately headed to the beach and started walking east. I was surprised to see that the big primary dune line was slashed in half as if cut with a knife and I didn’t realize that storm surge from Hurricane Sandy had pulled this much sand back into the ocean. But this is how it is on the barrier islands; storms and wind are constantly reshaping this dynamic, mobile ecosystem.

The wide, flat beach stretched out before me, and I walked along the water’s edge as loons and cormorants trawled for fish close to the shore. The cormorant disappeared below the surface and reappeared with a fish that was quickly sliding down its throat. As the waves lifted, the stiff north wind blew off the crest creating a misty spray that rained down like a shower. Out to sea, the gannets were soaring about looking for schooling surface fish. These birds have forsaken land, except for the nesting season, and will spend their lives out on the open sea, a true mariner.

Up ahead on the beach near the dune line, I thought I saw a stump of drift wood move. I walked towards the driftwood and a merlin took to flight with a dead bird clinched tightly in its talons. It traveled only a short distance before settling down again on a small piece of driftwood that was a poor substitute for a proper perch. It then flew about in a frustrated search for the security of a high perch until it headed off to the back side of the island seeking the refuge of the maritime forest to finish eating its prey. 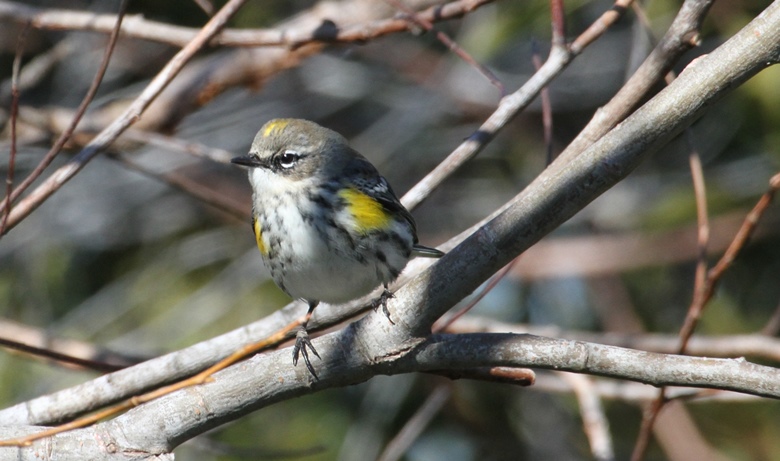 Large groups of yellow-rumped warblers flit through the shrub thickets, filling the air with the sharp chirps that keep the groups together.

I wandered back down to the water and found that the receding tide had littered the beach with bleached keyhole urchins, also known as sand dollars. They were everywhere, but what really caught my eye was a handsome eastern murex shell that was being tumbled about by the last surge of incoming waves. It had been rolling around for quite a while as its spines were rendered short and smooth, but still a good find. I picked up the shell and looked out to sea just as a group of four brown pelicans silently glided above the breakers surfing the updraft created by the curling wave. I listened as the wind and waves sung a song that I know well.

With my craving for the beach and ocean whetted, I now crossed over the primary dune line to hike through the interior dune fields. The topography of the island is not as flat as you would think. There are big dunes here with large valleys and pockets of shrub thickets and open grasslands. The grassy areas contain little blue stem grass that was busting open with fuzzy seed heads creating the illusion that the landscape was out of focus.

Within the blades of this grass, tiny caterpillars have folded over the blade into a tent where they are camping out for the winter. In the spring they will awaken, feed on the grass and metamorphose into a species of butterfly known as a skipper.
Among the blue stem, bare sea oat stalks poked up out of the sand, their seed heads stripped away and sewed into the sand by the winds that shape the island.

The pockets of shrub thickets contained way myrtle, bay trees and yaupon laden heavy with red berries so bright that even a color blind person such as myself could spot them from a distance. Among these bushes, a confusion of tiny yellow-rumped warblers darted in and out of the branches to take a peek at me. Their sharp chipping sound filled the air and enables the birds to keep in contact and stay together as a group.

The insistent winds out here are constantly burying the present and revealing the past. As I walked along, I saw exposed burnt tree stumps, evidence of a fire in the 1940’s that wiped out a large maritime forest in the central part of the island. I also came across a couple of Native American midden piles that made it quite evident that the native people, most likely Neusiok and Coree tribes, feasted here on clams, scallops and oysters.

I continued out onto the open dune flats where a number of clam and scallop shells were scattered about. This is evidence of what my old friend Ranger Jesse Hines referred to as “nature’s microwave.” The gulls will pull the mollusks out of the marsh, fly over to the dune field and drop the shell onto the sun baked sand. Then it’s just a matter of time before the shell pops open providing a meal for the hungry birds.

As I walk along, I stop dead in my tracks; depressions in the sand indicate that lions are about. Well, not real lions, but the larval form of an insect called an antlion which is also known as a doodlebug. This bug will build a conical shaped two-inch depression in the sand to trap ants. When an ant stumbles into the depression, the loose sand on the sloping sides make it difficult to get out. The antlion will then flick out sand from a concealed position at the bottom of the pit. This causes the sloping walls to collapse and bury the ant. The antlion can then easily capture the ant with a nasty set of choppers.

Nearby, something else steals my attention, a small two-inch gray object partially buried in the sand. I immediately recognize that this is a fulgurite, or what is also called petrified lightning. These hollow glass-like tubes are formed when a bolt of lightning strikes the sand and fuses the quartz particles at 3,270 degrees Fahrenheit. I feel lucky since these prizes are hard to find.

I begin to meander towards the dock to catch my boat ride back to the mainland. Overhead one mature and two immature bald eagles fly in lazy circles before drifting low over the marsh.

The undulating dunes are obviously marching along, tiny sand grains are being blown along and piling up until they spill over the angle of repose and cover anything in their path. These bare dune fields, not the mammal, are how the island got its name. Early records indicate that the island was originally named Bare Banks. Over time the spelling evolved into Bear Island. Black bear do, however, visit the island; about every four years a young bear seeking out territory will wind up on Bear Island. They soon move on after a few weeks when they realize that the food and water that a bear needs are bare. The name Bare Island may also be the reason that the island was long rumored to be a clothing optional beach.

I finished off the day by hiking to the highest dune field on the island which is close to 60 feet high. From here the view is incredible. The landscape stretches out like a patchwork quilt of shrub thickets, grass lands, white sand dunes, maritime forest, ocean and sound.

The breeze blew in spirits of the past. Native Americans, pirates, Colonial politicians, ship captains, soldiers, a hunting guide and a brain surgeon all called this place home, just like I do. I’m sure that this beauty did not escape them either. My friend Ranger Hines frequently told me stories about buried treasure on this island, after today, I realize that most of these treasures are not very well hidden.