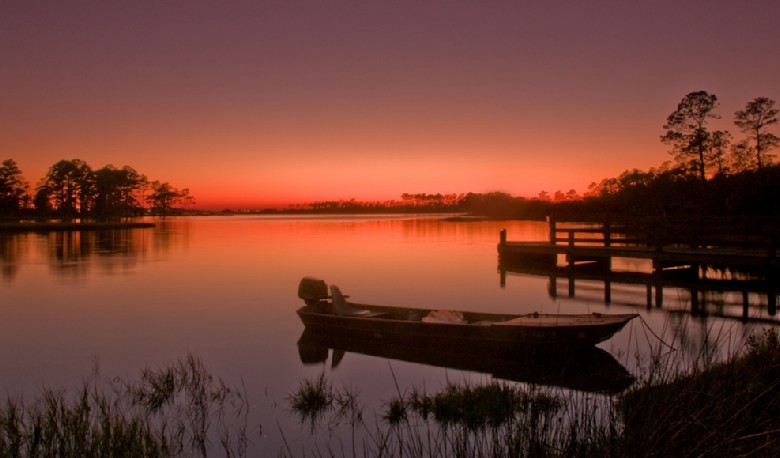 Jim Snyders of Ohio won first prize in the federation photo contest with this serene scene of a glorious fall sunset over Boathouse Creek in Carteret County.

OCEAN — Jim Snyders chose a glorious October day to visit one of our special places, the Cedar Point Natural Area in the Croatan National Forest in Carteret County. He walked by the little public boat ramp in Boathouse Creek and an artistic inkling struck him and stuck.

“Earlier in the day I noticed this area when walking the beautiful and tranquil trails,” he wrote us. “Later in the day when seeing the potential for a beautiful sunset and no wind I drove back to capture this serene image long after sunset.”

Snyders’ photo of a glorious fall sunset along the N.C. coast won the $500 first prize in the N.C. Coastal Federation’s 2012 Photo Contest. Snyders lives in Ohio but has a house in Emerald Isle.

Debby Gleeson of Jacksonville took second place and $250 for her serene photo of a foggy field near Richlands in Onslow County, and Miriam Sutton of Beaufort captured third place and $100 for the mystic fisherman of Ward’s Creek in eastern Carteret County.

Four other photographers were awarded honorable mentions. They will receive federation memberships.

The winners and all the other 46 entries are in our Photo Gallery. Go take a look. We think you’ll agree that they are a diverse bunch of photos. We had asked people to send us photos of their favorite places along the N.C. coast. Yes, we received plenty of beach scenes, but people also took pictures of cotton fields and pastures, swamps, ducks waddling along a lawn and even a green car in crowded street.

The diversity of the scenery and the technical excellence of many of the photos struck Scott Taylor, a professional photographer who has a studio in Beaufort and was among the three judges of the contest.

“The quality of the entries in this year’s competition was outstanding which made judging both enjoyable and challenging,” he said. “There were so many great images to choose from. The winning photographers used their creative vision to rise above the crowd and show that cameras don’t make the picture, people do. In today’s Instagram, over-saturated world they have shown that there is more to creating a quality image than having an ‘App for that.’”

Once again, we thank Emerald Isle Realty, which provided the prize money.

Todd Miller, the federation’s executive director, hopes the beautiful photos inspire people. “There are so many beautiful places along our coast – many are hidden treasures,” he said. “We hope that by seeing some of these special places, people will want to visit and learn more about them, and become more engaged stewards of our state’s coastal areas.”

Miriam Sutton of Beaufort took third place with this photo of a fisherman in Down East Careret County. “‘Fishing the Fog’ was captured on a foggy fall morning along Ward’s Creek,” she writes. “This fisherman had the silence and beauty of this morning to himself. A Carteret County Down East commute is undoubtedly one of the true treasures in N.C.”