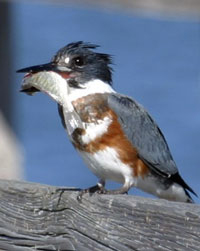 Flushed now to an exposed perch, I could only see the silhouette of its uniquely shaped body through the gathering darkness. Its large crested head included a long, stout pointed bill and a stubby body with very short legs. This distinctive shape and coloration is not easily forgotten. Sporting a slate blue head, wings and back, the kingfisher has a white chest and belly with a blue neck band. The female is a bit showier and flaunts an additional reddish chest band. A legend contends that the band was scorched across the breast of the first female kingfisher when she flew too close to the sun.

The belted kingfisher (Ceryle alcyon) primarily eats fish, but has also been known to eat crabs, insects and even lizards. It uses two methods to find prey –patrolling or perching. The kingfisher will patrol a stretch of clear water, scanning for surface fish. It will hover, acquire the target and dive head first into the water. The bird then spreads its wings to keep from going too deep into the water. From a stationary perch near water, such as a dock railing or piling, a kingfisher will sit as motionless as stone then launch itself headlong after the prey.

Once a fish is firmly pinched in its powerful bill, the bird will return to a favorite perch to consume the meal. But first, to prevent the slick mucus covered fish from squirting out of its grasp, the
kingfisher will pound the liveliness out of the fish on a hard object. It will then position the fish head first and gulp it down. I was once on a boat tour conducting a birding program when a kingfisher began patrolling a section of marsh water near the boat. I had just finished presenting the group with detailed information about their hunting technique when the kingfisher slowed to a hover right next to the boat. It then plunged into the water with a splash, then promptly flew onto
the boat rail, pounded the fish a few times on the rail and then flew away. The passengers all turned and looked at me in stunned silence.

The belted kingfisher is a year-round resident in much of the United States and can be seen along rivers, streams, lakes and fresh or salt water marshes. A male will try to impress a potential mate with the presentation of a fish. He will approach in a low posture with his wings dropped, as if a man on one knee wearing a cape, then stretches the offering out before a female.

A kingfisher pair will mate for life and build a nest on a steep dirt bank near water. The pair will use their chisel-like bill to mine a tunnel into the bank. As their work progresses deeper, they will use their specially adapted feet (with two toes fused together) to shovel out the material. The tunnel will gradually slope upward for about eight feet and end in a wider nest chamber that can accommodate the chicks and parents. The upward slope of the tunnel will prevent any water from
flooding the nest. If a predator ventures to close to the nest entrance the female parent might flutter about on the surface of the water below the nest to distract the intruder. The chicks are born naked and helpless and hardly resemble a bird, but in a little over two weeks they are covered in plumage and look much like the parent.

As their name implies, kingfishers are experts when it comes to hunting their favorite prey. Native Americans believed that tying kingfisher feathers to their bows would cause the arrow to fly as true
as a kingfisher to a fish. To become a master at fishing, the young chicks must enroll in fishing practice with the parents acting as coaches. The parent will catch, then subdue a fish and fly to a perch where the chicks are eagerly waiting for a handout. After a quick tease, the parent will drop the fish into the water below, forcing the chick to dive in after it. With a couple weeks of practice, the chicks graduate to fishing on their own and will soon disperse to claim and actively defend a fishing territory of their own.

The kingfisher is prominent in many legends, myths and stories from various cultures. According to Native American folklore, the feathers on top of the kingfishers head didn’t always form a crest. Old Man, a mythical creator god, was left alone in the cold snowy woods when his hunting companion, Wolf, fell through the river ice while chasing otters. Old Man cried and wailed at the thought of being left alone. Kingfisher, sitting high on a branch witnessed the whole thing, and
laughed at the crying Old Man, who swung his club in anger at Kingfisher, The blow merely grazed the head feathers causing them to stand on end, creating the crest.

In Greek mythology there are a few versions of how the first pair of kingfishers was created. All of the stories pretty much agree that Zeus was displeased with Ceyx and his wife, Alcyone. When Ceyx was at sea, Zeus threw a lightning bolt at the ship causing it to sink resulting in the death of Ceux. Distraught, Alcyone went to the sea to drown herself to be with Ceyx. In a show of mercy, the gods changed them both into kingfishers so that they could be together. The kingfisher was then
known as the Halcyon Bird and the gods would calm the seas for fourteen days near the winter solstice so that Alcyone, now a bird, could care for her eggs that floated on a nest at sea. This time of year is known as the Halcyon Days and represents a tranquil time of peace and calm.
Thus, old mariners always felt that the sight of a kingfisher would protect them from storms and calm the seas.