I have observed many serious beachcombers strolling along the high tide line in what I call the “sea shell shuffle” in search of oceanic prizes cast upon the sandy shores by the spilling waves. In a zombie-like trance, beachcombers appear inebriated as they slowly shuffle in a zig zag pattern with their head downward and upper body swaying from side to side. Then suddenly, sobriety returns as their shelling radar locks in on a target causing them to swiftly walk in a bee line to the object. A squeal of pleasure is often heard over the crashing waves as the item is examined, especially if a starfish is the object of attention. 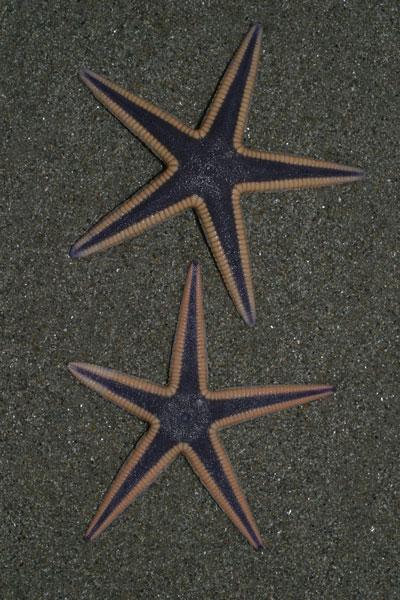 Many stuffy marine biologists would scoff at the term “starfish” since this animal is not a fish at all. The scientifically correct prefer “sea star.” By whatever name, the animal is a type of invertebrate, similar to sand dollars and sea urchins, that are known as echinoderms. Many echinoderms have a rough, tough spiny outer layer that provides protection from predators. The term echinoderm is actually Greek for “hedgehog skin”.
No matter what you call them, these animals are awesomely cool.
Along our beaches you are likely to come across three species of bottom dwelling sea stars; the common sea star, Asterias forbesi, the lined or gray sea star, Luidia clathrata; and the beaded sea star, Astropecten articulatus. All three have five arms, or rays, radiating from a central point. So you can see why these star-shaped creatures in the class Asteroidea, which comes a Greek word meaning starry.
At the end of each thick arm is red eye-spot that can detect movement as well as light and dark. Since they live in a fairly dark and murky environment, perfect sight is not necessary.
At feeding time, these powerful arms will drape over their prey and act like a can opener. With the grip of a gorilla, a common sea star can slowly pry open the shells of a clam or oyster. It is estimated that a clam can produce a 10-pound pull of pressure to keep its shells closed. However, the steady 12-pound pull of a sea star will eventually win this game of tug-of-war. Once there is a small gap between the shells, the sea star will push its stomach out of its mouth and into the shell of the mollusk. The caustic stomach enzymes will render the fleshy tissue into its own version of clam chowder which the stomach will digest before retreating back into the sea star.
Their great arm strength comes from an internal series of canals that create what is called the water vascular system. On the dorsal surface of the common sea star is a small orange disk known as a madreporite that acts as a sieve to filter out impurities and bacteria as water is drawn into the system. The water then provides hydraulic pressure that provides rigidity to thousands of tiny tube feet on the bottom side of the sea star. This is similar to what happens to a flimsy water hose after the water is turned on. Under each arm is a long groove covered with tube feet that end with a suction cup. The water pressure in the tube feet can be controlled to conduct specific feeding, movement and respiration needs. 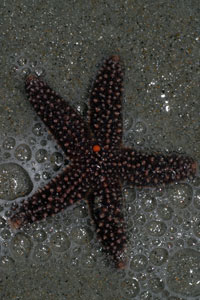 Sea stars can also breathe through tiny structures called papillae that are on the surface of the skin. If these breathing structures become obstructed with seaweed or other debris, the common sea star uses small pincer-like organs, called pedicellaria, to pluck off any undesired objects.
Sea stars are not fleet on their thousands of feet. With a top speed of about thirty inches per minute, they are an easy prey for a few animals. Since a complete set of arms is essential to their survival, sea stars have the remarkable ability to regenerate an arm that may have been chomped off by a predator such as a sea turtle or crab. They also have the ability to instinctively release or shed an arm that is captured by a predator, allowing for a narrow escape. This arm will slowly regenerate at the site of the injury. Some species of sea stars can create an entire sea star from just one arm if part of the central disk is still attached.
The body of a sea star contains numerous plates of calcium carbonate that provide structure to the flesh. Unlike a sand dollar, these plates are not fused and allow for flexibility of their arms. The carbon that makes up these plates is pulled straight from the seawater. About one quarter of the carbon dioxide gas in our atmosphere finds its way into the ocean.  As a greenhouse gas, carbon dioxide in our atmosphere traps heat and helps keep our planet warm. However, too much of this gas is thought to significantly contribute to global warming. When sea stars and other calcifying echinoderms like sea urchins and sea lilies die and decay, their carbon-rich bodies become part of the carbon cycle, and I’m not talking about a fancy expensive racing bicycle. Since echinoderms live on the sea floor, their carbon containing skeletal remains become covered by sediment and are tied up as a carbon sink.
Echinoderms are found in all of the oceans and seas covering our world and many species have up to eighty percent of calcium carbonate fortifying their bodies. So that’s a lot of animals pulling carbon from the water, storing it in their bodies and eventually locking it up in the sea bottom floor. Recent scientific studies estimate that echinoderms sequester about 110 million tons of carbon annually. 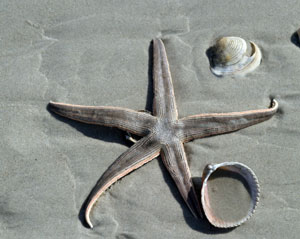 As more carbon dioxide is pumped into the atmosphere, more ends up in our oceans. Even though these calcifying organisms rely on the carbon in the ocean, too much carbon dioxide makes the ocean more acidic. Research suggests that increased acidity could impact the ability of sea stars and other echinoderms to produce calcium carbonate and eventually reduce their role as a carbon sink. It’s important that we have these natural carbon sponges that help reduce the amount of carbon dioxide in our atmosphere.
There is an old story about a young boy throwing sea stars back into the sea after thousands of them had been cast upon beach after a storm. A man approached the boy and asked him why he was going to the trouble to save the sea stars; with so many sea stars on the beach, it wouldn’t make any difference. The boy reached down, picked up a sea star and threw it back into the sea. He then turned to the man and said, “I made a difference to that one”.
So remember, when the challenges that face our environment seem too difficult to overcome, every effort makes a difference.