Just west of the Outer Banks, the shores of the Albemarle and Pamlico sounds are coated with a thick brown hash of mud, muck and decaying plants and trees—organic peat. In boggy areas the peat is overgrown with sphagnum moss and a shrubby hedge so dense that a person dropped into its midst wouldn’t be able to see five feet. The name given to this country is pocosin, an Algonquin Indian word that means “the swamp on a hill.”

It’s the kind of place long thought to be worthless and long treated as such. 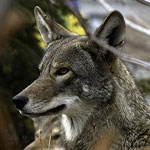 But in the late 1970s, entrepreneurs found a way to wring some economic value out of the region’s pocosins. A company named Peat Methanol Associates applied for state permits to strip the peat soils off the land and burn them to create methanol.

Without herculean efforts on the part of the N.C. Coastal Federation, other conservation groups and many local people, much of the Albemarle Pamlico region would have become a coastal strip mine. Instead, much of that land was eventually protected, making Washington, Tyrrell, Dare and Hyde counties home to a collection of refuges and preserves that make the counties among the wildest areas in eastern North America—wild enough to hold rare red wolves.

What better introduction could visitors have to a coast known for its storms, shipwrecks and culture of hardy individualism?

Home to a melee of plants and animals, pocosins are beautiful, diverse and fascinating—but also buggy and inhospitable. They’re quintessential wild North Carolina. Scientists estimate that 70 percent of the pocosins found in the U.S. are in the Tar Heel State. In a rural region hungry for jobs, Peat Methanol’s proposal to build a peat-burning plant in Tyrrell County was welcome news.

There was only one problem: Stripping off the peat would rob the soils of their ability to absorb rain. Stormwater would course into the estuaries, carrying with it sediments, bacteria and pollution. In 1982 the federation started working with volunteers to reach out to local fishermen about the dangers posed by peat mining.

Fishermen already knew that draining the swamps would hurt fishing, but they weren’t aware of the plans to strip mine and harvest120,000 acres of peat.  The federation not only spread awareness about the peat mining proposals, but it then worked closely with the local community to derail those plans. It was the federation’s first big battle, and it attracted wide attention. Local watermen squared off against some local officials and business boosters.

In the end, Peat Methanol Associates failed to get the permits needed to harvest the peat. About 93,000 acres of prime pocosin went on the auction block. The Richard King Mellon Foundation bought the property on behalf of the Conservation Fund. That land now forms the core of the 113-acre Pocosin Lakes National Wildlife Refuge, home to endangered red wolves and a host of birds, reptiles and mammals.

The refuge headquarters has helped transform the rural town of Columbia into a center for ecotourism. 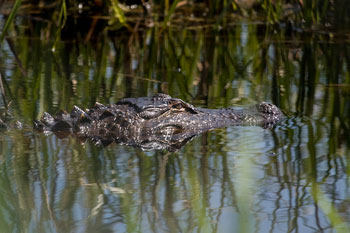 Just to the east lies the 10,000-acre Palmetto Peartree Preserve, set aside by the Conservation Fund as habitat for threatened red-cockaded woodpeckers. Continuing toward the coast, across the drawbridge on U.S. 64 you’ll find the Alligator River National Wildlife Refuge, spanning 28 miles north to south and 15 miles east to west. This refuge was established in 1984 through a land deal brokered by The Nature Conservancy.

In 1987, the U.S. Fish and Wildlife Service released eight red wolves on the Alligator River refuge. The release capped a decades-long search for a place large enough to re-establish a healthy Eastern wolf population. The wolves fanned out across the region, hunting and breeding in the mix of fields, woods and pocosins. By last spring the wolf population, adults and pups, had grown to about 120.

Red wolves are secretive animals, and sightings are rare. Visitors are much more likely to hear them during the refuge’s howling safaris. But with luck visitors will see black bears, deer, and an abundance of birds, especially in the winter when thousands of waterfowl congregate on the Pocosin Lakes and Alligator River refuges and, in Hyde County, the Mattamuskeet, and Swan Quarter wildlife refuges.

Set aside for wildlife in the 1930s, the 50,000-acre Mattamuskeet and 16,400-acre Swan Quarter refuges faced a serious threat in 2004, when the Navy announced plans to build an outlying landing field (OLF) nearby. Pilots would have made thousands of touch-and-go landings, practicing for maneuvers with aircraft carriers at sea.

The Swan Quarter refuge includes a waterfront dock that’s a great place to gain access to Pamlico Sound or just stop for quick walk or picnic. The field would have been close enough to the wildlife refuges to disturb bird populations and the resulting bird strikes would have been hazardous to pilots. In the face of fierce opposition from residents and environmentalists, the Navy dropped its plans in 2007.

Defeat of the OLF preserved the natural beauty of the Albemarle Pamlico region. It’s remote and still buggy, but well worth exploring on your way to the more famous islands of the Outer Banks.

Just off the crowded business district of Kill Devil Hills, a residential street climbs a dune and drops into a diverse deciduous forest called Nags Head Woods. It’s not the kind of place you’d expect to find on a barrier island. Tall ridges with dogwoods, oaks, and beeches drop precipitously into beautiful ponds. The forest owes its existence to the surrounding dunes that protect it from salty maritime winds.

If developers had gotten their way in the late 1970s, the forest would have been clear-cut and the dunes pushed into the ponds, leveling the ground for a residential subdivision. The development process was well underway when area resident Henrietta List formed a grassroots group to save the woods. A road had been cut through and fire hydrants installed. Thanks to List’s efforts, The Nature Conservancy bought the 1,100 acres of the forest and named it the Nags Head Woods Ecological Preserve. The Conservancy built a small visitors center and trails where visitors can hike, watch birds and participate in programs.

The Conservancy also helped preserve Run Hill, the great but little known sand dune north of the woods. Run Hill’s bulk protects the woods. Some of the greatest diversity in the forest is on the dune’s southwest side. But the dune is actively migrating, burying trees as it goes.

A bit further south, the region’s most famous dune, Jockey’s Ridge, owes its existence as a natural area to another Outer Banks conservation heroine, Carolista Fletcher Baum Golden. In 1973 when the ridge was slated for development, Golden took that most radical of conservation steps: She stood in front of a bulldozer that was preparing to carve a chunk out of the dune. The state subsequently obtained 426 acres through purchase and land donations and established Jockey’s Ridge State Park in 1975.

At 110 feet, Jockey’s Ridge was once the tallest dune on the East Coast. But the supply of loose sand that once blew inland from the beach neighborhoods disappeared as land was paved and planted with grass. Since the 1980s the height of the dune has shrunk to 79 feet. When you visit the park, make sure to walk back to its sound side. That’s where the federation is working with park to restore salt marsh. You’ll see an oyster bag sill and marsh plants there.

South of Oregon Inlet in the crook of Hatteras Island, much of what is now the Buxton Woods portion of the N.C. Coastal Reserve was once slated to become a golfing community. In 1985 developers proposed building a 163-acre golf course and houses in the midst of the 3,000-acre maritime forest—the largest such woodland system in the state. The plan appalled a number of local residents, who formed a grassroots group called the Friends of Hatteras Island, which worked closely with the federation. They were worried about saving more than trees and underbrush. 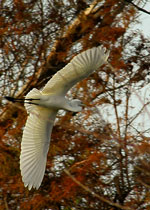 Maritime forests are characterized by dense, salt-pruned foliage that forms a protective cover over shady undergrowth. The forest holds moisture and allows it to seep into the water table. Hydrologists warned that cutting the forest would put the Buxton aquifer and the public drinking supply at risk. Members of the Friends of Hatteras discovered an old map showing that the golf course would have infringed on a state-designated Area of Environmental Concern that included land set aside for an expansion of the public water well field. The discovery effectively killed the golf course.

The state bought the property, creating the Buxton Woods tract of the N.C. Coastal Reserve. The reserve now contains 968 acres and includes several hiking trails. The Buxton Woods ecosystem suffered major damage in 1993 from Hurricane Emily. Hundreds of loblolly pines were broken off. Others were killed during an ensuing outbreak of pine bark beetles. Although the snags are unsightly, the pine canopy is slowly being replaced by oak and cedar, the natural progression for a barrier island forest.

“Quite often people don’t realize the amount of effort that’s involved, or how incredibly complicated the process can be,” said David Owens, director of the state Division of Coastal Management during the fight to save Buxton Woods. “When a community group does manage to preserve a natural area, it’s a real triumph.”

Jan DeBlieu is a longtime resident of the Outer Banks and the author of several books about its natural environment. She was one of the N.C. Coastal Federation’s coastal advocates and managed our office in Manteo. She left us to write a book.