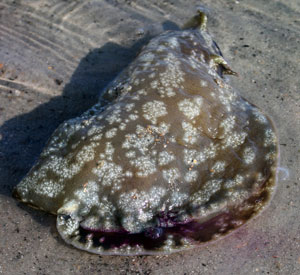 Everybody probably remembers the fable by Aesop about the tortoise and the hare. Well, what about the sea turtle and the hare! Just kidding, but we do have a type of hare that lives in our coastal waters, just not the kind of four legged hare that you are probably thinking of.

Sea hares are without a doubt one of the most intriguing animals you will ever encounter.  Anyone that has spent time wading the shallow beach and marsh waters has most likely come across what appears to be a pulsating blob of mottled brown flesh slowly and steadily swimming by. Most people view sea hares with caution, concern and sometimes disgust and give them a wide berth. This could be from the misconception that has its roots in ancient Greece that a person would die if they touched a sea hare.

Young kids however, are fascinated and drawn to the sea hare like a magnet. I once observed a young boy in the marsh waters behind Bear Island meandering along staring intently into the water.  To no one in particular he loudly exclaimed, “I love these things.” I instinctively
knew what produced this proclamation of joy. The boy then reached down and gently stroked the sea hare as it moved along.

Sea hares are marine gastropod mollusks that do not have an external shell and resemble a big 8- to 10-inch garden slug. They do have a soft thin calcified shell that protects their heart and gill. It is embedded into the mantle and can partially be seen on their dorsal side.

The philosopher Aristotle has been credited with naming the sea hare due to a pair of body parts that, with an active imagination, resembles the long ears of a hare. These are actually head tentacles called rhinophores, which are sensory organs that can detect dissolved chemicals in the water. This gives the sea hare an excellent sense of smell that is essential in locating algae and eel grass. Due to their diet, these herbivore grazers have been referred to as “rabbits of the sea.” The flesh color of the sea hare is the same color of the food that it eats. This provides great camouflage to avoid detection from predators and could easily be mistaken as a dirty sponge by humans.
However, any predators brave enough to nibble on a sea hare will soon regret that decision as their tissue contains a toxin that makes them undesirable.

Since the sea hare cannot retreat into a shell for protection like other gastropods, it does possess another form of defense. When disturbed, the sea hare will eject a cloud of ink similar to an octopus or squid. One would assume that this is a smoke screen to provide cover for a quick escape. Yet remember, this animal is like a slug and can not make a fast get away. The ink is thought to contain chemicals that confuses and interferes with the senses of a potential predator. As a chemical engineer, the sea hare is able to convert harmless algae pigment into this potent ink concoction. The sea hare can then move away from the disoriented predator using one of two methods. It can use the large foot at the base of its soft body to crawl away or it can undulate
wing-like flaps of flesh called parapoda and swim away.

Native Americans would actually use the ink as dye for clothing. Today, some species of sea hares are used in neurobiology research due to a bundle of nerves that makes up their brain. They have the largest neurons of all animals, allowing particular actions to be traced to a single cell. Dr. Eric Kandel’s use of sea hares in understanding how neurons develop memories won him the Noble Prize in physiology in 2000. Also, a chemical in their ink called escapin, has anti-bacterial properties that is being studied to develop compounds to be used in eco-friendly biofilm products applied on boat hulls and other marine equipment.

But the most enjoyable use of this creature is to ponder its mystery as it cruises about in our diverse estuaries.