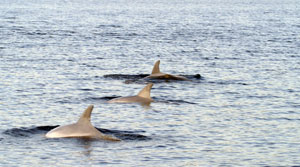 During my life living and working along the coast and spending time on the water I have learned that no species of animal brings more joy, reverence and awe than the magical bottlenose dolphin. They command your full attention and seem to make time fly and stand still at the same time.

Throughout time, the sleek, mystical creatures that cruise the oceans have captivated humankind.  Prehistoric engravings in Africa portray the image of people swimming with dolphins, and 3,500 years ago the ancient Greeks and Romans depicted dolphins in great works of art and stamped their image on coins.  Prominent on many early ships, the symbol of a dolphin was thought to provide protection from a fickle and sometimes angry ocean. Aristotle was the first to document that dolphins were indeed mammals and not a fish.  He noticed that they breathed air, were warm blooded, possessed hair, bore live young and nursed their young.

The dolphins that we see near the ocean shore and swimming in estuarine waters is the coastal bottlenose dolphin. Their sleek sturdy grey body can grow up to nine feet long and weigh up to 700 pounds.  Propelled by a mysteriously powerful tail, bottlenose dolphins usually cruise at a leisurely 3-6 miles per hour.  However, this superior swimmer has a streamlined body perfectly designed to reduce drag and can torpedo through the water at 15-22 miles per hour when chasing fish. They also have a smooth slick outer skin that allows them to easily glide through the water.

This layer of sensitive skin is being replaced almost every two hours and is easily damaged resulting in scars.  These scar patterns are unique to each dolphin and serve as a signature to researchers that study these toothed whales.

The individual characteristics of the dorsal fin are another fingerprint used by researchers. This fin acts as a keel and to keep the body from rolling and also has a thermo-regulating function to dissipate heat and prevent overheating. Their short pectoral fins gracefully maneuver the dolphin and also provide balance and assist with stopping.

Bottlenose dolphins use a variety of methods to snag fish with their cone shaped teeth.  They might individually chase fish or cooperatively work together to corral fish into a tightly packed ball and take turns charging through this “fish in a barrel”. A strong whack of the tail is sometimes used to stun fish for easy eating.  They have also been known to chase groups of fish into the shallows driving them onto a sandbar or muddy bank.  The dolphins will then get a running start and hydroplane on a thin cushion of water to reach the vulnerable flopping fish.  They will then wiggle their way back to deep water.

This method of fishing, however, has some serious risks.  In 1995, I rescued two dolphins that stranded themselves using this technique on a sandbar in Bogue Inlet.  When I reached them the dropping tide had left them in only a few inches of water with more than a hundred feet separating them from deeper water.  I knelt down beside one of the dolphins with my thighs against the midsection of its tail and began splashing water on the exposed skin to help keep it cool.  Feeling my presence the dolphin then used its tail and pushed away from me using my legs as a fulcrum and scooted several feet away.  I knelt down beside it again and it pushed off of me once more, another six feet.  We were on to something!  With the help of a friend who immediately responded to my call for help, the dolphins pushed their way to deep water using the sturdiness of our bodies. They exclaimed their freedom with a few celebratory leaps high out of the water.

This type of intelligent thinking is legendary for dolphins. They have been trained for years to entertain tourists and for use by the military.  By 1964 the CIA was already using dolphins to detect and plant mines; to protect divers; to attach listening devices on ships and to recover lost objects. The military has also researched their ability to determine the shape and location of objects using echolocation.  Dolphins can emit a powerful burst of clicking sounds to create an “echoic image” when the return echo is transmitted to the inner ear.  This keeps them alert for danger and the ability to locate food.

Dolphins are quite social and communicate through whistles and squeak produced from the blowhole.  They also alert each other using sound created by body language activities such as leaping and tail slapping.

A dolphin lover will stumble over their words when trying to explain the spiritual presence they feel when near a dolphin.  My wife once buckled at the knees and passed out when she touched a dolphin named Benny that was rescued and being rehabilitated in Beaufort in 1995.   To Native Americans, the dolphin symbolized the life force, the “keeper of the Sacred breath…”