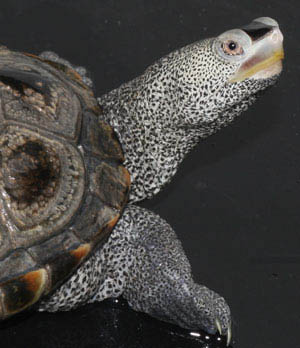 As a kid growing up in coastal North Carolina I spent many a hot summers’ day out on the barrier islands hiking through the sandy dunes, body surfing the ocean waves and walking the moonlit beach looking for ghost crabs.  I would also love to stray over to the sound side of the island and spend a lazy afternoon wading through the shallow waters of Bogue Sound looking for hermit crabs, blue crabs and sting rays. During these excursions it wasn’t unusual to frequently see the head of a small reptile breaking the surface of the water for a fresh gulp of air.

As I grew older, I was always out on the water of our coastal estuaries through pursuits of pleasure and as a career.  I would continue to see the snouts of these creatures bobbing like a cork that has escaped the tether of a fishing line. Now, as over 40 years have passed, I rarely catch a glimpse of this intriguing marsh inhabitant that I consider to have the most stunning coloration of all the turtles.

Yes, the giant sea turtles are the media hogs with their cute little hatchlings dancing down to the ocean, but the diamondback terrapin is just as cool to me.  The terrapins love the brackish coastal marshes. They don’t venture out into the super salty ocean and they don’t swim too far up river where the water is fresh.

The top of their grey to brown shell is covered with scale-like scutes that contain the hieroglyphic looking namesake diamond pattern.  Their shell is excellent body armor, but they are unable to completely seek refuge inside their shell like the terrestrial box turtle.  The light grey skin of their exposed body parts looks as if it has been stained with henna in a tortuous pattern of Mehndi.   These patterns have the uniqueness of a fingerprint to each individual.

Along the Atlantic Coast from Cape Cod to Florida and along the Gulf Coast to Texas, terrapins cruise about the estuaries feeding on fiddler crabs, worms and a favorite food, the periwinkle. Diamondback terrapins don’t grow anywhere near as big as their sea turtle relatives.  The shell of a male will be around five inches while the female is a bit larger at seven inches; one of the largest shells ever recorded was nine inches.  At the end of all four legs are webbed feet with exposed claws.  The rear feet are quite a bit larger, flattened out and well adapted for pushing their streamlined shell through the water.

As a cold blooded reptile they sometimes will crawl ashore to bask in the sun during cooler weather.  When the temperatures dip too low they will dig into the muddy marsh bottom and hibernate for a few months.

The females will also come ashore during high tide in search of a sandy shoreline that will offer easy digging for a nest.  She will deposit eight to 10 leathery eggs, and in about two months the tiny terrapins will make their way into the marsh waters.  If a nest is laid in late summer, chilly temperatures at hatching time may persuade the hatchlings to ride out the winter in the nest and crawl out the following spring.  It’s a good thing that they are cautious about escaping from the nest until conditions are optimal since only one to three percent of the eggs develop a hatchling.

The name terrapin is derived from the Native America Algonquian word “torope,” meaning edible turtles that live in brackish waters.  During the American Revolution, General George Washington fed the hungry bellies of his troops with terrapin meat.  In the late 1800s through the 1920s, terrapin stew and soup was the haute cuisine in the upscale restaurants of big cities along the East Coast.  Demand for terrapin meat was high and the little reptile was almost hunted to extinction.

Salvation from the stew pot came from an unlikely event.  Terrapin soup and stew was rich in essential ingredients, sherry and cream.  The teetotaling ban of sherry during the Prohibition in 1920s caused the consumption of turtle stew to decline and thus a lull in hunting the terrapin.  The high class trend of eating terrapin began to wane and their populations rebounded even though modest harvesting continued. 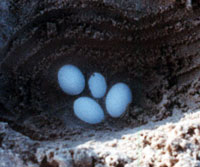 The culinary popularity of terrapin meat demonstrated the potential for a cash fishery.  In 1900, the federal government established the U.S. Fish Commission Marine Laboratory in Beaufort.  During the next 40 years, one of the primary activities at the Beaufort Lab on Pivers Island was to study and raise diamondback terrapins.  More than 250,000 terrapins were raised and released along the east coast to help enhance and reestablish the native populations.

Today, almost all coastal states have put an end to the terrapin fishery and have listed the reptile as endangered, threatened or as a species of concern.  Essential nesting habitat has been lost to development.  Females in search of nesting sites have actually shut down JFK International Airport in New York when they crawled out of the bay and onto the runway.

But the greatest threat to terrapins isn’t airplanes; its crab pots.  Lured by bait into the pot and unable to escape, the turtle will drown if it cannot reach the surface. Close to a million crab pots are dropped into North Carolina waters each year and of those, around 17 percent become abandoned “ghost pots.”   Unless found and removed, these ghost pots continue to kill until the pot deteriorates years later.