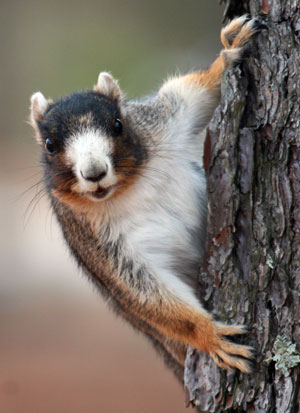 During my career as a park ranger with North Carolina state parks I often received crazy reports of unusual and exotic animals in or near the park.  There have been accounts of mountain lions, wolves and even a kangaroo prowling around. The report of an African black mamba snake turned out to actually be a harmless native hognose snake. I have a faint glimmer of understanding for this misidentification since both snakes are well known for their impersonations of the feared cobra snake. I always welcomed the opportunity to investigate these reports since they offered the chance of seeing something out of the ordinary.

One morning I received a call from a resident who lived near Hammocks Beach State Park in Swansboro screaming excitedly that a badger had just waddled across their yard and climbed into one of their trees. A weasel-like badger in the coastal plain of North Carolina? This I had to see.

Since most unusual sightings like this usually occur late at night after the bars close, I wanted to confirm or bust this daytime sighting. Even though I knew the closest badger was probably hanging out among the patches of native prairie in Ohio, I couldn’t have made it any quicker to the house if I had the ability to teleport myself. Upon arriving at the house, the homeowner was out in the yard keeping an eye on the creature and gesturing wildly at a dark object high up in a large oak
tree.  The animal squirmed about while doing its best to hide in the crook of a big branch. It then stretched out, lying as flat as possible along the branch and remained motionless for about 10 minutes. Finally, the furry creature craned its neck and a black and white face looked straight down at me. For a quick second I was flooded with excitement. It was a badger!  Then reality kicked in and I realized that this guy was way too small for a badger.  A chattering bark-like sound filled the air and, with an irritated whip-like flick of its long fluffy tail, it revealed itself to be a fox squirrel.  Still pretty exciting stuff since fox squirrels had never been documented in or near the park.

Fox squirrels are noticeably bigger than gray squirrels and can have a variety of fur colors depending on their location. In our area they can be mainly grayish, reddish brown or black. They can have a white belly and a face with black and white patches. In some areas they are also called the monkey-faced squirrel or raccoon squirrel due to their facial markings.

Even though it is the largest tree squirrel in North America, it prefers to spend a great deal of time on the ground. They like forests with an open understory that contain nut and seed producing trees such as oak, pine and hickory. There, they can scamper about feasting on the nuts or saving some for later.  Fox squirrels are known as scatter-hoarders due to their practice of burying a supply of nuts at numerous locations. During the lean winter months their great sense of smell will guide them to these underground cupboards. Some of these caches are inevitably lost, however, and the fox squirrel becomes an unwitting Johnny Appleseed when these seeds sprout and grow into trees.
But they are also opportunistic and will eat perishable items such as plant buds, insects, fungi and even bird eggs. 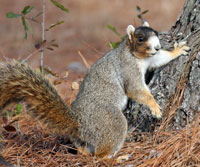 The fox squirrel uses that bushy tail as a blanket and parachute.When not searching for food, the fox squirrel will spend a lot of energy on home repairs.  The honey-do list is long since they maintain up to six separate nests made up of twigs, leaves and pine needles. Some nests, called dreys, are actively used and some are vacant, keeping predators guessing and eliminating the buildup of nest parasites. They will build weather-tight nests for the winter and simple stick nests for the summer.

When threatened by a hawk or bobcat, they will run, similar to a fox, to the safety of the trees. It is here that they demonstrate their gymnastic agility to outmaneuver even the most persistent adversary. With their razor sharp claws, adapted digits, Popeye forearms and strong abdominals, these powerful rodents will race from tree to tree jumping over 15 feet and free-falling over 20 feet to escape predators. During these scampers, their bushy long tail acts as a stabilizer and is used like a parachute during those free falls.  The tail is also an important communication tool with other squirrels and is used as a blanket wrap during cold weather.  Their scientific name, Sciurus niger, even refers to this important appendage.  Sciurus is Greek for “shade tail” and niger is Latin for “dark.”

Fox squirrel populations are in decline, and it’s the same old story — loss of and fragmentation of habitat. Many of the open forests of mature longleaf pine and oak that the squirrel prefers has been converted to loblolly pine farms. The N.C. Natural Heritage Program has listed the fox squirrel as significantly rare and vulnerable to extinction in North Carolina.  However, it is not protected and is still considered a game animal and can be hunted.