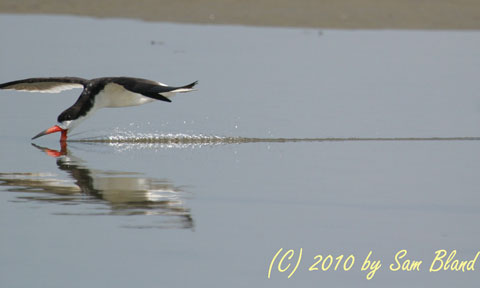 Gliding gracefully above the water searching for a meal, the black skimmer may be one of the most recognizable coastal birds in flight. With a strange oversized beak, stubby red legs and bulky body, the black skimmer appears out of balance and clumsy on land. In the air, however, the skimmer with long delicate pointed wings is elegance aloft as it skims just above the glassy waters of a tidal pool.

Its long two-toned black and red knife-shaped bill is specially adapted for catching fish. Unique to only skimmers, the lower bill is significantly longer than the upper one. As it flies above the water to start fishing, the black skimmer resembles a passenger plane coming in for a landing. It slowly reduces altitude until it is a couple of inches above the water.  Then like landing gear, the bottom bill lowers until it is slicing through the water leaving a plow line in its wake. Like a pair of open scissors, the top bill snaps down as soon as the lower bill comes in contact with a fish. A quick downward nod of the head indicates contact has been made with the prey. Strong neck muscles then allow the bird to snatch the fish out of the water.

Since they feed at dusk, dawn and during the night, black skimmers rely on touch, not sight, to capture prey. Biologists call this method of feeding “tactile foraging.” Not surprisingly then, skimmers have small eyes that are so buried in their black head feathers that it almost looks as if they don’t have any eyes. But these eyes are special, unique only to skimmers. They are the only bird to have cat-like, slit-shaped pupils. The slit pupils allow for better vision at night or during times of low light. They also protect the eye from sun damage because they significantly reduce the amount of bright harsh sunlight reflected off of the sand that enters the eye.

Black skimmers are colonial nesters that raise their young on open sand flats near protected bays and inlets that provide a reliable and ready source of food. They particularly like to nest among the tern species, which are known for their energetic tactics in driving away predators.

The skimmer parents will scratch out a shallow depression in the sand and lay three to five camouflaged eggs. Unlike its parents, the newly hatched chick will have an upper and lower bill of equal length. This will allow the chick to easily pick up the regurgitated prey (fish and crabs) that their parents provide. In about a month the chick will begin to fly and its lower bill will gradually grow longer until the chick will no longer be able to pick up food off the ground. The fledgling must then master the art of skimming to avoid starving to death.

The black and white tuxedo-like coloration of the black skimmer gives a hint to its social nature.  When not nesting, black skimmers continue to enjoy each other’s company. Each fall, small groups will gather into large flocks that migrate south for the winter in search of warmer weather. As evening arrives, skimmers in the group bark and yip. This is why skimmers were once called seadogs in Virginia.  The famed ornithologist Robert Murphy once described black skimmers as “aerial beagles hot on the scent of aerial rabbits”.

As with other colonial nesting birds, great numbers of black skimmers were killed in the mid-1800s for their eggs and feathers.  Their numbers rebounded after laws to protect them were put in place. However, populations are again on the decline.  Intense coastal development and human disturbance have significantly reduced the amount of available nesting habitat. Black skimmers are quite skittish and will completely abandon a nest at the first sign of a threat. Countless birds have died after becoming entangled in carelessly discarded fishing line while feeding.  The Audubon Society now lists the black skimmer as “code yellow,” meaning that their decline is a national conservation concern.  Locally in North Carolina they are listed as a “species of concern” by the N.C. Wildlife Resources Commission.