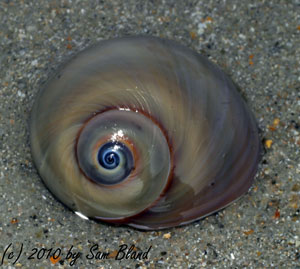 Beachcombers intently surveying a cluster of oceanic gifts that marks the reach of the last high tide sometimes find an eye staring back at them.  This “eye” is the dark spot at the center of a shark eye sea shell.

The smooth, glossy surface of a shark eye just released by the sea looks like a piece of fine china. Streaks of blue accent its grayish color. If unbroken, the perfect shark eye is quickly retrieved by the discerning shell collect. The armor of one of the most fearsome carnivores on the beach then ends up on the mantle where it is greatly admired.

The shark eye, Neverita duplocatus, is in the family of predatory marine mollusks known as the Naticidae, or moon snails.  Close to three hundred species of these snails are found around the world.

The shark eye, which has one shell with a single opening, is a gastropod — “stomach foot” in Latin. They are different from two-shelled bivalves such as oysters and clams. Its shell can be up to five inches in diameter and the fleshy mass spilling out of the shell can be a foot in diameter.

When inflated with water, the animal is usually three to four times larger than the shell. Amazingly, as it ejects the water, the shark eye can squeeze all it body parts back into the shell and then seal the opening with the operculum – Latin for “door.

This soft-bodied animal inside the shell has four major parts: the foot, the body, the mantle and the shell. The bottom of the muscular foot is covered with millions of small cilia, which are hair-like structures that propel the shark eye along the sea bottom on a cushion of mucus as if it were gliding on a magic carpet.  Above the foot is the body, which contains the heart and other vital internal organs. Covering the body is the mantle, a cape of tissue that produces chitin, which forms the protective shell by and hardening it with calcium carbonate. 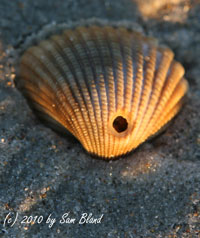 The shark eye uses its powerful foot to bury and plow through the sandy sea floor in search of prey such as clams and other mollusks. Once it finds something to eat, the shark eye’s foot covers its victim. It secretes an acidic enzyme that weakens the shell of its prey, and the tongue-like radula begins its deadly work.  In three quick minutes, the radula will drill a neat hole into the shell. Digestive enzymes will then seep through the opening and soften the flesh of the victim. The radula goes back to work tearing and scooping out the food with thousands of recurved teeth, much like a rasp against a piece of wood.

Along with the shark eye shell, beachcombers also find something that looks like a circular piece of plastic. This is the egg mass “collar” that is frequently washed ashore by heavy surf during a storm.  A fresh egg collar is rubbery and flexible, but after it dries out it is fragile and will easily crack and crumble.

Shark eye eggs are encased in a sheet of thick mucus that wraps around the foot creating the shape of the egg mass.  The mucus is so sticky that sand adheres to it, sandwiching the eggs inside.  After about six weeks, about 100,000 free-swimming larvae will escape the egg collar and enter the food chain.  Those that survive will eventually settle to the sea bottom and become a tiny shark eye trying to avoid predators such as sea stars and rays.  When a shark eye does fall victim to a predator their empty shell does not always find its way to the mantle piece.  One of nature’s resourceful recyclers, the hermit crab, will use the empty shell as its noble home.