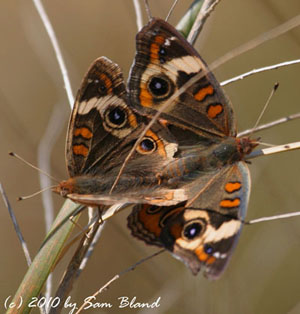 Autumn cool fronts have erased the hazy, sticky humidity that clouds the air, leaving the sky as blue as the eye of a northern gannet. This nip in the air signals the common buckeye butterfly to begin its southern migration along the East Coast. These buckeyes are the latest broods of those that had migrated north for the summer.

The dawn of chilly mornings reveals the silhouettes of butterflies basking on the trunk of a live oak tree, soaking in the warmth of the first rays of the sun. When this solar energy heats their body temperature to above 90 degrees, the cold-blooded buckeye begins to flutter about looking for energy-boosting nectar or the chance to impress a potential mate.

The male buckeye will sit on a perch looking for females and will launch into a fast and erratic flight pattern to check out any flying insect that passes nearby.

Named for its striking pattern of distinctive eyespots on the dorsal side of its wings, the buckeye is one of the most widespread butterflies in the United States. As it zeros in on a buckeye, a young hungry bird it will likely be startled and distracted enough to abort an attack when confronted with large staring eyes.

The buckeye also has different seasonal pigmentation patterns on the ventral side of its wings. In the summer, the color is a light yellow and in the fall a pink rose.  These changes are important for camouflage cover and the heat retention of body heat.

In 2006, the U.S. Postal Service chose the handsome buckeye to grace the 24-cent stamp.