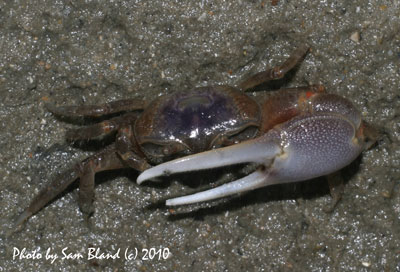 Anyone who has walked through the open sand flats of a salt marsh has probably heard the scurrying of little feet as a carpet of sand fiddler crabs quickly parts like the Red Sea to avoid being crushed by intruding humans. Look down on the purplish colored crustacean, and the male crab will wave his huge Popeye-esque claw up and down as if to say, “I can take you on with one claw tied behind my shell.”

Male sand fiddlers are a feisty lot anyway. The males scuffle and fight so much that part of their scientific name, Uca pugilator, implies that they are boxers. They are, in fact, more like wrestlers. The males use their large meaty claw to push, grab and even flip over other males as they battle over mates. Most fights are nothing more than shoving matches, unless one male is trying to take over another’s burrow.  Then things can turn ugly, and the loss of the big claw is a distinct possibility.

Such a loss can be devastating since the big claw is vital in attracting a female during elaborate courtship displays and to fend off rival males. The males even use the big claw as a drumstick, pounding it and their legs on the ground at night to attract a mate. Females detect the vibrations through a sensory organ on their legs.

After mating, the female carries a fertilized egg mass, called a sponge, on her belly until the eggs develop.  She then releases the larvae into tidal waters on an outgoing tide.  The babies go through a series of developmental stages and metamorphosis while eventually making their way back to the marsh as young fiddler crab. They’ll molt a number of times as they grow larger. Each molt will also regenerate any missing legs or claws.

Fiddler crabs are social creatures that live in large colonies. These neighborhoods are easily recognized by hundreds of small holes in the sandy marsh soil that are the openings to two- to three-foot deep burrows. The crabs use the “L” shaped burrow to mate, rest and to hibernate in the winter and escape the heat in the summer. They also scurry to their burrows to avoid predators such as a hungry white ibis. During high tide, the burrows become storm cellars. The crabs seal the entrances with sand plugs and hunker down to keep from being swept away by strong tidal currents.

Those piles of small sand balls around the burrow openings are from the excavation of the burrow. All this digging is beneficial to the marsh by aerating the soil and by bringing organic matter rich in nutrients to the surface to stimulate the growth of the marsh grass.

Notice the smaller sand balls around a sand fiddler colony. The crabs make these pellets while feeding. Crabs scrape their small claws across the surface of the sand and bring the material to their mouths where they separate edible algae and other organic matter. The crabs form the inedible sand into balls that they place on the ground.

The constant motion of the small claw going from the ground, across the big claw to the mouth reminded a lyrical observer way back yonder of a bow moving across a fiddle. Thus, the fiddler crab was named.