The brown pelican has long been the proud logo of the N.C. Coastal Federation.  We chose this stately bird because it is a symbol of hope, a living reminder that our coastal natural resources can withstand serious challenges. The struggles of the brown pelican, which weathered threats that brought it to the brink of extinction, mirror the challenges that continue to threaten the resources of our coast. 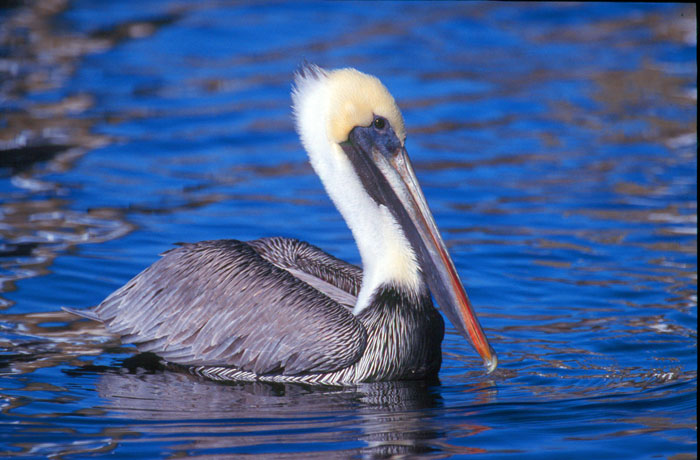 Brown pelicans are resilient and have prevailed despite steep odds. Market hunters shot them by the thousands just for their feathers; commercial fishermen unnecessarily slaughtered them under the mistaken belief that the birds were competitors; and pesticides such as DDT seriously impaired the pelican’s ability to reproduce. Chemical residues collected in stormwater runoff and contaminated the fish that pelicans ate. The chemicals disrupted calcium formation, resulting in pelican eggs that were thin, brittle and unable to develop.  The poisoned fish also killed pelicans directly.

Pelican populations declined dramatically, and the U.S. Fish and Wildlife Service put the bird on the federal endangered species list in 1970, but it took 11 more years for the agency to devise a recovery plan that established sanctuaries, natural areas and wildlife reserves. DDT and some other pesticides were also banned, and the brown pelican began a long and slow recovery. In November 2009, it was removed from the endangered species list along the Atlantic coast and the Florida Gulf coast.

Seeing a large flock of pelicans gliding silently overhead along the barrier islands almost makes you forget all that they have endured. These large birds with a six-foot wingspans look like something out of the age of dinosaurs. Their size is deceiving, since they weigh only eight pounds because of their hollow bones.

The body of an adult pelican is silver-gray with a darker belly and a mainly white head that will turn yellowish during breeding season. These highly social birds nest in colonies on small remote islands that are free of predators. The chicks are naked and helpless but will be covered by a white down about ten days after hatching. They depend on a steady supply of regurgitated fish from the parents while in the nest. As a defense mechanism, the adults and chicks will throw up on human
intruders that venture into the nesting site. 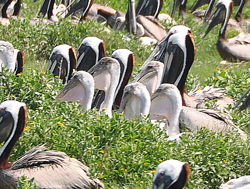 Pelicans have a long bill with a throat pouch that is used for fishing.  Excellent eyesight allows pelicans gliding over the ocean to find mullet or menhaden near the surface.  Once the fish are spotted, the pelican will rotate its upper body downward, stretch out its long neck, tuck back its wings and begin a freefall that ends with an explosive splash on the surface of the water.  Air sacs underneath the skin protect the pelican when it smacks the water after dives as high as 60 feet.  As the long bill pierces the water the pouch will expand scooping up the fish along with about two gallons of water.

After this controlled crash, the pelican will float on the surface and drain the water out of its pouch. Any fish trapped inside the pouch will then be tossed head first down the throat.

This tricky technique takes chicks a while to learn. The parents will fatten them up with about 150 pound of fish during the nine-month fledging period. When new chicks leave the nest they actually weigh more than their parents.  This additional body fat will provide them with the needed energy until they master the circus-like fishing maneuver.

An excellent swimmer, since all four toes are connected by a web of skin, brown pelicans will also swim on the surface of the water lunging after fish.

On the ground brown pelicans appear to be awkward and are clumsy walkers.  In the flight, however, they are grace defined. They fly in groups forming a classic V pattern or a simple long line. They glide along on the wind or in the currents created by their beating wings, called drafting, which reduces the amount of energy needed for flying.  One of the most beautiful coastal sights is a long line of pelican silhouettes skimming just above the ocean surface as they slowly rise and fall like a ribbon undulating in a soft breeze.

Brown pelicans are now a common sight along our coast. However, their future is still uncertain. Loss of nesting habitat, human disturbance of nesting colonies, fishing line entanglement and pollution continue to impact their numbers.  We need to make sure that their future looks promising, since legend has it that when old fishermen die, they will come back as pelicans.