A proposal to extend Carolina Bays Parkway to bypass congestion around Calabash and the Little River and Grand Strand areas in South Carolina is being considered and the transportation departments for both states are holding public hearings for feedback. 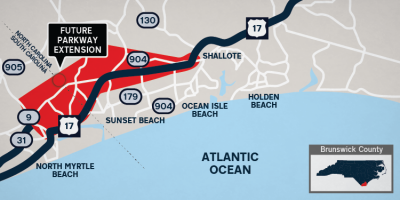 The proposed project is to extend Carolina Bays Parkway, or S.C. 31, from S.C. 9 in Horry County, South Carolina, across the North Carolina state line to U.S. 17 in Brunswick County. Many intersections and roadway segments are expected to either approach or exceed the roadway capacity limits by 2040, according to the North Carolina Department of Transportation.

The project, which calls for a multi-lane freeway on some existing roadways as well as new locations, is intended to ease congestion and delays for local and visitor traffic on area roadways.

Nine corridor concepts have been developed and can be found at the NCDOT Public Meetings website.

The first public meeting is from 4-7 p.m. Tuesday at Sea Trail Convention Center, 75A Clubhouse Road in Sunset Beach. The second public is from 4-7 p.m. Wednesday at VFW Post 10804, 111 State Highway 57 North, Little River, South Carolina. Comments may be submitted by phone or email by Jan. 10.

There will be no formal presentation during the meetings. The public can drop in any time during either meeting to learn more about the proposal, have questions answered and talk with NCDOT representatives. The same project information will be available at both meetings.

NCDOT will provide auxiliary aids and services under the Americans with Disabilities Act for disabled people who wish to participate in this workshop. Anyone requiring special services should contact Diane Wilson, Environmental Analysis Unit, at 919-707-6073 or pdwilson1@ncdot.gov as early as possible so arrangements can be made.

Those who do not speak English, or have a limited ability to read, speak or understand English, may receive interpretive services upon request prior to the meeting by calling 1-800-481-6494.