NORTH TOPSAIL BEACH – Erosion, flooding, storm surge and a migrating inlet that has claimed properties at the north end make this beach town a prime candidate for government buyouts, according to an analysis by the Program for the Study of Developed Shorelines at Western Carolina University. 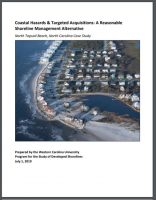 In all, 347 parcels within the northernmost town on Topsail Island have the highest exposure to all of the hazards – erosion, storm surge, inlet migration and flooding – analyzed in the case study released Monday.

“Coastal Hazards & Targeted Acquisitions: A Reasonable Shoreline Management Alternative” makes the case that buyouts of those properties would cost less in the long run than funding shoreline stabilization projects.

By electing to participate in a buyout, the town could avoid spending an estimated $57.6 million in shoreline stabilization projects and sandbag maintenance over 30 years, according to the analysis.

The estimated buyout cost of those 347 properties is $30.1 million, the total assessed value of those parcels based on the latest county property tax revaluation completed in January 2018.

“The whole part of the fiscal analysis is to show even if the town had to pay the entire cost (of a buyout), over time, it would be beneficial,” said Rob Young, who is one of the paper’s authors, program director and coastal geology professor at Western Carolina University.

“I should begin that I have not seen this report until now and no one in North Topsail Beach or our coastal engineers and scientists were consulted or assisted in its preparation,” he said. “Therefore the socioeconomic analysis is [Young’s]. At first blush, he is uninformed of the area that this report concerns. Had he consulted with the Science Panel of the Coastal Resources Commission (CRC) and the personnel of the North Carolina Division of Coastal Management, the inlet hazard area that the town is developing engineering plans to protect is much larger than his report covers. Since the buyout of affected properties he recommends approaches $100M not the $30M he reports, his analysis totally collapses and the North Topsail Beach’s planned effort to stabilize the shoreline adjacent to the inlet and protect the adjacent property is justified using his arguments.”

Young said those who were part of the analysis added up the assessed value for the properties within what the report calls the targeted buyout area, which includes more than 40 acres.“We’ve had it triple checked and peer reviewed,” he said. “I completely expected that there would be a strong reaction to this proposal and that’s OK. This was not meant to be a direct assault on North Topsail Beach.

It was meant to be the first in a series of case studies looking at coastal areas where buyouts would make sense fiscally and environmentally, a way to normalize the discussion of such a possibility in places battling erosion, flooding, storm surge and inlet migration in an age of climate change and sea level rise.

The paper does not identify recommended sources of funds for such buyouts.

Young said buyouts are typically funded through government entities. Property acquired in targeted buyouts are usually deeded to the locality, whether the town or county, and designated under a conservation easement to prevent future development.

Young said that while there are a few areas on North Carolina’s coast that have problems similar to North Topsail Beach, the Onslow County town was a fairly obvious pick to at least initiate discussions about coastal property buyouts.

“North Topsail Beach in North Carolina probably has the largest continuous area that has been in an erosion hot spot for a long time,” he said.

The town is under contract to develop an environmental study for a 2,000-foot-long terminal groin at New River Inlet, a proposed project that officials here hope will curtail chronic erosion the north end has faced for decades.

“North Topsail Beach in North Carolina probably has the largest continuous area that has been in an erosion hot spot for a long time,”

— Rob Young, director, Program for the Study of Developed Shorelines

A terminal groin is a wall-like structure made of rock or other material placed perpendicular to the shore and adjacent to an inlet to control erosion.

More than half of the town’s beach – 6 miles of 11.1 miles – is within a Coastal Barrier Resources Act, or CBRA, boundary.

Owners of property within the CBRA unit cannot participate in the National Flood Insurance Program or apply for a Veterans Affairs loan.

Town officials have for years been fighting to get the town removed from the federal designation.

Amendments to CBRA under H.R. 5787, The Strengthening Coastal Communities Act of 2018, which is designed to create more accurate digital maps of units of the John H. Chafee Coastal Barrier Resources System, or CBRS, removed nearly 80 structures, including the Topsail Reef condominiums, from the designation.

Topsail Reef includes 240 condominium units, making up more than half of the properties identified within the target area.

According to the analysis, the average assessed value of the more than 300 parcels in the targeted area is $87,000, including 35 nonbuildable parcels valued at $100 each.

Over 30 years, the town and county would lose anywhere from a combined estimated $14.9 million to $20.4 million over 30 years if all parcels in the targeted area were to be purchased.

The bottom line is that the projected buyout, including property acquisition, tax revenue loss, structure demolition and removal, and sandbag removal costs, would be less expensive – an estimated $8.3 million without inflation and $2.8 million with inflation – than paying to stabilize the shoreline, according to the paper.

The paper concludes “If outside funds are available for the buyout, then it becomes a very attractive prospect for the municipality; but, it still makes good sense without that support. The savings could be used for dune building, for example. There are many unquantifiable benefits to these targeted acquisitions; however, the real benefit will be a chance to ensure the longer-term economic vitality of the more sustainable portions of the community. This is a way to strengthen North Topsail Beach, not diminish it.”

“The buyouts that I’m familiar are for payouts that are too small for consideration,” Tuman said. “Also, a buyout program fails unless you have 100% participation. Then you are into a property condemnation process, a messy legal and courtroom process.”

“We’ve had buyouts in North Carolina all over our flood plains,” Young said. “The goal here is just to give everybody some number to talk about and to lay out the philosophy of why this might make sense for some coastal communities. We’re just trying to normalize the discussion around this idea.”