This is another in a series of reports on coastal resilience.

HAVELOCK – Hurricane Florence, which made landfall Sept. 14 near Wrightsville Beach as a Category 1 storm, directly caused 22 deaths and was a factor in 30 others, according to the National Hurricane Center Tropical Cyclone Report on Hurricane Florence released Friday. 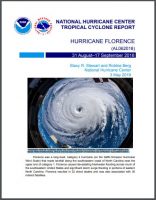 Of those 22 deaths, 15 were in North Carolina, four in South Carolina and three in Virginia, with freshwater flooding causing 17 of those deaths, four by wind and one from a tornado, according to the National Oceanic and Atmospheric Administration.

Wind and water damage caused by Florence totaled about $24 billion, with freshwater flooding causing the most damage to homes and commercial buildings. Most major roads and highways in the southeastern part of the state were left impassable for days.

NOAA scientists have said in previous reports that the buildup of greenhouse gases in the atmosphere prevents heat from Earth’s surface from escaping into space like it used to, and since the ocean absorbs most of that excess heat, upper ocean temperatures have risen dramatically during the past two decades. Warm ocean surface temperatures are the key ingredient in the recipe for hurricanes.

Researchers, nonprofit environmental groups, state agencies and others are set to meet for two days next month to discuss coastal climate risks and management strategies to better prepare for storms like Florence. Registration is open for the North Carolina Coastal Resilience Summit, June 11-12 at the Havelock Tourist and Event Center. Cost to attend is $45.

The summit is being held in response to Gov. Roy Cooper’s Executive Order 80 signed last fall and directing his cabinet agencies to prepare a state Climate Risk Assessment and Resiliency Plan by March 1, 2020.

“A strong clean energy economy combats climate change while creating good jobs and a healthy environment. With historic storms lashing our state, we must combat climate change, make our state more resilient and lessen the impact of future natural disasters,” Cooper said in a news release about the executive order.

According to the Coastal Federation, the summit will provide information on developing the North Carolina Coastal Climate Risk Assessment and Resilience Plan, “so as to propel the coastal region’s preparedness for the effects of climate changes including rising sea levels, increased frequency and severity of coastal and riverine flooding, increasing extreme weather, changing groundwater conditions and other shifting natural conditions. The summit will also showcase a gamut of existing solutions to address the identified challenges.”

The agenda includes panels that are to address a range of topics such as state support for developing a resilience plan, transitioning coastal communities toward resilience, climate change in relation to coastal hazard risk, maintaining climate-ready and productive estuaries, environmental justice and other climate-related issues.

Coastal Federation Senior Policy Analyst Ana Zivanovic-Nenadovic explained that the state Climate Risk Assessment and Resiliency Plan “is intended to guide state agency actions, and help local communities address the consequences of climate change. The goal of the plan is to identify cost-effective strategies to protect human life and health, property, natural and built infrastructure, cultural resources, and other public and private assets of value to North Carolinians.”

Zivanovic-Nenadovic said that the federation is partnering with the diverse group of coastal community stakeholders to coordinate the summit to highlight and evaluate the utility of potential strategies that could be included in the state’s plan, especially as it applies to the coast of North Carolina.

“The DCM is providing funding and we are organizing, coordinating the agenda, speakers and planning the entire event,” Zivanovic-Nenadovic said.

During the summit, attendees will discuss prioritizing current and anticipated climate risks to the coast that will need to be addressed in the resiliency plan; Lessons from recent extreme weather; evaluating existing and potential policies and management measures that address climate risks to coastal communities and the environment; identifying the cost-effectiveness of potential mitigation and adaptation strategies and practices that the plan might include; and determining research and policy gaps that need review and analysis, according to the federation.

Patricia Smith, public information officer for divisions of Coastal Management and Marine Fisheries under the state Department of Environmental Quality, told Coastal Review Online that the North Carolina Coastal Federation approached the Division of Coastal Management in November 2018 with the idea of holding a summit on coastal climate risks.

“Division staff thought that this idea fit well with Gov. Cooper’s Executive Order 80, which had been issued in late October, and that such a meeting would be a great outreach tool for reaching coastal stakeholders,” she said. “Part of the EO80 requires the Department of Environmental Quality to include stakeholder engagement in preparing a North Carolina Climate Risk Assessment and Resiliency Plan to be submitted to the governor by March 1, 2020.”

Smith added that staff had already been in contact with representatives of coastal towns and counties wanting the division to hold regional workshops to help with land-use planning.

“Division staff decided to meet first with local government, managers, planners and emergency management coordinators to discuss the resiliency challenges they are facing and ideas they have for the future. These ideas will be discussed at the June summit, and stakeholder may give their input on them and bring up other ideas they have for resiliency planning,” she said.

Rudolph said that the term “resiliency” had been in the coastal lexicon for some time, “but it’s only been recently a base understanding of what this term means for coastal communities and businesses has really begun to crystallize. The adaptation component is also resonating as evidenced by the reception the North Carolina Climate Risk Assessment and Resiliency Plan has received, and the governor’s executive order as a whole,” he said.

“Understanding the impacts of climate change with respect to the stresses it is placing on the environment, and therefore to the fabric of our coastal community is a key component in developing a path forward, and I‘m looking forward to participating in the summit in all of these regards.”

Jessica Whitehead, North Carolina Sea Grant’s coastal communities hazards adaption specialist and a member of the state’s coastal resiliency work group, told Coastal Review Online the summit will “Be a great overview course on the topic of resiliency for coastal communities, with a focus on case studies and options that are being implemented.”

Whitehead is to participate during both days of the summit, including as moderator for a discussion on climate change and coastal hazard risk and on a “next-steps” panel.

“While earlier meetings have focused on technical audiences, the June summit will provide information in formats that will be accessible for local elected and appointed officials, residents and business representatives, and others interested in the topics,” she said.

Whitehead and other Sea Grant staff regularly work with communities facing challenges related to adaptations for a range of climate impacts, “from today’s flood to tomorrow’s high tide.”

For more information about the summit, contact Zivanovic-Nenadovic at anaz@nccoast.org or 252-393-8185.

The front page featured image for this story is from the cover of the NOAA report and is a panoramic view of Florence Sept. 10, 2018, when the hurricane was at Category 4 strength, as captured by International Space Station Astronaut Alexander Gerst.