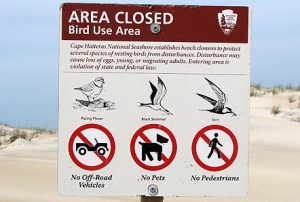 CAPE HATTERAS NATIONAL SEASHORE — The tip of Cape Point closed Monday due to a large colony of least terns that are beginning to nest in the area.

Off-road vehicle ramp 44, which leads to the Point, is open for 0.64 miles, with the last quarter mile of the shoreline bordering Cape Point currently closed.

“The primary (factor) that caused the change is the presence of a fairly large colony of least terns that are setting up,” said National Parks of Eastern North Carolina Superintendent David Hallac. “This morning, there were 50-100 least terns that are beginning to nest at that site, and we also have oystercatchers (in the area) as well.”

Another oystercatcher nest and three piping plover nests have also been identified to the west of the Cape Point area.

Nesting activity began in early April on Cape Point, but a drive-through corridor was established on April 9 to provide access to the Point for roughly a month.

Due to the large tern colony, there is not an estimate of how long the seasonal closure will last, however, the National Park Service will continually monitor the area and install drive-through corridors and reinstate access as soon as possible.

“Generally, bird nests take about 30 days to hatch – and sometimes sooner for terns and plovers – and after that, it takes about three to four weeks for fledgling birds to leave the nesting area,” said Hallac. “But it’s hard to make a (time frame) prediction, because there could be additional terns, and we are starting to see black skimmers show up as well.

“Essentially, it’s hard to predict when it’s going to begin and end when there is colonial nesting activity, as opposed to a lone oystercatcher or piping plover nest.”

As of Monday morning, there were about 27 out of 29 total miles of beach open for ORV vehicles.