MOREHEAD CITY — Gov. Roy Cooper’s office announced Friday that a second round of assistance checks is on the way to North Carolina commercial fishermen affected by Hurricane Florence. 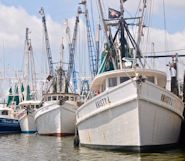 The North Carolina Department of Environmental Quality’s Division of Marine Fisheries is distributing checks from $11.6 million available under the Hurricane Florence Commercial Fishing Assistance Program. The latest distribution includes 1,002 checks totaling more than $7.23 million to fishermen to help compensate for October and November harvest reductions due to Hurricane Florence, according to the governor’s office.

“When the storm hit, coastal communities suffered tremendous damage to homes, businesses, schools and their entire economy,” Cooper said in a statement. “Helping the commercial fishing industry recover is critical for the people and places who rely on it for their livelihood, and these funds are an important boost.”

Cooper’s office said the program is designed to help make up for losses to the state’s $96 million commercial fishing industry, according to 2017 figures from the division, that were related to the storm. It’s part of a package of Hurricane Florence relief efforts Cooper signed into law Dec. 3, 2018. Hurricane Florence severely disrupted North Carolina’s commercial fishing industry throughout fall 2018. The storm destroyed boats, gear and buildings critical to fishing businesses.

The first round of checks to fisherman went out in February and included 678 checks totaling more than $3.2 million to help compensate for a reduced September harvest. Of those, Dare, Carteret and Hyde counties received the largest dollar amounts distributed at $567,234.40, $466,618.01 and $443,151.22, respectively.

In the latest round, Dare, Carteret and Onslow counties received the largest dollar amounts distributed at about $1.47 million, $1.16 million and $1.07 million, respectively.

The distributions are based on reported commercial fishing landings in September, October and November 2018 as compared to the same months in 2015, 2016 and 2017. The state collects records of all marine fish and shellfish sold at North Carolina docks.

Cooper’s office noted the federal disaster declaration for the state’s marine fishing industry that can help with additional relief for commercial fishing families.