WASHINGTON, D.C. — Rechargeable lithium-ion batteries power devices we use every day, including smartphones, laptop computers, watches, cordless tools, electric vehicles and implanted medical devices, but most batteries wind up in landfills, rather than being recycled.

Despite containing valuable and useful metals like cobalt, copper, nickel and lithium, as well as toxic substances such as cadmium and lead, lithium-ion battery recycling has not caught on. But the U.S. Department of Energy is offering incentives to change that.

In celebration of National Battery Day, Feb. 18, the department announced last week that a lithium-ion battery recycling center had opened at Argonne National Laboratory in Lemont, Illinois. The goal is to reclaim and recycle critical materials from spent lithium-ion batteries such as cobalt and lithium in cost-effective recycling processes.

Assistant Secretary for Energy Efficiency and Renewable Energy, or EERE, Daniel Simmons said the effort supports the department’s goal of providing consumers with a range of transportation and energy storage options that are affordable, reliable and secure. 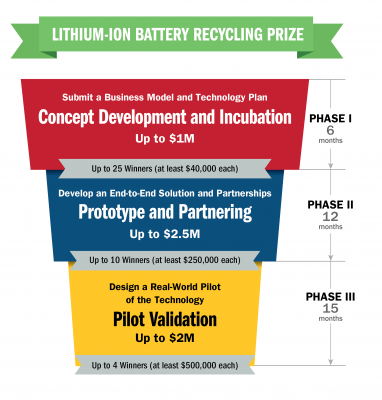 “Partnering with the private sector, National Laboratories, and universities, the Battery Recycling Prize and R&D Center will develop innovative technologies that recover and use recycled materials,” said Simmons. “These efforts will reduce our dependence on foreign sources of critical materials, strengthening America’s economic growth and energy security.”

The department also announced that it will award cash prizes totaling $5.5 million in a three-phase contest designed to accelerate the development of recycling solutions from concept to prototype.

The contest, which was previously announced, encourages American entrepreneurs to find innovative solutions to collecting, storing and transporting discarded lithium-ion batteries for eventual recycling. The prizes are not for recycling lead-acid batteries. The Energy Department said a vast recycling supply chain collects, stores, transports, recycles and re-introduces more than 99 percent of lead back into the lead-acid battery supply chain.

The goal of the recycling center and battery recycling prizes is to develop technologies to profitably capture 90 percent of the key materials of all lithium-based batteries in the United States. Lithium-ion batteries are currently collected and recycled at a rate of less than 5 percent, according to the department.