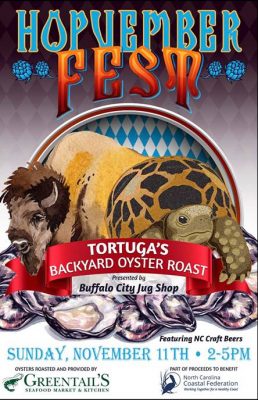 NAGS HEAD – Bring your oyster knife and appetite for North Carolina beers and oysters to the third annual Hopvember Fest 2 to 5 p.m. Sunday at Tortuga’s Lie.

All proceeds of the annual beer and oyster festival will benefit the North Carolina Coastal Federation’s local programming to restore oyster reefs.

Hosted by Tortuga’s Lie and Buffalo City Jug Shop, general admission is free. Oysters and beer will be sold separately at the festival.

Oyster shells from the event will be recycled and used in the federation’s oyster restoration projects in the Outer Banks, according to the release. Oyster reefs help prevent shoreline erosion while creating valuable habitat for other fish.

Oyster shell also provide a base for new oysters to attach to and grow on, increasing oyster populations. An adult oyster is capable of filtering up to 50 gallons of water per day.

Those who are interested in attending the annual Hopvember Fest can learn more at nccoast.org/events or by contacting Erin Fleckenstein at 252-473-1607.