The Chicamacomico Historical Association is planning five days of events, Aug. 13-17, to commemorate the centennial of what is frequently cited as “the most dramatic rescue in U.S. maritime history.”

Many of the events memorializing the rescue of the crew of the Mirlo will be held at the Chicamacomico Life-Saving Station on N.C. 12 at the north end of Rodanthe on Hatteras Island and in the adjacent Rodanthe-Waves-Salvo Community Building. The facility became the Chicamacomico Coast Guard Station in 1915, after the Life-Saving Service became part of the Coast Guard. 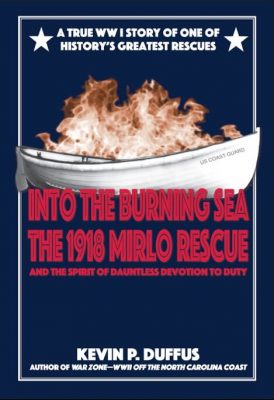 One of those events will be the debut of the “definitive” book on the rescue by historian, author and documentary filmmaker Kevin Duffus titled “Into the Burning Sea: the 1918 Mirlo Rescue.” Duffus will speak during the morning symposium on Aug. 16 in Rodanthe.

Struck by a torpedo fired by German U-boat 117 during World War I and covering the ocean with fire after the ship exploded a second time and split apart, the British tanker Mirlo had three lifeboats in the water. The 400-foot ship was loaded with 6,679 tons of critical aviation fuel and bound from New Orleans to New York, where it was to join a convoy for England.

Deployed within 30 minutes of the alarm being sounded, the Chicamacomico Beebe McClellan self-bailing motor surfboat 1046 — with five crewmen under the command of Keeper John Allen Midgett Jr. — had to attempt four times to cross the rough surf with waves from 15 to 18 feet high before proceeding to the tanker, located between 5 and 7 miles from shore.

Reaching the ship’s first lifeboat, which had capsized, the crew quickly rescued the six seamen clinging to it. Bypassing a destroyed lifeboat and racing farther out to the third lifeboat, they plunged through a gap in the sea of fire and saved 42 of the 51 men on the ship.

Laying to rest in his book the persistent rumor that the Mirlo was sunk by a mine, Duffus produces detailed accounts of the nine mines laid by U-117 — all of which were accounted for within a month by the U.S. Navy Destroyer sent to investigate and recover the mines.

While other rescues stand out, such as Life-Saving Service surfman Rasmus Midgett’s single-handed rescue of 10 men from the sinking barkentine Priscilla in 1899 and the exploits of Richard Etheridge, the first black keeper of the all-black Pea Island Life-Saving Station, several years before, Chicamacomico Historical Association Treasurer Ralph Buxton told the Sentinel the Mirlo rescue remains the most historic and heroic.

“The sheer number of awards they received surpasses every other rescue,” Buxton said, adding that the crew was honored for “courageous and heroic action” in a Navy commendation. The rescuers also received Congressional Gold Life-Saving medals, the Grand Cross of the American Cross of Honor, the U.S. World War I Victory Medal and the U.K Foreign Service Gold Life-Saving Medal.

“The fact that it was World War I is significant, that it occurred so close to our shoreline and that the rescuers persisted through such terrible conditions and went into a burning sea all point to a group of men that really went above and beyond to save lives,” Buxton stated.

In the final stage of being restored by the National Park Service in time for the week of centennial events, the famous motor surfboat that was used in the Mirlo rescue is on permanent loan to Chicamacomico and is housed there.

The surfboat had just been upgraded that spring 100 years ago from an eight-horsepower to 12-horsepower engine, with gasoline being used that would be more resistant to driving through open flames than the more volatile type of fuel previously used.

“That was a real blessing,” Buxton said. “Having that extra horsepower really made a big difference. They had developed confidence in their boat and so, on that fateful day, they did not hesitate.”

Other events slated for the five-day Mirlo Rescue Centennial Week include the 6 p.m. Monday, Aug. 13, artists and buyers opening reception in the Dare County Arts Council Gallery, 300 Queen Elizabeth Ave. in Manteo. A collection of cedar shakes salvaged from the 1911 Chicamacomico Life-Saving Station building and hand painted by local artists will be on display for the remainder of August and then sold by auction.

The Mirlo Rescue Exhibit and Reception will be held 4 p.m. Tuesday, Aug. 14, at the Graveyard of the Atlantic Museum, 59200 Museum Drive, Hatteras. Descendants of the rescuers gather to point out and talk about artifacts on display, followed by a private reception. The display continues through August.

Guided tours of historic Hatteras Island will be available throughout the day from 10 a.m. to 5 p.m. Wednesday, Aug. 15, and a Hospitality Station will be open at the Rodanthe-Waves-Salvo Community Building. There will also be a ticketed dinner at 7 p.m. for descendants of the Mirlo rescuers at the Camp Hatteras Convention Center, 24798 N.C. 12 in Rodanthe.

The Centennial Commemoration of the Mirlo rescue starts at 10 a.m. Thursday, Aug. 16, with the Mirlo Rescue symposium led by Duffus at the Rodanthe-Waves-Salvo Community Building. At 2 p.m. there will be a beach apparatus drill, followed by keynote speaker Adm. Charles Ray, vice commandant of the U.S. Coast Guard, who may be replaced by another senior Coast Guard officer if he is unavailable. This will be followed by a flyover by Coast Guard Air Station Elizabeth City, the laying of the wreath and a band concert at the Life-Saving Station.

There will be a local art fair and festival at the RWS Community Building in Rodanthe from 10 a.m. to 5 p.m. Friday, Aug. 17, with 20 local artists participating. At noon there will be live entertainment and locally sourced food available.

Noting the four years of restoration work and the raising of more than $350,000 in preparation for the centennial, Buxton reflected: “Nowadays, we take technology for granted, but these surfmen didn’t have that. They relied on their own brute strength, fortitude and persistence. And John Allen Midgett was a real leader. He had the inner strength that it took to take on that job and he was determined to succeed.”

“We’re very proud of these men,” Buxton added, “and proud to honor them as part of preserving our heritage.”

This story is provided courtesy of the Outer Banks Sentinel, a weekly Dare County newspaper that is published in print every Wednesday and headquartered at 2910 South Croatan Highway, Nags Head. Aside from the print paper, the Sentinel also produces a continually updated digital version at www.obsentinel.com.

Neel Keller is news editor with the Outer Banks Sentinel.