DAQ said more information was needed on how the proposed facilities would safeguard public health from the toxic gas. 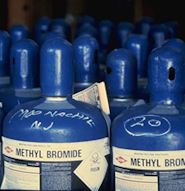 DAQ announced Thursday that a review of current and proposed facilities made it clear there is a need for state regulations for methyl bromide use. Methyl bromide is used as a fumigant and pesticide, is highly toxic and an ozone-depleting compound, according to the EPA. The agency phased out most allowed uses of methyl bromide between 1999 and 2005, but it’s still allowed to fumigate logs, and many countries require that imported logs are treated with the pesticide.

“As more businesses seek to use methyl bromide at log fumigation sites in our state, the lack of specific federal or state regulatory measures for the use of this hazardous air pollutant creates a potential public health risk we must address,” said Mike Abraczinskas, Division of Air Quality Director, in a statement.

In addition to putting on hold the four pending applications, DAQ notified July 26 five facilities in Bladen, Columbus, New Hanover and Wayne counties that in 60 days, DAQ intends to modify the existing permits with “changes to include, but not limited to, appropriate monitoring protocols, record keeping or control measures,” according to the website.

DAQ will recommend the Environmental Management Commission develop a rule to require log fumigation operations to take measures to protect public health, according to the release. DAQ will also ask the Secretaries’ Scientific Advisory Board to consider the need to establish an acceptable ambient level for methyl bromide and to designate it as a state toxic air pollutant.

DAQ is taking action through its permitting process by intending to require permit holders to capture and control a minimum of 90 percent of methyl bromide emissions because.  The state agency’s research indicates that feasible capture and control technologies exist and should be included in all permit applications.

Regarding the Malec Brothers Transport facility in Columbus County, near the Brunswick County line, as proposed it would be the largest methyl bromide log fumigation site in the state. DAQ put on hold the Malec Brothers Transport application, and other pending applications, until it can provide the requested information on additional monitoring and safety measures, specifically, provide a plan for capture and control technology and operation limits to safeguard public health.

DAQ permitting staff will evaluate the information once submitted. More details and associated documents can be found on the DEQ website.

“After additional review, we concluded a multi-faceted approach was vital to safeguard the public health and address the significant community concerns about these facilities,” said Abraczinskas.