In recent years, female humpbacks who live and breed in the southern oceans near Antarctica are having a higher pregnancy rate and giving birth to more calves. 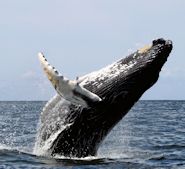 According to a new study co-authored by Duke University-affiliated researchers and published May 2 in the journal Royal Society Open Science, Antarctic humpback whales are recovering from near extinction caused by commercial whaling in the late 19th and most of the 20th centuries.

The end of hunting has fostered the recovery of the mammals whose life spans are roughly comparable to ours, according to Ari Friedlaender, an associate researcher at the University of California Santa Cruz, who led the new study, The New York Times reported. Friedlaender earned his doctorate in ecology from Duke University and was a research professor at the Duke University Marine Lab in Beaufort.

From 2010 to 2016, small skin and blubber samples were taken from 239 males and 268 females using darts. The scientists were led by Logan Pallin, a doctoral student working with Friedlaender. Results indicated that a little more than 60 percent of the females had high progesterone levels in their blubber, indicating that they were pregnant, according to the new study.