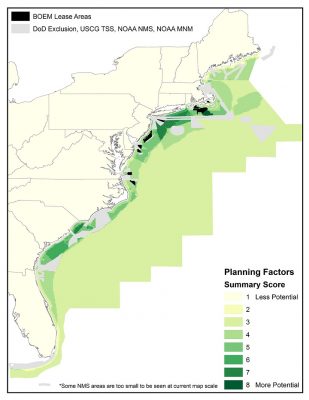 WASHINGTON, D.C. — The Bureau of Ocean Energy Management has extended through July 5 the time for public input on its proposed plan for future renewable leasing off the East Coast.

BOEM announced Friday that the extended deadline is the result of stakeholder requests for an extension of the comment period regarding BOEM’s assessment of all waters off the Atlantic Coast for potential future offshore wind lease locations.

BOEM issued a request for feedback in the Federal Register April 6 seeking public input. That notice originally had a comment period deadline of May 21.

Stakeholders should submit comments electronically or postmarked no later than 11:59 p.m. Eastern Time on July 5 via the following:

To help assess which geographic areas along the Atlantic are the most likely to have highest potential for successful offshore wind development, BOEM said it is considering areas more likely to be excluded that are prohibited by the Outer Continental Shelf Lands Act for leasing, Department of Defense conflict areas and charted marine vessel traffic routes.

Factors that make an area more attractive for future leasing include the following: