TOPSAIL BEACH – This town’s board of commissioners, citing the unacceptable risks to the area’s natural resources and tourism economy, voted Wednesday to approve a resolution opposing offshore drilling. 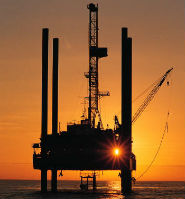 The 3-2 vote to approve the resolution, with Commissioners Linda Stipe and Tom Eggleston opposed, included an automatic “yes” vote from Commissioner Morton Blanchard, who abstained.

The resolution also urges the president and federal officials, the governor and the North Carolina General Assembly to reject policies “that risk the health, safety and sound environmental stewardship of North Carolina’s coastline.” The resolution states that “it is vital that local and state officials throughout North Carolina and its neighboring states take a unified stand in opposition to offshore drilling because a mishap in one jurisdiction could negatively impact the coastal environment and economy of adjacent areas.”

The resolution also opposes seismic testing, exploration and development of oil and gas resources off the North Carolina coast.

“It was not pretty, but it was a resolution,” said Randy Sturgill with the ocean advocacy group Oceana. “Some of the citizens in town along with one new board member pushed the idea. That makes two resolutions in Pender County.”

Now, Sturgill said, drilling opponents in Pender County are turning their attention to convincing the county board of commissioners to adopt a similar resolution.

So far, 201 local government boards have adopted anti-drilling resolutions, including 42 in North Carolina.

“The only two municipalities we’re missing right now are Indian Beach and North Topsail Beach. We get those two and we’ll have 100 percent of the coastal municipalities in North Carolina,” Sturgill said. “It’s a nonpartisan issue but we’re getting bipartisan support.”