I’m looking at the remnants of a long-ago garden plot on Portsmouth Island. Under the weight of summer heat and humidity, the sand is dry, white dust. Surely it is too thin to grow anything nourishing.

“What would they have raised here,” I ask my guide. Collards for sure, he says. Figs, corn, beans, Irish potatoes.

My imagination stops at “Irish potatoes.” It flickers, struggling to make the connection to the rich potato salad I see at every summer fish fry, pig pickin’ and church supper I attend on the N.C. coast. Those potatoes that wrestled harsh barrier island conditions 100 years ago? Cooks stewed them with game, seafood, vegetables or cornmeal dumplings. The potatoes were key to keeping stomachs full.

Today, we like to boil those Irish potatoes and then fold them with chopped hard-boiled eggs into heaps of silky store-bought mayonnaise. We eat so much that we chastise ourselves for consuming all the carbs, calories and cholesterol that come with potato salad.

But it tastes so good, especially when the potatoes and eggs are still a little warm just after you’ve folded in the mayonnaise and maybe a heaping spoonful of sweet pickle relish. The side dish is the perfect mild and creamy counterpoint to a salty, crispy fried fish or a spicy, vinegary pulled pork.

The potato salad I’m talking about is a fairly new recipe in the New World. Spanish explorers brought potatoes from South America to Europe in the 16th century. By the end of the 1500s, French and German cooks were serving cold potatoes dressed with oil, vinegar and salt.

Potatoes were introduced to American farmers in the early 1800s. North Carolina potato farming began later in the century, according to the N.C. Department of Agriculture and Consumer Services. Sandy, coastal soils suited the same potatoes grown in Ireland, white potatoes with brownish skins. Coastal Carolina natives still refer to them as “Irish potatoes.” To this day, most of North Carolina’s potatoes are grown in coastal counties, mainly Beaufort, Camden, Carteret, Currituck, Hyde, Pamlico, Pasquotank, Tyrrell, and Washington.

Picnic-style potato salad we recognize took hold in the second half of the 1800s. Cooks could have made their own mayonnaise with oil and egg yolks. Down South, perhaps they substituted boiled dressing, a tangy-sweet flour-thickened custard containing egg yolks, milk and vinegar that was often used to prepare coleslaw.

Whichever sauce cooks chose didn’t matter much by the start of the 20th century. In 1907, Amelia Schlorer of Philadelphia began selling her own mayonnaise in her family’s grocery store. Around the same time, Richard Hellmann featured his wife’s homemade mayonnaise in salads at his New York City deli. It was so popular that by 1912, Mrs. Hellmann’s mayonnaise was mass marketed.

Source: Evelyn Styron of Hatteras for “Coastal Carolina Cooking” (University of North Carolina Press, 1986). Styron worked for more than 30 years as a restaurant cook, according to the book.

Pinch of Cajun seasoning or cayenne 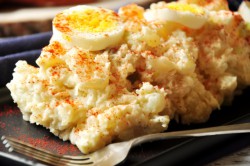 Cook’s note: Mary Foreman, the author of this recipe, says, “I used Colman’s spicy dry mustard. Can use pretty much any vinegar to your liking — red wine, champagne, apple cider or regular white vinegar, and adjust to taste, using more or less. Use 1¼ or more cups of milk to thin for use as a salad dressing. Whisk in until it reaches desired consistency. Depending on the use, fresh herbs or other seasonings can also be added, such as celery seed for coleslaw, or parsley for potatoes.”

Procedure: In a small saucepan, whisk together the flour, sugar and dry mustard until there are no lumps. Add the egg yolks, hot sauce, butter, milk, and lemon juice or vinegar; whisk in well. Place over a medium to medium high heat, and whisking constantly, until mixture is smooth and thick like a custard. Do not allow mixture to actually boil. Remove from heat, whisk in a pinch of Cajun seasoning or cayenne and salt, and set aside to cool, then store in refrigerator. Makes about 1¼ cups. Excellent for coleslaw, vegetable and potato salads.