Hardly a cook on the N.C. coast gets through the Thanksgiving season without thinking about oyster stuffing.

The name itself evokes visions of plump oysters hidden in a fluffy blend of herbs, breadcrumbs and rich stock, a dish so luxurious it begs a silver dish rather than a place inside the holiday turkey.

Oyster stuffing is a Southern dish that sounds American. Pilgrims found oysters up to a foot long when they landed in the New World. Alas, nothing about Thanksgiving traditions seem to match true history, as is the case with oyster stuffing. 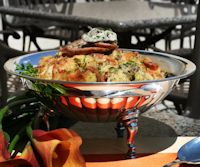 “While Native Americans may have combined oysters with grains and herbs we do not find evidence they used this combination to stuff fowl. Classic American oyster stuffing appears to have been a gift from our European forefathers,” according toThe Food Timeline.

“Culinary evidence suggests the French originated oyster dressings in conjunction with modern cuisine (17th century). This practice was adopted by the English and neighboring countries.”

By the 1700s, American cookbooks offered oyster stuffing recipes, the oldest of which were printed in the southern colonies. These days, oyster stuffing is most common in Cajun and Creole cuisine, where oysters are plentiful and much loved, but with so many oysters along America’s East Coast, the recipe found fans far north, too.

A recipe for “Roast Turkey” in the Boston Cooking School Cook Book that Mrs. D.A. Lincoln wrote in the 1800s directs cooks to add oysters to a stuffing of “soft bread or cracker crumbs highly seasoned with sage, thyme, salt and pepper” and moistened with melted butter, a little water and an egg.

Chopped salt pork is an option, Lincoln noted, but “stuffing is more wholesome without it,” she advised.

Her point is worth consideration. Surprising to diners who try oyster stuffing for the first time is how little flavor and texture the shellfish might provide. Their delicate taste and texture may get lost in the bread and, if stuffed into the turkey, overwhelmed by the bird’s flavor.

That’s not to say oyster stuffing is not due to the lovely oysters that go into it. If placed inside the turkey, the dish is called “stuffing.” If baked in a pan all its own, the recipe is called “dressing,” perhaps a better choice for this elegant dish. Plenty of oysters and their juices given a gentle turn into plain crushed crackers is a special treat never, of course, to be drowned in gravy.