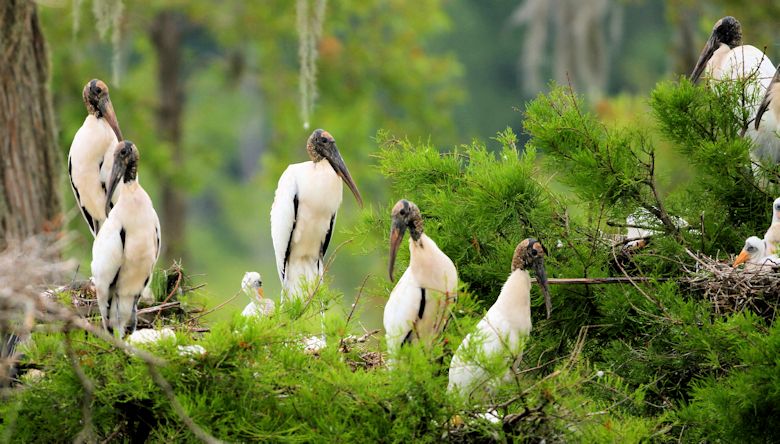 Birds like wood storks nest in large colonies to protect their chicks from predators. There is strength in numbers, and if a predator does get through the defenses the loss of one chick doesn’t threaten the health of the colony.

There are a number of natural wonders that I look forward to each year, such as the huge female loggerhead sea turtles crawling ashore to nest on the barrier island beaches. Then, 60 days later, watching the tiny hatchlings boil out of the sunbaked sand and race instinctually across the beach and into their salty ocean home.

On these humid summer nights, I am also delighted when the surf is active with the magic of natural fireworks. With a coating of sticky salt spray clinging to my skin, I wade into the swash zone and splash the water with my feet to activate the bioluminescence of plankton.

I feel these wonders are gifts to savor since their occurrence is fickle. But this is also a time of year when I can indulge in another spectacular spectacle of nature: colonial nesting bird sites.

A number of waterbirds such as pelicans, terns, herons and egrets nest in large groups called colonies at many sites throughout the N.C. coast. Observing hundreds to thousands of birds clustered together is a stimulating experience that can overwhelm the senses with sights, sounds and smells. A colony of birds can consist of just one species or it may be a mixture of species.

It is thought that these birds have evolved nesting together as a way to defend themselves. With the nests scattered out over a wide area, there are a multitude of birds that act as sentinels to detect threats from all sides and signal the alarm to the entire group. Many of the colonial species are well known to attack intruders, and a large group has greater firepower to intimidate even the toughest aggressor. If a predator does penetrate these defenses, the volume of available prey results in some birds being sacrificed for the safety of the colony. This is like the old story about the slowest runner in a group being chased by a bear. One doesn’t make it, but the rest of the group survives.

Over the years, I have been fortunate to observe and study nesting shorebirds on the open sandy spits of barrier islands, mostly least and common terns. I have also visited heronries on small isolated islands in the estuaries to see egrets and herons feeding their chicks. However, recently I was given the opportunity to visit a secret site that is one of only two in North Carolina where an endangered species is raising its young.

The site was discovered in 2005 when a wildlife biologist, David Allen with the N.C. Wildlife Resources Commission, conducted an aerial search for the rookery after receiving a tip about the site. Allen located what turned out to be the first known colony of nesting wood storks in North Carolina. The 95-acre site is a privately owned wetland in the southeastern part of the state. That year, 32 active wood stork nests were documented at the site. Since then, the number of nests has dramatically increased with a high of 220 in 2010.

I sort of discovered the site myself through a tip. My tip, however, was from a Facebook post. With an endangered species nesting so close by, I went about investigating how I could access the site. With the gracious approval of the landowner and the wildlife biologist monitoring the site, I headed out one recent morning to see some wood storks.

After a few hours’ drive, I knew that I was getting close as a gargantuan white bird with black wing tips flew overhead just above the tree line. It looked like an ibis on steroids. Then, after a wrong turn, I arrived at the wetland owner’s property. He escorted me out to the site and explained the lay of the land. As he talked, it was hard for me to focus as I was distracted by the wood storks gliding above, in and out of the wetland. As the owner left, he cautioned about alligators and said, “Hope you brought some bug spray.” And I was left to explore on my own.

The wetland was once an open lake with cypress trees popular for fishing. Over the years, submerged aquatic vegetation, duckweed and elodea, have smothered the lake, leaving only patches of open water.

I slid my kayak into the thick weeds lining the shore, confident that there was water under the boat. Shoving through a skin of vegetation laying on top of the water, I made my way out into an open area where a few turtles eyed my progress. The cover of a grey sky threatening rain was now cracking open with slivers of a clear blue sky. Frogs of numerous species radiated an uncoordinated clutter of sounds that reminded me of an orchestra warming up. Only the low groan of a bullfrog kept a rhythm in an attempt to harmonize. 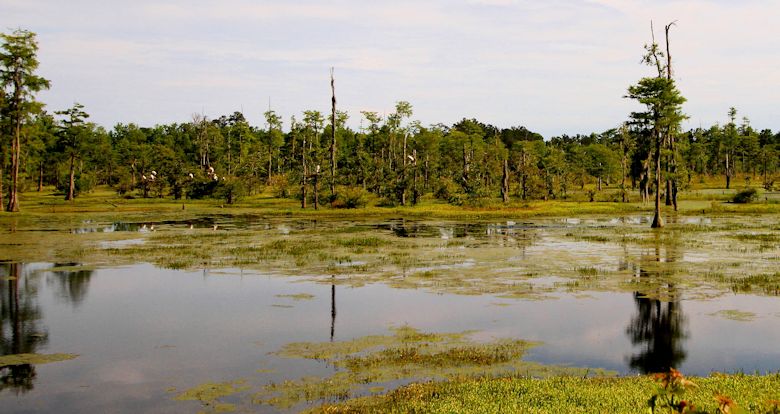 Thirty-two pairs of wood storks were discovered to be nesting in this wetland along the southeast N.C. coast. There are now more than 200 pairs nesting there. Wetlands like these are important for the survival of numerous coastal species.

Out before me were clusters of cypress trees dripping with long, ropy strands of Spanish moss. These trees were adorned with big stick platforms that were constructed by the male and female wood storks.

Now, I must admit, heading out to see wood storks isn’t what you do if you are expecting to see a bird of great beauty. The beauty of their white, luxurious plumage is in sharp contrast to the dark, bare skin on their head and neck that refuses this to be called a handsome bird. Fuzzy, wobbly white chicks with ample, yellowish beaks were secure under the towering presence of a parent as they peaked out from above the twigs of the nest.

All over the wetland, wood storks built nests on the cypress and other trees, many of which held multiple nests. This type of wetland and the swamps that surround it are ideal for the wood stork, which was listed as an endangered species in 1984. During nesting, the storks need a massive amount of food, such as fish and frogs, to supply their appetite and that of their chicks that feed 15 times a day. It is estimated that they need over 400 pounds to get them through the breeding season.

Research indicates that dry conditions concentrate their prey into smaller bodies of water, making it easier for them to catch the large quantities necessary for the chicks. Their breeding cycle may even be prompted or delayed by the wet or dry conditions of the swamps.

The space above the wetland was an air traffic controller’s nightmare with storks coming and going at various altitudes. Departing birds were off in search of food in the creeks and swamps where they will submerge their sturdy, partially open bill into waters six to 10 inches deep. When prey comes in contact with the bill it will snap shut lightning fast. So fast, at 25 milliseconds, that it is probably the fastest reflex of any vertebrate. This method of feeding is known by biologist as tacto-location or grope feeding.

If necessary, they will fly 50 to 80 miles in search of food, at times soaring as high as 6,000 feet to take advantage of air currents to conserve energy. A superb aerialist, the storks fly and descend with their head and legs fully extended. They will, at times, make erratic sharp turns and steep dives as they approach landing.

As I paddled around the wetlands, I could hear faint, croak-like sounds from the adults and chattering coming from the chicks. Most of the adults stood motionless, hovering above the chicks with their heads pointed downward as if they were holding a prayer meeting. This statuesque profile is why these birds are also known as “preacher birds.” One adult bird even held its wings down and open as if to shield the chick from the sun.

Making my way through the maze of the open water created by the thick aquatic vegetation, I discovered a nest of three large chicks with ruby eyes, a dagger-like bill and their breast stained the color of a copper peach. Not far away, one of its parents, a large black bird with silver streaks tracing its back, observed me from its perch. It was an anhinga, another waterbird taking advantage of this nesting area.

The name is a Brazilian word that means devil bird. This bird is adapted to swim after fish, which it spears with its sharp bill. Most waterbirds preen their feathers with a waterproofing oil to keep them dry and buoyant. An anhinga, however, lacks this ability in order to swim underwater chasing after fish. As it swims at the surface of the water, only the serpentine neck and head are above the water resulting in its other name: snakebird.

During my wetland excursion, I tried to make my way into some of the areas with thick aquatic vegetation, but my progress was quickly stalled. As I sat there, I heard splashing behind me and turned around in time to see a female wood duck swimming with a train of tiny chicks behind her. When we made eye contact, she kicked it into overdrive causing a rooster tail of water to fly high into the air and rain down on her chicks as she charged for cover. She found an opening in the vegetation and they all disappeared.

By now, the sky was completely blue and the sun was warm and toasty. I paddled towards dry land and mentally checked off other birds I had seen: ibis, green herons, great egrets, cattle egrets, great blue herons, moorhen and an osprey. For the wood stork to survive, as well as other wildlife that depends on it, wetlands must be protected, restored and enhanced.

I paddled my kayak to shore and pulled it onto the bank. As I stood there looking over this enchanted wetland, a large alligator surfaced about 30 feet away, briefly eyed me over and melted back into the water.