RALEIGH — Hours before yesterday’s press conference where North Carolina’s top environmental regulators tried to defend the state’s clean-up efforts after the Dan River coal ash spill, news broke that U.S. prosecutors have issued another round of subpoenas that expand the federal probe of the state’s oversight to all coal ash ponds, including three near Wilmington.

The U.S. attorney’s office in Raleigh issued the first round of subpoenas a week ago seeking records about a coal ash spill on Feb. 2 at a retired Duke Energy power plant that dumped about 40,000 tons of toxic coal ash slurry into the Dan River in the northern Piedmont.

The new subpoenas issued Tuesday widen the probe to all of Duke’s 32 ash ponds at 14 active or retired coal-fired power plants in the state. Included in that number are three ponds at Duke’s Sutton Plant
north of Wilmington. Those ponds border a popular public lake where a researcher has found high levels of toxins in the sediment and an unusually high number of deformed fish.

Close to two dozen employees of the state Department of Environment and Natural Resources, or DENR, were also subpoenaed to testify next month before a grand jury in Raleigh about any payments or items of value they might have received or made from Duke Energy or its predecessor company Progress Energy or Carolina Power & Light. The department was ordered to produce their personnel files. Among those ordered to appear are DENR officials in the department’s Wilmington and Washington offices in charge of water quality and aquifer protection and their Raleigh-based supervisors.

“People will go to jail if these subpoenas uncover that criminal behavior is endangering our rivers and public health,” said Todd Miller, executive director of the N.C. Coastal Federation.  “Let’s hope that’s not the case, and instead this is a tragic but inevitable consequence of lax environmental enforcement caused by agency leaders who strive to appease polluters.”

At the press conference yesterday at DENR offices in Raleigh, spokesman Drew Elliot and John Skvarla, the department’s secretary, refused to answer questions related to the subpoenas, citing policy about ongoing investigations.

Skvarla said the agency had not opened an internal investigation into the issues cited by federal prosecutors, whose initial round of requests sought information about the Dan River plant’s permits, inspection records, sampling results and all communication between DENR and Duke Energy and subcontractors for both working at the site.

Skvarla said that under his leadership DENR was being far more proactive about the ash ponds than previous administrations. Gov. Pat McCrory appointed Skvarla, a Raleigh businessman, last year to head the department.

DENR, Skvarla said, considers itself “partners” with environmental groups seeking cleanup of the sites, but disagreed with what he called their “one size fits all” approach. The groups, he said, only wanted to see the sites dug up and the coal ash transported to lined landfills. In some cases, he said, that would be the worst thing to do for the environment.

Most of the ponds are not lined, and environmental groups that are fighting to close them are worried about indications of groundwater contamination at all 14 sites. 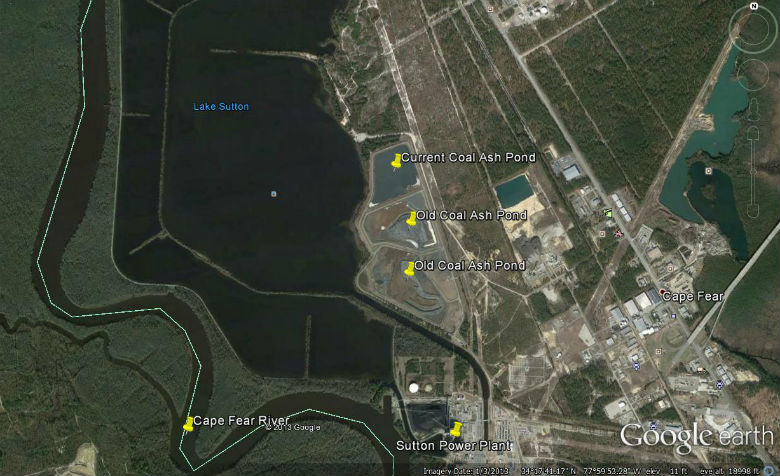 This Google Earth image shows the Sutton Power Plant north of Wilmington and the three coal ash ponds that border Lake Sutton, a popular fishing lake that was built as a cooling pond for the power plant.

At a meeting Monday on the coal ash spill by the legislature’s Environmental Review Commission, Cape Fear Riverkeeper Kent Burdette stressed the need for DENR to take action not just to prevent a major spill like the one in the Dan River, but also to get a better handle on how the heavy metals that are the ash’s toxic signature are ending up in public waters.

Burdette said an extensive study released in October by Dennis Lemly, a Wake Forest University researcher and an expert on selenium contamination of fisheries, showed that the sediment at Lake Sutton, the 1,100-acre reservoir next to Duke’s Sutton Plant near Wilmington, contains high levels of selenium, a likely cause for the high rates of deformities that Lemly found in the lake’s fish. In one sample, almost 30 percent of the small bluegill had skeletal deformities. Coal ash from the Sutton plant is stored in three ponds bordering the lake.

Burdette said the state has not done enough to inform the public of the danger at the lake, a popular fishing spot favored for its largemouth bass. “When Sutton Lake fish are brought home to dinner tables,” he told legislators, “the selenium goes with them.”

Selenium is a natural element that in trace amounts is essential to good human health. It’s a common ingredient in coal ash, however, and when released in the environment in large amounts selenium is a persistent poison that has well-documented effects on fish reproduction and growth.

Belews Lake in Surry County remains the poster child of selenium contamination in the U.S. It was created in 1973 to provide cooling water for Duke’s Belews Creek Steam Station, the largest coal-fired power plant in the state. Duke discharged selenium-laced water into the lake for more than a decade. As selenium accumulated in the lake, the 20 resident species of fish started showing deformities to the spine, head, fins and eyes. Largemouth bass stopped reproducing, and the state issued advisories about eating fish from the lake.

Duke stopped discharging wastewater into Belews in 1986, but long-term studies by Lemly and other researchers showed that the ill effects persisted long after the source of pollution was gone. As late as 2002, high numbers of deformed fish were still being found in the lake.

In an interview Tuesday, Burdette said the state Wildlife Resources Commission recently expanded a boat ramp and fishing pier at Lake Sutton and during heavy use there are as many as 300 boats on the lake and dozens of people fishing from the pier. Few are aware, he said, that less than 300 yards away is the outlet for runoff from coal ash ponds.

Although he’s concerned about the high levels of selenium and heavy metals, Burdette did not downplay the area’s risk that a Dan River-like spill could happen on the Cape Fear, which after passing the plant and lake  winds another 4.2 miles before reaching downtown Wilmington.

The Sutton plant’s three ponds, which sit close to the lake, cover roughly 135 acres and contain 745 million gallons of coal ash slurry more than three times the amount at the Dan River plant. The two main ponds at the plant are on the EPA’s list of sites with a significant hazard risk.

“What the spill points out is that the ponds and berms are not highly engineered structures that aren’t likely to fail,” he said. “I think it’s the opposite.”

He said heavy rains in 2010 caused a breach at one of the ponds at Sutton spilling a large amount of coal ash slurry on the east side of the site. The direction of the spill was fortunate he said, but had the other side of the pond given way instead, the ash would have gone straight into the lake.

“That was during a heavy rain, not a hurricane,” he said.

Burdette said the state also needs to increase its focus on groundwater contamination, especially in the coastal plain where surface waterways and groundwater interact and the flow through the aquifer systems is difficult to predict.

Rewetted drained pocosin can do a lot, like store tons of CO2

A cycle of septic repairs, washouts on park service beaches
Support the coastal news you value.CoastalReview.org is an award-winning, nonprofit news service providing unbiased, in-depth and investigative reporting about issues on the North Carolina coast. Your support makes our work possible. Please join the CRO Press Club or put your business in the Sponsor Spotlight to support the coverage your care about. Learn MoreGive or Sponsor