All around us are signs that summer is waning and fall is just a cool front away.  Here is my list of clues that our natural world is in a stage of transition and crisp cooler weather is on the way to replace the sticky muggy days of summer.

The Mullet Are Jumping: Big striped mullet, also called jumping mullet, are already leaping through the air and slapping the water. Their jumping behavior is thought to be an evasive maneuver to escape predators and to aid in breathing while in waters with low oxygen. When a large group of mullet jump out of the water with speed and purpose, they are racing away from danger. When you see a lone mullet jump lazily out of the water landing on its side it is taking in some oxygen. Research also suggests this style of jumping may be a way to dislodge parasites from their gills.

This silver green fish isn’t well thought of as the center piece of a fine meal due to its oily flesh and because it is a favorite of fishermen to use as bait for red drum. However, I have enjoyed a fresh mullet cooked over the grill by someone with enough culinary skills to make this fish tasty. For generations, this lowly fish has been harvested by hardy fishermen with hands rough and calloused from pulling in heavy nets laden with mullet, fat with the prized orangish-red eggs of the females. This roe is a delicacy in Japan and other Far East countries. This dying breed of fisherman will bide their time until the strong autumn cold fronts blast winds from the northeast, known as a “mullet blow,” chilling the water and igniting a mullet run.

Fattening Grapes on the Vine: The fat muscadine grapes are hanging heavy with tasty pulp which is causing them to lose their battle with gravity and fall off the vine. This naturally occurring vine has been cultivated for centuries, producing many different varieties such as the popular Scuppernong. What is thought to be one of the oldest grape vines in the world is a Scuppernong muscadine vine known as the “Mother Vine” on Roanoke Island. Over the centuries it has survived the howling salt-filled winds of many hurricanes; however a few years ago, the Mother Vine was nursed back to health after being mistakenly sprayed with an herbicide.

These grapes contain ellagic acid and resveratrol which show great promise in their ability to prevent cancer tumor growth. Muscadine grapes have long been used to make wine, juice and jelly. A coworker of mine once decided that he would attempt to make a batch of jelly. Without caution, he went headlong into a shrub thicket covered with the vine and emerged with a bucket brimming with the thick skinned dark purple grape. He created the finest jelly ever to grace a peanut butter. Yet, he never cooked up another batch as he also filled his underwear full of chiggers as he harvested the berries. He is still itching today.

The Silence of the Buntings: The sweet song of our colorful summer visitors has fallen silent as the male painted buntings have found it unnecessary to sing for a mate. They have returned to their secretive ways within the dense maritime shrub thickets, no longer pining from an exposed perch for the attention of a female. With the breeding season over, the males, pale green females and fledglings are preparing for the demanding and hazardous return trip to lower Florida and Cuba. Keep those feeders full of white millet until October to help these beauties put on a layer of fat necessary to fuel them on their travels.

The Waning Light: Although it has been barely perceptible on a daily basis, we will have lost over two hours and twenty minutes of sunlight between the summer solstice on June 21 and the fall equinox on Sept. 22. In about a week, the length of darkness will exceed the sunlight hours until next spring.

The length of daylight and nighttime hours causes physical changes in plants and animals and is called photoperiodism. The shorter days will trigger migration and mating behavior in some animals as well as changes in the color and thickness of fur. Birds will molt new feathers, some plants will lose their leaves and some will flower. 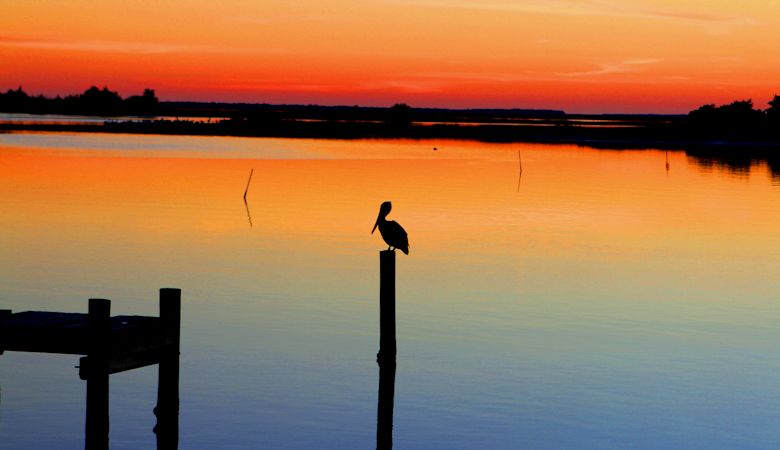 We have lost almost 2.5 hours of daylight since the solstice on June 21. Soon there will be more night than day.

Deer Rubbings: The male white-tailed deer are rubbing their antlers on the base of cedar trees trying to remove the once dark brown velvety covering that has now dried up and turned pale. The antler velvet is a hairy skin that supplies blood necessary for the antlers to grow. During growth, while in velvet, the antler is soft and vulnerable to injury. If the antler is damaged during this stage it can result in unusual deformities of the antler. As fall approaches, blood flow to the antler stops, causing the velvet to split and slough off in bloody dangling ropes. The antlers will soon shine like a sun bleached bone and the males will be sparring for dominance to breed with the females.

A Riot of Goldenrod: Seaside goldenrod plants are just beginning to show a hint of yellow and will be adding some color to the dunes along the barrier islands. During their fall migration, monarch butterflies will seek out the goldenrod as a nectar source to fuel them on their way to Mexico. This tough plant can tolerate the harshness of the beach environment and is thus used for dune and wildlife habitat restoration projects.

A Bear in the Night Sky: The night sky is in transition with the big dipper making its way to the low northern horizon. This pattern of stars is known as an asterism and is within the constellation Ursa Major, the Big Bear. The big dipper forms the tail and rump of the bear image. There are many Native American legends of the night sky concerning the big dipper. One of these stories relates that the low position of the big dipper on the horizon is an indication that the bear is coming back to earth to hibernate with the other animals.

An American Beauty: Among the maritime shrubs, American beautyberry has exploded with their purple berries screaming for attention. This plant lives up to its name and is a popular landscaping plant. Its leaves and berries are an important food source for birds, deer, raccoons and foxes. The Native Americans used all parts of this plant to make teas and other treatments for a variety of medicinal uses such as dizziness and stomach aches. Some of the chemicals in this plant are being studied for their ability to repel mosquitoes, ticks and fire ants.

If you’re counting, that’s nine natural signs of fall. Go to this story’s posting on the federation’s Facebook page and add a tenth.