Beautiful, multi-colored coquina clams live in dense colonies at the water’s edge. There, they need to be swift diggers to survive.

EMERALD ISLE — The recent uncharacteristically mild August temperatures encouraged me to take advantage of the dog-less days of summer and spend the afternoon on the beach.

As I crested the dunes, the scent of sunscreen lingered in the salty breeze, remnants from tourists down the beach who had lathered up to avoid scalding sunburn. I found a spot away from the crowd and settled into my beach chair about halfway between the aqua-colored water and the elegant primary dunes that sported a wall of slender-stalked sea oats busting with seed heads. I stared out into the ocean horizon broken only by a few, small, fluffy clouds and soon fell victim to the ocean’s lullaby.

Sometime later, I sluggishly awoke and glanced about to get my bearings. I immediately saw a pair of black eyes popping up like periscopes from the rim of a hole at the base of a sand dune. These stalked eyes belong to one of the ghost crabs that reside along the open beach and in the sand dunes. The crabs  are capable of seeing 360 degrees to detect potential predators and prey. Their only blind spot is directly overhead.

This crab slowly moved out of its burrow to reveal a sandy colored box-shaped shell, four pairs of hairy walking legs and a pair of formidable-looking claws. Underneath the legs was a ball of sand, which the crab deposited next to the burrow entrance of its tunnel, which I knew extended four feet under the sand. Only an adult male ghost crab will drop the excavated material next to the burrow. Female and young crabs will sling and scatter the sand away from the opening. This behavior allows female ghost crabs to easily find a mate.

In the tunneIs ghost crabs find shelter from the hot sun. They usually come out in the cooler temperatures of the night. Under a darkened sky, these crabs will venture to the water’s edge, allowing the incoming waves to wash over them so that their gills can absorb the oxygen rich water. Even though most of its life is terrestrial, ghost crabs must return to the water periodically to wet their gills. If they are unable to return to the water they can wick moisture from damp sand using the fine hairs on their legs. During winter hibernation they can survive by storing oxygen in special sacs near their gills.

Ghost crabs are fast and can move along at 10 miles an hour. Their speed and coloration can make them disappear like a ghost, thus the name. Even part of its scientific name means “swift-footed.” One of its early Latin names meant “fleet-footed one of white.” This speed allows them to easily capture sea turtle hatchlings, which they pull into their burrow and feed upon during the summer and fall months. For sea turtle lovers this sounds harsh, but a female sea turtle will deposit close to 120 eggs in her nest to absorb the high mortality due to natural predation. Ghost crabs will also scavenge along the shore and feed on critters found in the surf.

A quick dip in the ocean refreshed my senses and as I walked out of the surf I stopped in the high energy area of the beach known as the swash zone. This is where the water from the incoming waves spills up onto the gentle upward slope of the shore. Here the sand is liquefied and as a child I loved to stand here while the weight of my body would cause my legs to sink deeper into the sand with each incoming wave until it appeared that my knees were my feet. This is where my sisters would collect the wet sand to make sand castles. Without the plastic sand castle molds of today, they would grab handfuls of wet sand and dribble ropy glops of the fluid sand through their fingers creating all kinds of weird- shaped “castles.”

I pulled a foot from the sand and a beige colored mole crab plopped onto the sand and it quickly reburied itself. These one-inch, oval-shaped crabs are also called sand fleas or sand crabs. Anyone, regardless of age, who has visited the beach during the summer has been captivated by the digging ability of this tiny crab. They move horizontally with the movement of the tide to stay in the swash zone where the sand is soft. If the sand is dry or hard they are unable to dig deep enough to be protected from shorebirds such as willets. Their tough heavily armored exoskeleton protects them in the rough and tumble world of the surf zone. Using five pairs of legs, they will dig backwards into the sand and extend feathery antennae that filter out plankton and decaying organic matter from the incoming or retreating waves.

On moonless summer evenings I have walked the beach specifically looking for mole crabs. How can I see them at night you might wonder? Well, when conditions are just right, bioluminescent material will adhere to their shell or antennae causing them to glow in the dark. As a wave recedes, greenish glowing oval shapes quickly disappear into the sand.

As I dug around in the sand to find a few mole crabs, I also found some small half-inch, multi colored clams called coquina clams. Beautiful color bands or rays wrap across the shell. This bivalve mollusk is also a fast digger, using its wedge shape and powerful muscular foot it can quickly vanish into the sand. Sometimes not quick enough for the migrating red knots that rely on them for fuel. When the hinged halves of a dead coquina are found open on the beach they are also referred to as the “butterfly shell.”

Like the mole crab, coquina clams are filter feeders, however instead of antennae, they use siphon tubes to extract algae and detritus from the sea water. These clams are sensitive to the low frequency vibrations created when waves spill onto the beach. This allows them to gauge the location of the breaking waves with the movement of the tide, allowing them to stay in the swash zone. When they need to move higher or lower on the beach they will pop out of the sand and use the wave to push or pull them to the desired location. This is the coquina version of body surfing.

Coquina clams have existed in large numbers for many years. Over time, so many have lived and died that huge deposits of the shells have created limestone rock deposits known as “coquina,” which is a Spanish word for rocks made from shells. An example of this can be found at Fort Fisher near Carolina Beach, where an outcrop of coquina rock is exposed along the beach. Native Americans used coquina as a source of food by boiling large quantities of the tiny clam to create a clam broth. Even today, some folks testify to the culinary attributes of the green colored broth.

All three of these animals, the ghost crab, mole crab and coquina clam, are indicator species that signal the health and diversity of the beach ecosystem. Their presence is important in a food chain that supports many other species. The mole crabs and coquina clams in particular are like chocolate chip cookies to pompano, red drum, blue crabs, moon snails and sanderlings. Without a healthy natural beach, these species would not survive to support a host of other species that rely on them to exist. These creatures are also champions of the beach environment, creating moments of wonder to anyone that has ever walked barefoot through the surf on a warm summer day. 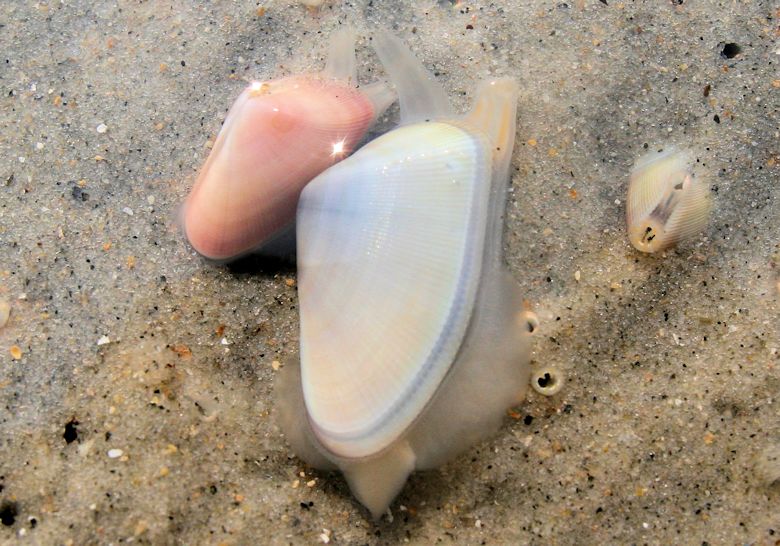 Like mole crabs, coquina clams are filter feeders, however instead of antennae, they use siphon tubes to extract algae and detritus from the sea water.