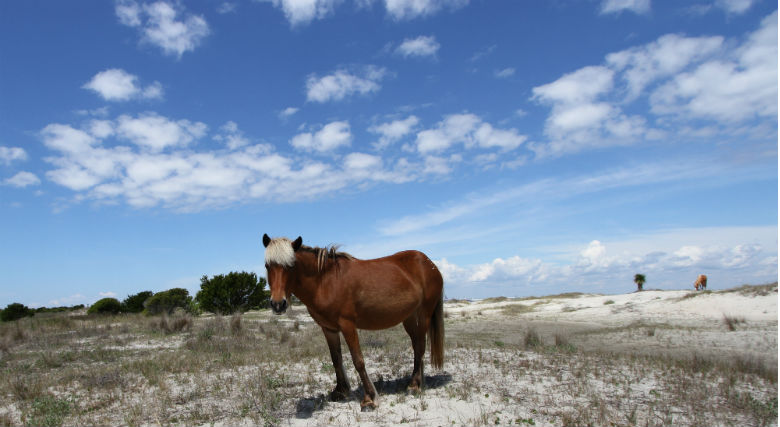 The wild horses of Shackleford Banks are thought to be descendants of Spanish mustangs that survived shipwrecks off the N.C. coast in the 1560s.

BEAUFORT — The coast of North Carolina is blessed with a number of undeveloped barrier islands where you can still step back in time and have a true rustic wilderness experience, even if only for a few hours. Accessible only by boat, these islands are destinations that require a bit of planning to enjoy their remoteness. One lies just south of Beaufort, in Carteret County, sandwiched between a couple of iconic coastal landmarks, Fort Macon and the Cape Lookout Lighthouse.

As I headed out from the Beaufort waterfront in a private water taxi — $15 roundtrip and reservations are recommended in the summer — we entered the calm waves of Beaufort Inlet on a spectacular warm day filled with endless blue skies and light wind. Even though Shackleford Banks is discretely nestled between these two natural and cultural resource heavyweights, it can more than hold its own in terms of allure. While the fort has been around since 1834 and the lighthouse since 1859, the signature feature of “Shack” has been around for over four hundred years.

The ferry captain smoothly slid the bow of the boat onto the soundside western shore of the island and I hopped off without even getting my feet wet. I was immediately greeted by a few of the famous horses that give me a casual glance and continued munching on the dune grasses. This lazy group of horses

appeared quite docile, so I moved on in hopes of finding a rowdy bunch of bachelor males challenging a stallion over a harem.

I hiked over to the beach side along the western tip of the island where it is quite evident that storm waves have grinded away a bit of the point, flattened a few small dunes and overwashed into the shrub thickets.

Suddenly, a small mammal darted about trying to seek cover among the dying wax myrtle shrubs. Then, as if playing a game of freeze, a cottontail rabbit abruptly stopped in its tracks and was as still as a stone statue. This type of rabbit can run up to 18 miles an hour, and this one predictably escaped into the brush in a blurring burst of speed.

When serious development began sprouting from the sand of the barrier islands in the 1960’s, some visionary thinkers within North Carolina state government began buying up some island property, including Shackleford Banks. Cape Lookout National Seashore was created in 1966. It included Shackleford Banks and three more islands to the north, “In order to preserve for public use and enjoyment an area in the State of North Carolina possessing outstanding natural and recreational values.”

I continued walking east down the beach for about a mile and then decided to walk through the low interior dunes. As I meandered through the dunes and pockets of shrubs, I could hear a one second long electric buzzing sound about every thirty or forty seconds. I started searching the shrubs to see if an insect was the orator when the buzzing sound ignited my memory and I knew exactly the source of sound. Nighthawks!

I looked up into the blue sky and two nighthawks were diving and swooping from great heights down through the dunes to feast on the abundant flying insects. The name nighthawk is a bit of a mystery since this bird is seen during daylight hours and is not a member of the hawk family. In flight, nighthawks are easy to identify with conspicuous white bars on long pointed wings. On the ground or in a tree, the cryptic color pattern of their feathers allows them to dissolve into their surroundings to avoid detection. The nighthawks put on quite an aerial show and one even alighted on a dead tree, then on the ground, allowing me to get a good look at this intriguing bird.

As the nighthawks moved on down the island in search of more food, I walked back over the dunes and onto the beach. The powdery white sand stretched east for another few lonely miles. Without much remaining physical evidence, it’s hard to believe that the entire island was once home to a number of substantial communities. The island is named after John Shackleford who acquired the island in the early 1700s. Over the next hundred years or so, parcels of the island were willed to children, some parcels were sold and the population on the banks began to grow through the 1800s.

Shore-based whaling was a way of life on Shackleford for a long time. The British explorer John Lawson wrote in 1709, that the land now known as Shackleford Banks “has been, since the memory of man runneth not the contrary, a whaling ground.” Also in April 9, 1857, the Beaufort Journal noted that a whale close to70 feet long produced around 50 barrels of oil was caught by Shackleford Banks whalers. The oil alone was worth $1,000. The Shackleford whalers were also known to name their catches. In 1874, a right whale put up a tremendous fight, pulling the whalers in their ship well out to sea. Named the Mayflower, the skeleton now hangs in the N.C. Museum of Natural Sciences.

The lonely beaches of Shackleford Banks stretch for about nine miles west of the shoals at Cape Lookout.

Diamond City, located on the eastern end of the island, was the hub of these whaling and fishing communities. Originally called Lookout Woods, the residents, called Ca’e Bankers, named the community Diamond City in 1885 after the diamond shape pattern that was painted on the nearby lighthouse in 1873.

A large high dune protected the “city” from strong southerly winds and stormy seas. The dune also served as a lookout post to sight migrating whales. Behind it, residents built houses, stores, and a school house. They raised goats, cows and sheep and grew gardens in the rich peat soil. At its peak, close to five hundred residents worked to make a living from the riches that they could coax from the sea.

By today’s standards, life on the barrier island was indeed harsh when pounded with frequent violent storms. In 1886, the village residents watched helplessly as the ship “Chrissie Wright” grounded just offshore on a stormy and bitterly cold night. By the next day all the crew, save the cook, were dead, mainly from the cold. A reference to the story of the ‘Chrissie Wright’ is still alive today through the descendants of Diamond City residents. When temperatures dip into the teens, they might say, “It’s as cold as the night of the Chrissie Wright.”

This tragedy encouraged the U. S. Life Saving Service to establish a station at Cape Lookout and was later represented in a mural painting decorating the wall of the post office in the town of Beaufort.

But even these hardy souls could take only so much when a series of hurricanes pounded the N.C. coast in the late 1890s. A hurricane in August of 1899, known as the Great Hurricane, delivered the knockout punch when the salty surge waters washed over the island reducing most of the structures to splinters, poisoning the wells and rendering the garden soil barren. The residents salvaged what they could and relocated to the communities of Harkers Island, Marshallberg, Salter Path and what is known as the Promise Land in Morehead City.

By 1902, Diamond City was no more and Shackleford Banks was left to the wild horses. Decedents of Spanish mustangs, these horses are thought to have first arrived in 1565 as they scrambled off of ships caught in the grip of the Graveyard of the Atlantic. North Carolina considers these horses native because of their cultural significance associated with the history of the Outer Banks. In 1998, federal legislation created the Shackleford Banks Wild Horse Protection Act to ensure that these horses will forever remain an enduring reminder of our coastal heritage.

About halfway down the island, I found a young bachelor taunting a stallion with his harem by walking way too close to the group. After being run off a few times by the stallion, the rival returned and held his ground about 40 yards away from the females. The stallion cautiously approached and they stood toe to toe and the tension was palpable. They banged their chests against each other, and the stallion attempted to bite the neck and mane of the intruder and then pop him with a right hoof to the side. The stallion repositioned with his rear to the rival then threw a double blow with his back legs into the belly of the horse creating a loud thud. Initially, the intruder stood there unfazed, but then slowly walked backward keeping a wary eye on the stallion. It then turned with head down in defeat and meandered out of sight into the interior of the island.

I cut across the island through dunes, meadows filled with wildflowers, yaupon thickets and maritime forest to reach the soundside. Out on the sound beach, I looked west and realized that while I was being mesmerized by the beauty of the island, I had walked much farther than I had realized. I hiked back to my pick up site doing double time to make sure that I wasn’t late for the last return boat trip of the day.

When I reached the freshwater seep known as the Mullet Pond, I was close to the rendezvous point so I took a quick look to see if any of the horses were taking a drink. Without a horse in sight I walked to the pickup spot where a number of sandwich terns were diving after some small surface fish just feet from the shore. As I sat watching the terns, I remembered trips here years ago, running across the dunes with a surfboard under my arm without even a backwards glance at the island as I paddled out into the waves. After today, I know that I will return many more times to Shackleford Banks while leaving my surfboard at home.