If permitted, two limestone mining operations proposed by Martin Marietta Materials, located hundreds of miles apart, would share a common impact. Each would drain up to an average of 12 million gallons a day from the Castle Hayne aquifer, and discharge nearly that amount of freshwater into brackish water creeks.

“That is the discharge of medium-sized city,” said Jean Spooner, a professor at N.C. State University’s Department of Biological and Agricultural Engineering. “That’s a lot of water.”

In fact, only three of the 20 coastal counties use more freshwater each day than what Martin Marietta will discharge at the two mines,according to figures compiled by the U.S. Geological Survey.

With the public comment period ended last month on draft permit for the proposed mine near Vanceboro in Beaufort County, the state is expected to review the comments and decide by July whether to issue a permit to allow the water to be discharged into Blount’s Creek. The popular recreational waterway supports numerous types of fish, most notably river herring, a species that has suffered severe decline.

The state issued the required certification for the federal wetlands permit on May 9, but it is under review by the U.C. Environmental Protection Agency.As of March, state review of the proposed discharge found that it complied with surface water quality standards, and would have little effect on downstream salinity or pH levels. A study by the state, however, found the chemistry of the water in the headwater swamps would change and result in different invertebrate species. Potentially, state biologists said, a stronger and more diverse population of fish and insects could develop.But Spooner said that putting such a vast volume of freshwater into brackish water is likely to alter the ecology of the stream.

“I don’t see how you can argue that is better,” she said. “Those waters are naturally acidic and the whole ecology has evolved to be acidic.”

Because of its acidity, the upper portions of Blount’s Creek, where the mine water will be discharged, is classified as “swamp waters” by the state. According to state water-quality standards, pH levels in surface waters “shall be normal for the waters in the area, which generally shall range between 6.0 and 9.0 except that swamp waters may have a pH as low as 4.3 if it is the result of natural conditions.”

Heather Deck, riverkeeper for the Pamlico-Tar River Foundation, said that the discharge would violate state law. “It’s essentially changing the nature of the creek system,” she said.

State water quality standards also require that the “biological integrity” of the creek must be maintained, according to comments submitted to the state by the Southern Environmental Law Center on behalf of the foundation. That standard, the comments said, would include the ability to support an indigenous community of organisms and to maintain the low flow characteristics of the swamp waters. 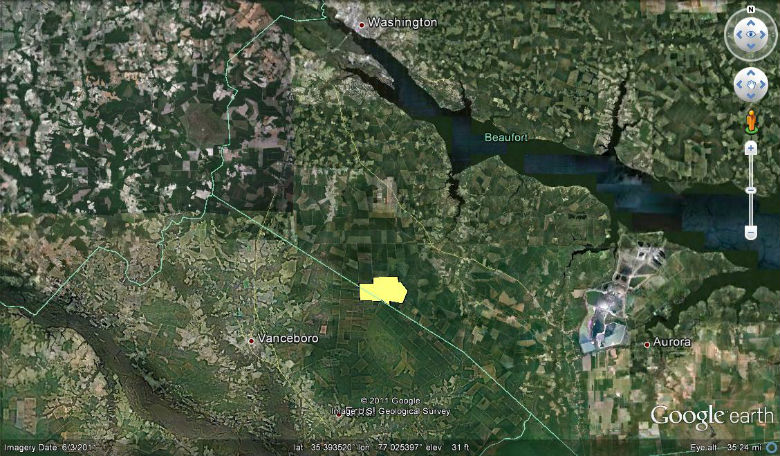 The proposed Martin Marietta quarry off Welbourne Road near Vanceboro in Beaufort County will discharge about 12 million gallons of freshwater a day into the headwaters of brackish Blount’s Creek. Map: Pamlico-Tar River Foundation

In an April 12 letter to the N.C. Division of Water Quality, the N.C. Wildlife Resources Commission also expressed concerns about the effect of more than 9 million gallons of fresh water being pumped daily into the creek.

“Discharging 9 MGD of water into the headwaters of Blounts Creek has the potential for significant adverse impacts to fish and wildlife resources and their habitat,” the letter said. “We request that alternative discharge options be considered in the project proposal that minimize the impacts to Blounts Creek.”

More river herring than expected were recently found during an electroshock survey of the creek and the Herring Run tributary, the letter said. The fish is currently being considered for listing on the federal Endangered Species List.

If the project is approved, the commission’s biologist’s suggested that more monitoring should be put in place, and that half the discharge be injected back into the aquifer.

“The applicant determined the discharge option mentioned above was a more expensive alternative than a complete surface water discharge,” the letter said. “However, costs presented in the application did not take into account the value of fish and wildlife impacts, the cost of increased monitoring not currently proposed and the cost of stream mitigation post-mine closure.”

River herring, like salmon, shad and other types of “anadromous” fish, spend most of their lives in the ocean but return to natal rivers to spawn. They depend on chemical signals in the water to spawn, said Roger Rulifson, senior scientist with the Institute for Coastal Science and Policy and professor of biology at East Carolina University.

The chemistry of the water would be altered by the discharge.

“Every watershed has a signature,” he said. “Some species, like river herring, do show an affinity for one watershed or another. They home to one watershed to reproduce.”

Eventually, if the discharge continued for a long period, the ecosystem would stabilize. But it would be totally different.

“I imagine if river herring are using that as a prime spawning habitat,” he said, “that would no longer be possible.”

At the proposed Maple Hill site in Onslow County, despite stiff public resistance, on March 26 the county Board of Adjustment voted to approve a special use permit for the 1,800-acre quarry. The permit is expected to be finalized at the end of the month. At that point, opponents plan to appeal.

“Absolutely, we will be challenging the decision,” said Robbie Yopp, a resident who lives near the proposed Maple Hill mine.  “We feel like the board erred on some of the issues that came up in the hearing.”

Martin Marietta, which operates mines all over North Carolina, has not yet applied for state permits for the Maple Hill project.

Dale Weston, president of White Oak-New Riverkeeper Alliance, said that the proposed mine was rejected in 2010 by the board, but after nearly six days of hearings, nearly the same application was approved 4-1 by the board.

The community is not only concerned about the effects of the discharge on the streams and wetlands, but also on increased truck traffic on narrow roads, drawdown of water in two major well fields, the development of sinkholes in the “cone of depression,” and nearby hog lagoons being undermined and spilled into the aquifer.

“It’s a disaster just waiting to happen,” he said.

Janine Dunn, at attorney who lives across the street from the proposed mine site, said that if problems did develop with the mine, it would be up to the affected property owner to prove that the mine caused it, a costly and time-consuming process.

“There’s nothing good that will come out of the quarry for local people,” she said.

Despite the volume of water that would be withdrawn from the Castle Hayne aquifer on a daily basis for up to 50 years – the life of limestone mines – there is no state requirement to recycle the water, or mitigate the loss of freshwater from the aquifer that provides drinking water for much of the Eastern part of the state.

In addition to a discharge permit and a wetlands permit, Martin Marietta would also be required to obtain a capacity-use permit from the state Division of Water Resources, said Nat Wilson, supervisor of groundwater management branch. A draft permit issued this week is currently undergoing an 18 days of public review.

Wilson said that the permit is required for withdrawals of 100,000 gallons a day or more only in a 15-county area in the central coastal plain. The 2002 state law was spurred, he said, by signs of overuse of aquifers under the 15 counties.

If problems do develop during the life of a project, Wilson said, the capacity-use permit can be reviewed. Typically, he said, the remedy would be limitations on the depth or amount of the withdrawal or some other operational constraint.

Wilson said that North Carolina is not very vulnerable to earthquakes, but sinkholes are not uncommon in the cones of depression created by the drawdown of water, although they’re small and nothing like the house-swallowing sinkholes in Florida.

Neighbors around some mines have also reported issues with their wells and ponds.

Only Alabama and North Carolina have no statewide regulation on large withdrawals from groundwater or surface water, said Bill Holman, director of The Conservation Fund.

A 2010 water allocation report Holman co-authored while working at Duke University’s Nicholas Institute for Environmental Policy Solutions recommended that the state join the other 48 states in regulating large water withdrawals. But no action was taken.

“The more time that passes with North Carolina’s current, largely unregulated major water withdrawals,” the report said, “the more withdrawers there will be and the higher the amount that existing withdrawers will expect to have ‘protected’ when the state decides it needs to regulate for carefully.

“This ever ratcheting-up in demand expectations will make meaningful regulation harder with each passing year.”

Although the Castle Hayne aquifer is fortunately very productive and recharges rapidly, Holman said, it does not preclude future issues, especially considering population increases, climate change impacts – -including droughts -and the possibility of high-water use gas “fracking” industries in the state.

Holman, who had formally served as secretary of the Department of Environment and Natural Resources and as the executive director of the N.C. Clean Water Management Trust Fund, said that in light of increased pressure on water supplies, the state needs to use water more efficiently and create proactive policies to better manage its water resources.

One logical place to start would be requiring sensible reuse of the water that is pumped out of the aquifer by mine operations, he said, ideally using it for nearby industries or municipal water systems.

Instead of discharging the groundwater, Martin Marietta could also create lakes and mine the limestone with floating dredges in a process called “wet mining.” Though more expensive then dry mining, such mines are used in Florida and elsewhere

Wasting 12 million gallons of water a day makes no sense, Holman said. “The irony is,” he said, “that in some parts of the state, we’re running out of freshwater.”