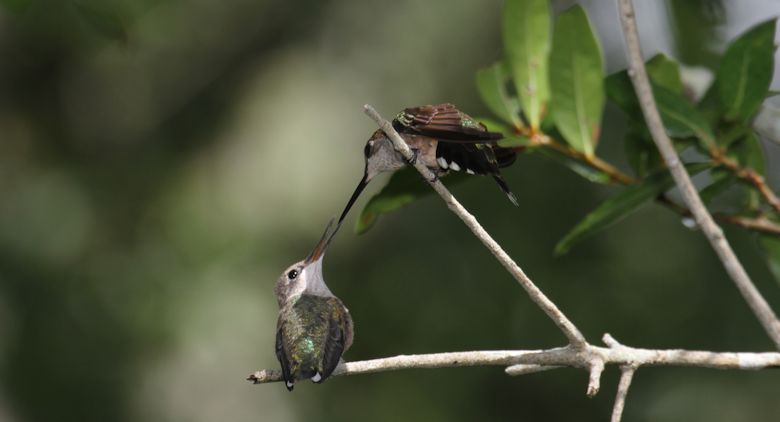 One of the fledgling chicks grabs a quick meal from its mother.

EMERALD ISLE– Even though the temperatures are still toasty, summer is waning and the signs are everywhere. The muscadine grapes are fat and heavy on the vine, the goldenrod is starting to bloom and of course, the yellow cloudless sulfur butterflies are everywhere to usher in a new fall.

As my wife and I walked the beach and waited for the blazing orange ball to extinguish into the horizon, I began to reminisce about the fleeting summer and where all the time went. One event that dominated a good amount of my time stood out in my mind. A hummingbird, actually three hummingbirds took over my life.

One evening in June, my wife and I were standing on the back deck of our house waiting to catch sight of a gray fox that had been passing through our woods.  Suddenly, a female ruby-throated hummingbird appeared and buzzed away. It reappeared numerous times when my wife noticed that it kept landing at the same spot on the same branch of a live oak tree about 25 feet from the porch. We forgot about the fox and watched the hummingbird as it continued to return to the tree.

My wife retrieved some binoculars and when the hummingbird landed again on the branch, she exclaimed, “She’s building a nest!”

With these words, we began a surveillance operation that would rival any undercover police investigation. Spotting scopes and binoculars were placed at strategic locations throughout the house and window screens and a section of porch railing was removed to allow for clandestine photography.

We watched with amazement as the hummingbird built the nest over the next two days. The tiny cup shaped nest, no bigger than a walnut, was constructed primarily with thick layers of lint that she recovered near the dryer vent. After a foundation layer was placed on the branch, it was anchored in place with multiple wrappings of pilfered spider webbing. As the walls of the nest went up, they too, were secured with ropes of spider webs.

Once the nest was complete, the outside was decorated mainly with bits of lichen, which provided excellent camouflage and a bit of water proofing. The female would then hop on the nest and snuggle in. At times you could see her kicking the outer walls with her legs to expand the diameter of the nest.

Over the next few days she would fly in and sit on the nest, but when she left I could see that the nest was void of eggs. When she wasn’t leaving the nest as frequently, I realized that eggs were in the basket, two peanut M&M sized eggs to be exact.

Over the next 18 days, this delicate little bird endured sweltering heat, torrential rain from thunderstorms and wind that had the nest bobbing up and down like a rowboat in the ocean during a hurricane. I fully expected to find the nest abandoned after a few of these thunderstorms, the eggs thrown out as if with a slingshot.

Then one day, she landed on the nest and didn’t settle in, she stood on the edge of the nest and looked down into it. One of the eggs had hatched and a bald, dark gray little head with closed, bulging eyes rose upward with its mouth wide open. Mom’s long slender bill reached into the mouth of the chick and the chick thrusted itself so vigorously onto the needle-like bill that I thought it might skewer itself.

A couple of days later the second egg hatched and the adult now had two to feed. Even though I knew that there were only two eggs, I could still see another egg in the nest. This turned out to be half of a shell from one of the eggs. The shell must have irritated the chicks since I could see them trying to push it over the rim of the nest. After a few days, they grew stronger and were able to actually flip the shell into the air a bit. It looked like they were playing volleyball until one of the chicks successfully flung the shell out of the nest.

For the next three weeks, the adult female returned to the nest about every 25 minutes from sunrise to sunset, feeding the chicks a slurry of nectar, sap and tiny insects. As the chicks grew, their naked skin slowly began to show the stubble of feathers poking out.

The female tirelessly continued the feeding and drove off of any intruders that might threaten her chicks. She was on her own as the breeding male was nowhere to be seen and offered no help in nest building or feeding. The male did, however, offer her a free pass if she entered into his feeding territory. Otherwise the male will run off any other male or female hummingbird.

Throughout the nest building and feeding, I was busy trying to document the event with photographs. I must say it was the most challenging animal that I have photographed. The nest was in deep foliage and heavily shaded. Hummingbirds move fast, and achieving the proper position to angle my camera lens at the nest required that I contort my body using the dexterity of a yoga master. Initially my presence out on the porch gave her a bit of concern, but she soon viewed me like a branch on a tree.

The shimmering iridescent green on the back and head of the female mesmerized me and I was obsessed with getting the perfect picture with just the right light. Most of the time, when the female landed on a nearby branch, she would face directly towards me. This limited my chances to get a picture of her from behind. Then, one day, she landed nearby with her back to me as she kept a wary eye on a Carolina wren. I fired off so many photos that the shutter sounded like an old-fashioned teletype. I felt like a fashion photographer shooting away as she preened and posed.

I smugly went to view my award-winning photos, popped open the compartment to remove the memory card and stood in stunned, numb silence as I discovered that the card was missing. I went through all the seven stages of grief on this one, lingering on anger for quite a while, angry at myself for being such a bonehead.  Acceptance kicked in and about a week later she gave me another opportunity.

As the chicks grew bigger, their plumage of over 900 feathers slowly filled in and they looked just like the female parent. If either of the chicks were male, it would take a while for the namesake throat patch to turn red.

Eventually, the older chick began to stand on the edge of the nest to test out its specially adapted feathers and wings that allow it to fly forward, backward, up, down and hover. At times it would hover slightly above the nest and return with a clumsy landing. Beating their wings at over 60 times a second, these little jets can easily fly over 25 miles an hour.

One day, I looked out the spotting scope and there was only one chick in the nest. Scanning the nearby tree branches, I found the chick hunkered down on a branch. It had successfully fledged. A few days later, the second chick was conducting preflight tests also.

I thought I was going to lose this baby when a large green anole slowly crept down the branch towards the nest looking for a meal. The baby chick hunkered down low in the nest, its bill and eyes poking over the rim. Oh no, I thought, but this is the law of nature, this is what happens on the wild side. But then the chick hopped up, puffed out its feathers and frantically buzzed its wings causing the anole to abort its attack.

I have never had children, but I did get to literally experience the empty nest syndrome when a check through the scope revealed a lonely nest. Both chicks were now on the branches, flying short distances and still being fed by the female. They stayed in the same area for another 10 days and were eventually nowhere to be seen near the nest area.

The flowering plants around my house continued to have regular hummingbird visitors as they fatten up for migration and I assumed that some of these birds are “my” hummers. Soon they will be making the long trek to Mexico and Central America where along the way they will fly 500 miles non-stop over the Gulf of Mexico. This is such an unbelievable task that it was once believed that hummingbirds hitched a ride on the backs of larger birds for the flight across the Gulf.

When the light hits the back of a hummingbird just right, it is understandable why some Native Americans referred to the hummingbird as a living sunbeam. An Indian legend tells the story about a group of sunbeams that wanted to live on Earth and be like the other living creatures. So, since they were children of the sun, to make them happy, the sun turned them into hummingbirds.

The shimmering of the moon reminded me of the hummers and created plenty of light to find our way off the beach and back through the dunes. I noticed that I was walking alone and that my wife had stopped on the dune ridge and was looking back at the orange moon casting a glow over the ocean. She was absorbing one last delicious moment of our summer with the hummingbirds.