NAVASSA  — You can still see wild rice, the remnants of long gone plantations, around the marsh lands where the Brunswick River and Sturgeon Creek meet up and flow into the Cape Fear in Brunswick County.

What’s not as easy to see is the extensive amount of toxic residue buried in and around the area, which contained a large plant that treated wood with creosote for nearly 40 years and is now a federal Superfund site.

More than three decades after the plant closed and after lengthy legal battles, federal and state agencies are now studying remediation options and public health impacts at the site. As a result of a court award for damages to natural resources that are the first payments of their kind for North Carolina, they are also searching for places to restore wetlands.

Kerr-McGee Chemical Corporation’s creosote plant originally opened in Navassa in 1936, when it was owned by the Gulf States Creosoting Company.  Kerr-McGee bought the operation in 1965.

Since then, the 292-acre site has been unused. It was studied a handful of times for two decades, but only got its first extensive look in 2005 after a broad enforcement agreement between the U.S. Environmental Protection Agency and Kerr-McGee. The results, which indicated extensive creosote contamination, prompted a call for further studies including how best to clean up the site and its environmental and human health effects. The company closed the plant in 1974, leaving behind years of creosote sludge, including storage tanks and two large unlined wastewater lagoons on roughly 100-acres near Sturgeon Creek where most of its operations took place. The plant was dismantled six years later and the lagoons drained and replaced with creosote mixed with soil.

In 2006, Kerr-McGee formed and spun off a new company, Tronox, which took over ownership of the plant and several similar sites owned by the company around the country. Tronox filed for bankruptcy three years later, claiming it had been unknowingly saddled with Kerr-McGee’s inventory of environmental cleanup obligations.

Kerr-McGee, meanwhile, was bought by Anadarko Petroleum Corporation, the country’s second largest independent oil and gas company. Tronox and its shareholders eventually sued Anadarko over the deal in federal bankruptcy court saying it could not meet its cleanup obligations.

With Tronox unable to complete work in Navassa, the EPA took over management of the site studies, and in August 2009 the U.S. Department of Justice filed a claim on behalf of the EPA in Tronox’s suit against Anadarko.

Creosote is the black goo that railroad ties are treated with. You may have noticed the same stuff on the bottom of utility poles, and in fact it is one of the most common wood preservatives used in the United States.

Creosote is made from a wide range of chemicals and is divided into two types. The first  is wood creosote which is not widely used in the United States. The more common type of creosote is created when coal is heated to produce coke, a cleaner burning form of coal, or natural gas. This process produces coal tar creosote, coal tar and coal tar pitch, which are all mixtures of similar compounds that are commonly referred to as creosote.

Because creosote is a general name for a mixture of different chemicals and limited research on health effects has been completed, it is difficult to quantify the risks. Creosote has been classified by the EPA as a probable carcinogen. Studies have shown increased risk of cancer and respiratory problems in plant workers repeatedly exposed to creosote. Exposure to creosote on the skin has been shown to cause rash and irritation and in an extreme case, cancer. Direct skin contact with creosote poses the most likely health risks to people outside industrial applications. Little is known, though, about creosote’s effects on the environment.

The Navassa site was officially added to the EPA’s list of Superfund sites in early 2010. In November of that year, the agency and the Justice Department announced it had reached an agreement with Tronox and the bankruptcy court that would allow the company to shed its Kerr-McGee hazardous waste sites and emerge from bankruptcy in exchange for 88 percent of the proceeds of the ongoing lawsuit against Anadarko and a $270 million payment.

The agreement, which splits the award between dozens of sites nationwide, includes $4,208,555 for studies and cleanup at Navassa and $917,732 to remedy damages to natural resources in the area. It also sets up a formula should the government win the suit and any of the $25 billion it is seeking in damages and compensation. Under the formula 2 percent of funds awarded would go toward the cleanup at the Navassa site and 0.5 percent for additional restoration work.

The trial in the case continues in federal bankruptcy court in Manhattan. 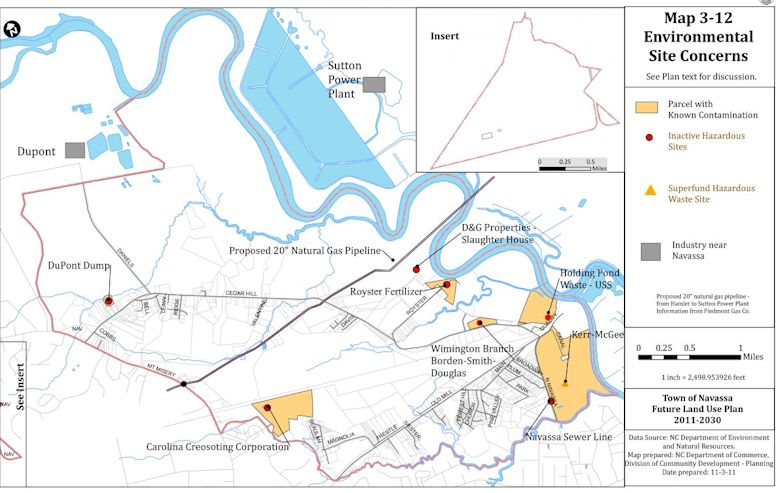 The map from the Navassa land-use plan shows the old Kerr-McGree creosote site and areas of environmental concern in the town.

While the trial unfolds, work continues on assessing the extent of the contamination and studying what to do with the site. In May, the N.C. Division of Public Health released an assessment of the site. It found that the creosote contamination does not present a threat via contact or public drinking water. The report notes that all of the homes in the area are now on Navassa’s municipal water system and that the site is gated and posted with no trespassing signs.

But the report says that further studies are needed to determine if fish and shellfish in nearby waters are contaminated and if people who lived near the plant when it was in operation were harmed by exposure to the chemicals.

Sandy Mort, a health assessor with the division, said the concern is the extent of the contamination. “This particular type of contamination gets into the sediments,” she said.

There has been documentation at the site, she said, of contamination right up to the water. Fish and shellfish could have been contaminated by direct contact with the toxins, she said.

Mort said as long as the site remains undisturbed and off limits the biggest chance of human exposure to the contaminants is through fish and shellfish.

A new round of fish and shellfish samples taken over January and February should give researchers a better idea of the extent of contamination in the area. Once the study is complete, Mort said the division will then make recommendations the state Department of Environment and Natural Resources and the EPA.

One group anticipating the new fish and shellfish study is looking how best to deal with damage to the ecosystems in the area.

“We are very early on in this process,” said Scott Pohlman, director of Conservation Incentives for the N.C. Natural Heritage Program, an agency in the state Department of Environment and Natural Resources.

Pohlman is part of a group that includes representatives of the EPA, NOAA and the U.S. Fish and Wildlife Service. Set up under the legal settlement, the group is trying to places to remediate contamination of about 70 acres of tidal freshwater marshes and other natural resources in the area. Options, Pohlman said, could include restoration work at the site or somewhere else nearby.

Once a set of options is developed, the group will present its report and hold public meetings ns on the options. The focus will be on what can be accomplished with the funds already in hand, Pohlman said, but there’s likely to be a prioritized list in case more money becomes available from to the lawsuit.

One worry is that restoring marshes at the site will only disturb contaminated soil and do more harm than good. But Polman said trying to stay close to the area will be a goal. Proximity, he said, will be an important criterion.

“I think it would behoove us to look at proximity,” he said. “You want the remedy as close to the injury as possible.”

Along with the additional health studies and search for options in wetlands restoration, the EPA continues to forge ahead with a study of remediation options at the site.

In an email response to Coastal Review Online, EPA officials said a feasibility study is likely to be completed over the next year and a preferred alternative presented to the community for review in late 2013 or early 2014. Once the remedy is selected, design of the remediation will take about one year a year to complete.

Agency officials said they plan to fund the project through either Superfund money or a portion of the settlement in the ongoing litigation.

Navassa Mayor Eulis Willis said he’d eventually like to see at least the portion of the site that is not likely contaminated reclaimed and returned to use. In community meetings he’s been pushing for further assessments on the impact of the plant on longtime residents’ health and for help building a community center and a park in the area. He’d also like to see some of the former rice growing lands in the area conserved for their historical value.

The Kerr-McGee site is just one of a handful of brownfields in Navassa, which has a long history as an industrial and manufacturing center. But Willis said the loss of prime land along the river to contamination has dealt the town a harsh blow.

“If we could get 10 to 15 acres of that land for a park, that would enhance the town,” he said. “The kids here don’t really have a place for recreation.”

Whether the initial round of funds from the settlement is it or a larger payout is coming from the court, Navassa, he said, just wants its fair share of any deal.

“We’ve been behind the eight ball on this a long time,” he said.