SWANSBORO — No matter what, it’s sometimes hard to find an activity that everyone will enjoy even in a beautiful coastal community such as this one. That’s just one of the many reasons to cruise the marshes of the White Oak River this summer with the N.C. Coastal Federation and Hammocks Beach State Park.

Each cruise is different because you never know what you’ll see on any given day, and they’re perfect for vacationers and locals.

Sam Bland narrates the cruises. He’s a retired state park ranger and park superintendent, who spent most of his 30 years with the park division at Hammocks Beach. His specialties were resource management and environmental education. Needless to say, he knows these marshes like the back of his hand. He provides a history of the Swansboro area and barrier islands, he discusses the landscape and ways to preserve it and can identify almost any species of local wildlife and vegetation.

Karen and Tom Naftzger moved to Emerald Isle three years ago from Ohio where they lived on Lake Erie. They’re retired and now spend most of their time volunteering for various organizations such as the N.C. Aquarium at Pine Knoll Shores and the N.C. Maritime Museum in Beaufort. They recently attended one of the cruises and said they’d definitely be back.

“I really enjoyed it,” said Karen. “It’s nice to get the background (of the area). I’d do it again.”

Tom also found the cruise informative and appreciated the perspective of the ferry, where you are able to get a different view of the islands.

The cruises begin at 11 a.m. from the state park in Swansboro, but try to get there 15 minutes early. The covered ferry winds its way through the estuaries in and around the White Oak River and Bogue Sound, where Bland begins by discussing issues that affect the local water quality, such as stormwater runoff, fertilizer use, roads, parking lots and manmade bulkheads.

He also uses the opportunity to discuss what can be done to help. “There is good news,” he said. “There are things you can do.”

One of the stops along the cruise is the site of a joint venture between the park and the federation, in which 40 percent of the impervious surfaces were removed and replaced with “rain gardens,” resulting in a large decrease in stormwater runoff from one of the park’s parking areas.

The cruise continues with a history lesson about the Native Americans who first lived along the river and left remnants of their pottery along its shores.

“The first person to actually own the land here was Tobias Knight, who was friends with Blackbeard the Pirate,” Bland adds. “Tobias worked for the government and was also the harbor master in Bath.”

The discussion goes on to include subsequent owners and uses of the islands such as a whale processing area and a Confederate fort during the Civil War and submarine lookouts during both World Wars.

“Bear Island and all the islands are constantly changing and moving. There are sand dunes as tall as 60 feet that show dynamic movement due to storm affects,” Bland said. “Every plant and animal here has adapted to the salt and salt spray, wind and temperatures.”

He also talk about  many of the various animals, birds and insects you may see along the islands, such as the rare butterfly the Crystal Skipper, which can only be found in two locations in the world—Bear Island, which is part of the state park, and Bogue Banks. Also, the beautiful painted bunting makes its home in the area and can be seen during a particularly fortuitous trip.

A final stop is Huggins Island, which is now part of part of Hammocks Beach. The island was farmed in the 1930s, Bland explains, because of its frost-free winters. It’s now a maritime preserve that attracts ospreys and bald eagles among many other creatures. There is also the site of an earthen Civil War fort—Fort Huggins—that Confederates built on the island to defend Bogue Inlet Swansboro.

The marsh cruise program runs every two weeks— the next one is June 15. The cost is $5 a person for the ferry. Though all ages are welcome, the program is geared towards older children and adults. Space is limited and the cruises tend to fill early, so make sure and register as soon as possible. Additional cruise dates are June 29 (already full); July 13 and 27 and August 10.

Visit the federation’s Events Calendar to sign up or call 252-393-8185 for more information. 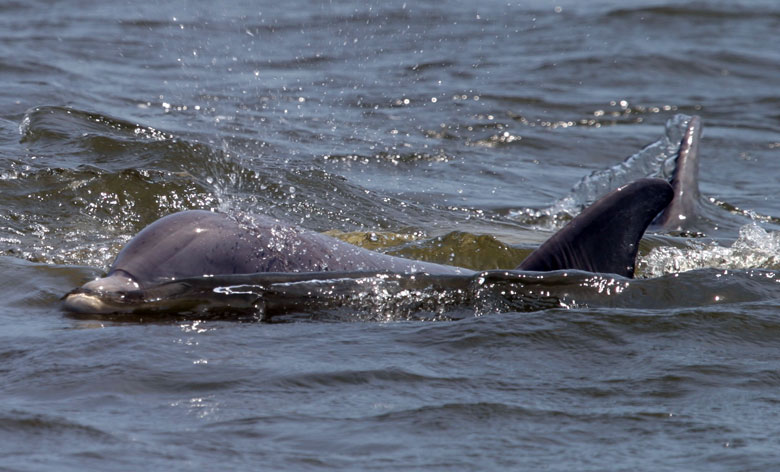 Bottlenose dolphin are not uncommon visitors to the marshes of the White Oak River. Photo: Sam Bland

Annita Best has a BS in journalism from Culver-Stockton College in Canton, MO, and a MBA from Boston University. She has lived in coastal North Carolina since being stationed here in 1987. She is currently a colonel in the Marine Corps Reserve.