Reprinted from the Tideland News

SWANSBORO — The Navy on June 12 in Swansboro will hold one of five public meetings on its draft environmental impact statement for continued sonar and explosives training and testing in 2.6 million square miles of the Gulf of Mexico and off the East Coast, including North Carolina.

The meeting will be from 4-8 p.m. in the Hampton Inn and Suites at 215 Old Hammock Rd. The Navy will provide information about the plans that will begin in 2014 and extend for five years and will accept public comments.

Although a public comment period on the same issue drew extensive comments and some harsh criticism about five years ago before the currently-approved series of training and testing exercises began, there has been little buzz about the EIS and the meeting this time around.

Much of the focus in the past has been on sonar’s potential health effects on marine mammals, including whales and dolphins, but the scientists now appear resigned to the Navy’s activities in area waters.

“The Navy has been doing this in waters all around the continental U.S. and Hawaii for a few years now,” said Dr. Vicky Thayer, a marine mammal network coordinator for the central area of the N.C. coast and a marine biologist at the N.C. Center for Marine Science and Technology in Morehead City. “I am pretty sure this will continue because it is so widespread, and well, it’s the Navy.”

Thayer said the scientists still takes seriously the threat that sonar poses to marine mammals, but noted that it’s difficult to pin specific problems to the testing.

“I think people are resigned to it,” she said. “It is very difficult to determine if animals have been injured or damaged by sonar, and not everyone has the equipment to analyze gases in the organs and bloodstream that can result from acoustic trauma.”

Thayer said Drs. Andy Read at the Duke University Marine Laboratory in Beaufort and Ann Pabst at the University of North Carolina-Wilmington are marine biologists who have done extensive research on marine mammals. They do some survey work offshore for the Navy.

Read said that one reason the public meeting has not generated much buzz is that the Navy isn’t planning to do anything different this time than it has in the past. 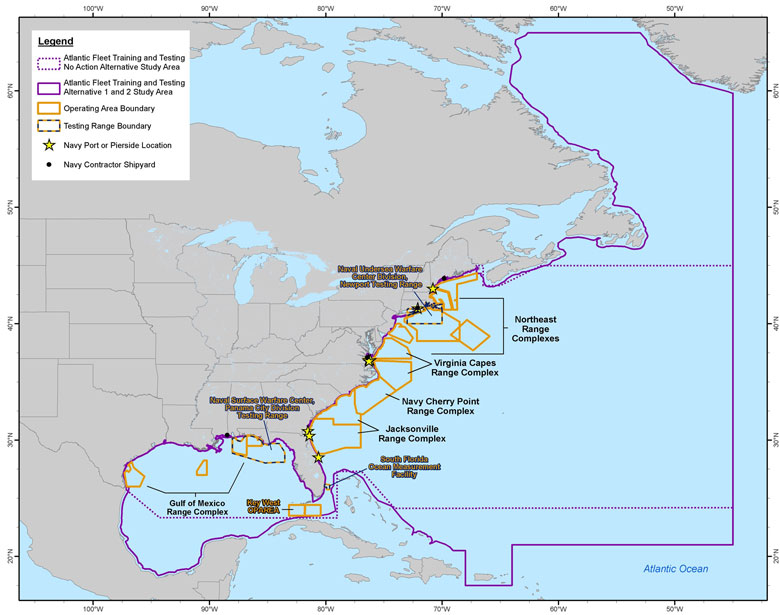 Public meetings on the subject in the past have also drawn strong interest from the N.C. Division of Marine Fisheries, and the agency does plan to make comments this time, according to Ann Deaton, chief of the division’s habitat protection section. However, Deaton said those comments are not ready yet and might not be delivered during the meeting. More likely, she said last week, the agency will submit its comments in writing. The Navy will continue to accept written comments on the draft impact statement through July 10.

For more specific information on the environmental study and on how to make comments, go to the Navy Web site.

In its press release in advance of the hearing, the Navy said it proposes to continue to conduct training and testing that might use active sonar and explosives, “primarily within existing range complexes.” However the proposed action also might include sonar maintenance and gunnery exercises concurrent with vessel transits “outside range complexes and testing ranges.”

The Navy Cherry Point Range Complex, off the coast of North Carolina, encompasses the sea space from the shoreline to 120 nautical miles seaward. It also includes special-use airspace with associated warning areas and surface and subsurface sea space.

The latter, the “preferred alternative,” includes the authority to test futuristic weapons such as surface ships outfitted with “kinetic energy weapons,” based on magnetic accelerators.

Specifically, the Navy is seeking a five-year reauthorization of a permit from the National Marine Fisheries Service, granting an exemption from the Marine Mammal Protection Act of 1972.

The first of the five public meetings was May 30 in Providence, R.I.

According to a report in the Cape Cod Times newspaper, Navy researchers indicated that in preparing the EIS, they used a new computer model that predicted an increase in the number of opportunities for whales, seals and dolphins to be harassed or harmed during Navy training, from 1.9 million potential impact events a year under the old permit to 2.1 million per year.

Testing of new ships and equipment could add another 1.8 million impact events.

The newspaper report stated that Charles Mayo, director of right whale habitat studies at the Center for Coastal Studies in Provincetown, Maine, “was … appreciative of the attitude and depth of knowledge of the experts the Navy had assembled to research marine mammals and mitigate potential damage from sonar and explosives.”

Still, the newspaper reported that Mayo and another researcher commented that there are gaps in the Navy’s information, and said environmental organizations “would like to see more emphasis on closing certain known gathering spots for testing at the times of year species are present in numbers.”

The Navy has said it is impractical to close areas with dozens of varying species congregating at different spots in the ocean.

The Navy also has said that the strength of the sonar signal is reduced the closer species get to the vessel and is shut down altogether for at least a half-hour, or until they leave the area, if they get within a few hundred yards. Passive acoustic devices also listen for the sounds of marine mammals underwater and aircraft fly over the area before training or testing begins.

This story is provided courtesy of the Tideland News, a weekly newspaper in Swansboro. Coastal Review Online is partnering withthe Tideland News to provide readers with more stories of coastal interest.