MAYSVILLE — The sun is low, creating long shadows of the tall mature pine trees as I drive along a wide, dusty, gravel road known simply as FS 1105. The road started out paved off N.C. 58 just south of this small town in Jones County and was announced only by a small green street sign that read “Catfish Lake Road.”

This 962-acre lake is a small part of the 16,000-acre Croatan National Forest that stretches into parts of Craven, Jones and Carteret counties.  A kettle of turkey vultures swirled high in the sky, gliding in lazy circles over my destination, Catfish Lake.

As I make my way down the road, I meet several vehicles that are traveling much too fast on the loose gravel road bed. As they passed, a thick rooster tail plume of white dust creates an artificial fog that obstructs my visibility for a few seconds. The first section of gravel road is bordered by stands of fire-resistant longleaf pine trees. The trees were once an important source of turpentine, tar, rosin and pitch  and heartwood lumber for building boats and houses.

The ground underneath these trees is scorched black from a recent “controlled burn” of the brushy undergrowth and leaves, pines needles and branches on the ground. The U.S. Forest Service, which manages the Croatan, uses these burns as part of its efforts to restore the longleaf ecosystem. The fires mimic the natural forest fires that lightning ignited for centuries. They prevent the accumulation of thick layers of leaves and branches on the ground that could lead to devastating forest fires.

A low-intensity “controlled” fire is also so vital to the survival of the longleaf pine ecosystem that forest rangers set them about every three years. Burning off the ground cover allows the pine seeds to reach the sandy soil, absorb nutrients and establish a tap root. The fires also open up the forest floor and eliminate competing vegetation that would otherwise shade out the young pine trees.

This is perfect habitat for the endangered red-cockaded woodpecker that has taken up residence in the forest. This is the only woodpecker that chisels out a nesting cavity in a live tree, patiently drilling away for up to two years to complete the cavity. Since the tree is still alive, sticky sap oozes from the wounded tree creating a protective barrier that discourages predators such as black snakes from entering the nest. In 2011, forest rangers catalogued 68 nesting pairs of these rare birds. They also discovered that the woodpeckers have their work cut out for them to establish new nesting cavities, since 38 cavity trees were brought down last year during Hurricane Irene. 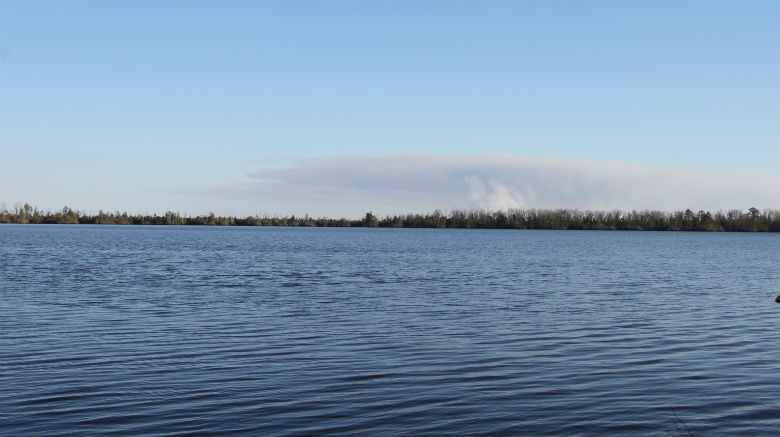 The smoke from controlled burn curls above the shore of Catfish Lake. Photo: Sam Bland

From the road there is no indication that a fairly large lake lies just a few hundred yards to the north.  The tall pines no longer dominate, but the pocosin shrubs are so dense that they obscure any glimpse of the water. To actually find the lake, I turn onto a dirt road identified only with a thin fiberglass post marked “NC4.”  Thin chocolaty dust clouds billow up behind my truck as I slowly bump along wondering if this is the road to the lake.  A parade of butterflies escorts me along the open road corridor; cloudless sulfurs, palamedes swallowtails and eastern tiger swallowtail butterflies are busy looking for nectar-producing flowers or scouting out a safe place to hunker down for the night.

I finally come across a small opening in the vegetation and see the lake. It’s much bigger than expected. This access spot is already occupied by a vehicle and a family tending to their fishing poles. As I continue down the road I notice a short path that opens up with a larger view of the lake and room for more than a few vehicles to park. A group of young men are tentatively minding their fishing poles and seem more interested in why I am intruding on their hangout. I get out of my truck and put them at ease with small talk about the beautiful evening and the obligatory “catching anything” question. They quickly ignore me as I gaze out upon the calm smooth surface of the lake.

Tiny ripples well up on the shore and reveal water that is the color of strong tea. The water has been darkened with suspended decaying peat particles, called tannins, stirred up from the organic bottom of the lake. Very little aquatic vegetation and plankton can survive in this lake since sunlight can’t penetrate the brown water. However, some plankton does exist; two new species of single-celled plankton from Catfish Lake were recently described by researchers. It is thought that these two new species may have adapted to the dark acidic water that prevents other algae from growing.

Catfish Lake is one of over 500,000 elliptical-shaped lakes that pepper the East Coast from Florida to New Jersey and possess unique characteristics to be classified as Carolina bay lakes. The formation of these lakes has ignited passionate debate among geologists, scientists and biologists. Theories range from up- welling of artesian springs, peat burning by Native Americans, dams created by giant beavers and dust devils.  Some contend that when the coastal plain was once covered by the ocean, these depressions were scoured out by submarine currents or thousands of spawning fish. Spurred by an aerial photo in 1933, one popular theory was that the lakes were created by comet fragments that slammed into the Earth. Here’s the fanciful account of this cosmic event that appeared in Harper’s Weekly that year:

The comet plunged down with a hiss that shook the mountains, with a crackle that opened the sky. Beneath the down plunging piston of star, compressed air gathered. Its might equaled and then exceeded that of the great star itself. It burst the comet nucleus. It pushed outward a scorching wind that must have shoved the waters upon the European shores, and on land leveled three hundred foot pines, spreading them radially outward like matches in a box. The comet struck, sending debris skyward, curtaining the east, darkening the west. Writhing clouds of steam swirled with writhing clouds of earth. For ten minutes there was a continuous bombardment, and the earth heaved and shook. For 500 miles around the focal spot of 190,000 square miles, the furnace snuffed out every form of life.

It is not really known how these lakes formed, but out of the 19 theories, I like the one involving giant beavers the best.

Further down the dirt road I find a third access spot, it too already has occupants. Three friendly young Marines are earnestly trying to catch fish and report that they have indeed pulled in some very small catfish and bullheads that they released. The chemistry of this lake does not allow for a diversity of fish, other than catfish, a few yellow perch and bluegill. This is not a fisherman’s paradise, thus, Catfish Lake does not attract a crowd. People may also avoid the lake because it is reported to be a relocation site for delinquent alligators.

The entire area around Catfish is a natural delight, and the longleaf pines and woodpeckers are just a start. Insectivorous plants such as Venus fly traps, sundews and pitcher plants share the ground with three different species of rattle snakes. Black bear, mink and raccoons roam about while prothonotary warblers, wild turkey, indigo buntings and Swainson’s warblers are sought after by avid bird watchers.

This remote isolated boggy wilderness may seem devoid of life at first, but spend a little time here and you’ll find yourself wanting to go back.