MOREHEAD CITY – This port town in Carteret County is uniquely situated to take advantage of any green-energy boom off the N.C. coast, an officer with the N.C. State Ports Authority noted last week at a public forum to promote offshore wind energy in North Carolina.

The town and its state port are in the middle of areas off the coast that are considered to be prime for wind energy, and those off  Virginia are just a short steam away, noted Glenn Carlson,  the chief commercial officer for the ports authority. The Morehead City port, he said, has deep water, easy access to the ocean and plenty of land on Radio Island where the various components for the wind farms could be collected, assembled and shipped to the sites.

“We’re sitting right in the middle of 80 percent of the best sites off our coast,” Carlson said. “We are ideally situated to take advantage of this opportunity.”

Nearly 200 people packed Joslyn Hall at Carteret Community College on Feb. 7 to listen to Carlson and the other panelists at the forum, one of three public meetings to promote offshore wind that the N.C. Chapter of the Sierra Club has sponsored in the state. Carteret County Crossroads, a local environmental group, was one of the co-sponsors of the Morehead City meeting. Helping sponsor the forum seemed like a perfect fit for the group, said Mark Hooper, its president.

“I believe in this issue from a broad environment perspective,” he said. “It will reduce CO2 emissions and emissions of air pollutants. Our goal is to ensure that this be done in the best way possible way.”

The forum focused only on offshore wind’s purported benefits. So there was a lot of talk about studies that estimate the wind off the N.C. coast to be the best in the country for energy production. PowerPoint slides highlighted wind’s environmental benefits, costs and power-generating potential. You can view all the presentations here. The N.C. Coastal Federation’s 2011 State of the Coast Report contains a comprehensive look at wind energy in North Carolina.

Until last week, though, the PowerPoints have largely ignored the benefits wind farms off the coast could bring to Morehead City and its under-used port. City and port sit between two offshore areas that are considered to be prime development sites – one in Onslow Bay and the other off Cape Lookout National Seashore. Another good site off the Currituck Banks is a short sail north. Even areas for wind-energy development off the Virginia coast aren’t far away.

Developers of those sites will need a nearby deep-water port to use as a staging area, Carlson said. Twenty acres, a 400-foot-long berth and a mobile crane capable of lifting equipment that weighs as much as 240 tons are the essential pieces, he said.

With a turning basin that averages 42 feet deep, the Morehead port is deepest on the East Coast. It has plenty of dock space, and more than 150 acres is available on Radio Island for industrial development. All the Morehead port lacks is the crane. “But we could easily acquire one,” Carlson said.

The port also has the added feature of being an easy four miles from the open ocean with no overhead obstructions.

“We’re looking forward to working with all entities to bring this business to North Carolina,” Carlson said.

The discussion comes at a critical time. The N.C. Department of Transportation, which runs the state’s ports in Morehead City and Wilmington, is completing a study to determine the future of the ports, which lost almost $14 million over the last three fiscal years.

Meanwhile, Morehead City is re-evaluating its zoning code for the port after PCS Phosphate proposed to build a sulfur smelter at the port. The company withdrew its plans last summer after thousands of people protested.

It could be helpful if everyone involved sat down to figure out a common strategy, but those talks haven’t happened. “We probably should talk with them,” Carlson said of meeting with city officials.

Neal Littman would much rather see turbine blades stored next door than belching smokestacks. He’s co-owner of the management company that runs the Morehead City Yacht Basin, a port neighbor. He was one of the leaders of the opposition against the smelter.

“Yes it would be a very good thing,” Littman said of the prospect of wind developers using the port. “It would probably be one the highest and best uses for state port property.” 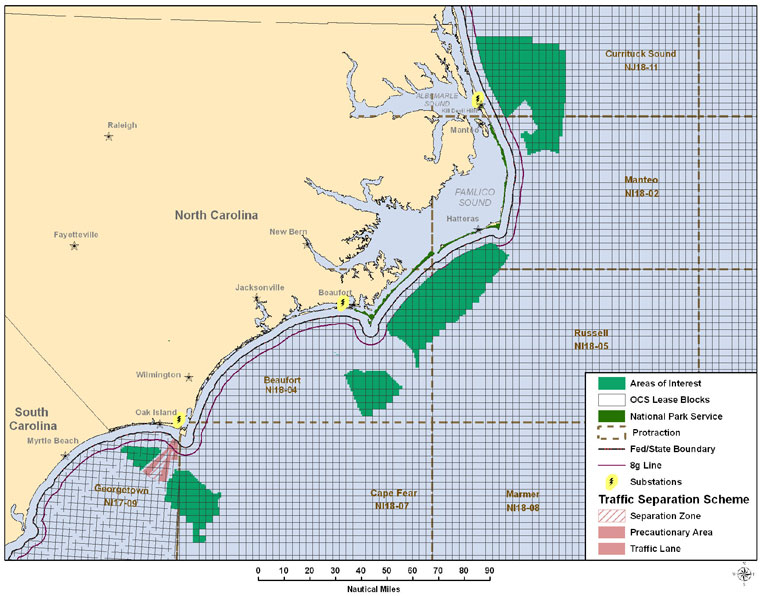 The green areas are those considered to be prime for wind-energy development. Source: U.S. Offshore Energy and Minerals Management.