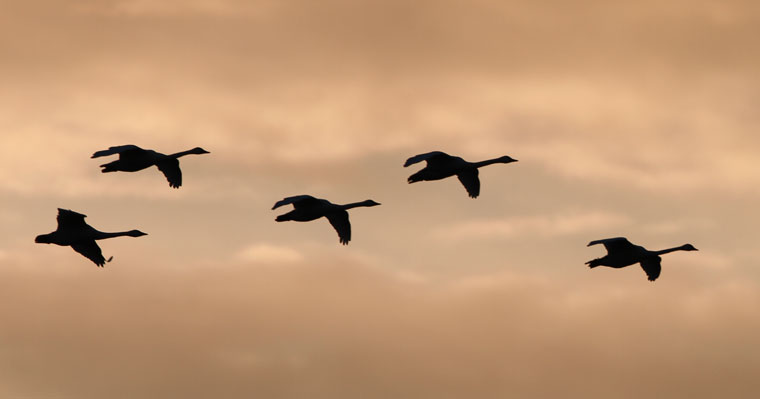 Tundra swans glide over Pungo Lake as the setting sun casts a golden shine on the clouds. Photo by Sam Bland.

PLYMOUTH — Many coastal N.C. residents are unaware that a great wildlife spectacle occurs each winter just a day trip away.

Tens of thousands of ducks, snow geese and tundra swan navigate the Atlantic Flyway and begin arriving in November at Pungo Lake in the Pocosin Lakes National Wildlife Refuge  in Hyde, Tyrrell and Washington counties. That’s why when the Navy wanted to build a practice field nearby residents and bird lovers rose up to stop it. Protest signs sprouted in front of area homes and businesses. Lawsuits were filed and permits challenges. The Navy finally backed down in 2008. The birds were safe.

Once you find your way to the refuge, you must navigate a maze of dirt roads to find the five wildlife observation areas, three of which offer good views of Pungo Lake. It’s really just a large, shallow depression that was created long ago when a ground fire burned the thick, peat-rich soil. Rainfall then filled the hole to create the 2,800-acre lake.

One of the best spots to view some of the 25,000 tundra swans or 100,000 snow geese that migrate here is from the south lake platform on the Charles Kuralt Trail, which honors the N.C. native who brought these special places into our homes with his “On the Road” TV segments on CBS news.

From this elevated platform, you can lose track of time just watching the swans take off and gracefully land on the glassy lake surface as they come from and go to the feeding sites in the nearby fields. Farmers are allowed to grow crops in the refuge but are required to leave 20 percent of their harvest behind for the birds and other wildlife.

The large, white, 20-pound swans use the lake as their roosting site for resting and sleeping.  Floating out on the lake at night provides a safe buffer from predators.  Here they will rest and try to fatten up for the long spring migration back to the breeding grounds on the arctic tundra of Alaska and northern Canada.

Just a short drive down the dusty road is the Duck Pen Wildlife Trail that leads to the Pungo Lake Observation Point. A blind provides excellent concealment allowing you to see a variety ducks.  As you walk down the trail you will notice that the surrounding land is quite wet with standing water. This is a pocosin, the Native American word for “swamp on a hill.” This bog is thick with evergreen shrubs such as wax myrtle, sweet bay and red bay with a few pine trees scattered around.

One of my favorite activities at Pungo Lake is to take a hike down the North Lake Road. On the south side of the road is a wide swath of thick woodland that boarders the lake. On the north side of the road farm fields with food plots stretch out into the distance. As I headed down the road, I flushed out two bald eagles, one mature and one an adolescent, that were perched in the tall gum trees. They flew out over the fields and began gaining altitude until they were soaring high into the blue sky. The soaring eagles flushed thousands of red-winged blackbirds feeding in the fields. They rose in a dark cloud and buzzed about like a pulsating orb before settling back to the ground.

As I continued to walk, the air was quiet except for the occasional piercing cry of a red-tailed hawk and the laughing call of a pileated woodpecker. After about two miles, I finally came across evidence of an animal that I wanted to see. Huge muddy paw prints and island-sized piles of scat were scattered about indicating black bears were nearby. Just off of the trail that leads to the north side observation area I saw a number of bear and deer trails and found a spot to hunker down and wait for a sighting. Alas, it was not to be.

With the sun setting, I headed back to my truck since there was one more stop I wanted to make. Racing the sun, I swiftly walked the muddy road bed in a bit of a funk since I hadn’t seen any bear. I’ve always seen bear from this road. This area has probably the greatest concentrations of black bear in the state, and I was skunked.

Almost to the truck, I took a glance across one of the farm fields with a food plot. Off in the distance I could see three black objects, one large and two small, slowly moving about. A check with the binoculars revealed an adult bear with two cubs. They weren’t as close as I would have liked but they stayed out in the open for some great looks.

With a shot of excitement from the bears, I drove back to the observation platform for my favorite part of the trip. As a gate of darkness began to lower toward the horizon, the tundra swans were flowing back to the security of the lake. Their bodies were a dark silhouette against a golden-hued sky that was changing colors as the last light of the day was fading away. I could hear the wind rushing over their wings as the swans passed overhead. They glided in and skidded on their big webbed feet, landing softly onto the dead slick calm lake water.  The cold evening air was now filled with the soft cooing and honking of their magical calls as they settled in for the night.

To Get There: The refuge is six miles south of Columbia off N.C. 94 on the east and 18 miles south of Plymouth off N.C. 45 on the west. There are several access points to the refuge. Pungo Lake can be accessed by taking N.C. 45 South to Pantego.