Martin Marietta wants to pump about 9 million gallons of water a day from a proposed limestone quarry in Beaufort County into a creek that feeds the Pamlico River. The discharge is too laden with minerals to be used as drinking water, but critics contend it wouldn’t be very good for plants and animals of Blounts Creek either.

Some say the fresh, mineral-rich discharge will harm the brackish backwater on the south side of the river and make it less attractive to saltwater fish and crabs. 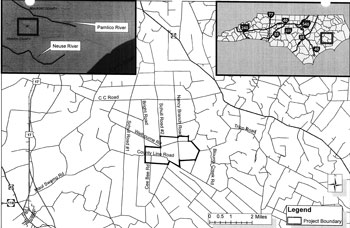 “Fish are mobile and they would probably go somewhere else,” said Dr. Anthony Overton, a biology professor at East Carolina University in Greenville. “The problem lies with those animals and plants that can’t move. They will die.”

Overton said he didn’t know precisely how quarry water would change salinity levels in the creek but he said the volume could “alter the whole system.”

Martin Marietta Materials Inc. wants to build the quarry near the border of Beaufort and Craven counties east of Vanceboro to excavate and crush limestone rock used in highway asphalt and other construction projects. The $25 million project, designed to operate for 50 years, includes an open-pit mine on 649 acres of a 1,600-acre tract.

But that changed markedly when it came to proposals for ground water and creek water.  Concerns raised by area residents prompted a series of public meetings, demands for additional studies and outright opposition.

State and federal agencies are considering company requests for additional permits for work that would affect wetlands and public water.

Company officials say the most feasible way to excavate the limestone deposit 50 to 60 feet underground is to dewater the pit site by pumping out groundwater. The discharge will include water pumped from deep underground and stormwater on the surface. The average discharge would be about 9 million gallons a day, but it could increase to 11 million gallons on some days, company representatives say.

Plans call for the water to travel through 11 miles of manmade ditches and discharge into the creek at two points.

Paxton Badham, a Martin Marietta vice president, said at public informational meeting in January that the water would be acclimated to the surroundings by the time it reaches the creek.

He said the company has a track record of safely operating dozens of mines in the state and would continue it in Beaufort County. “We’re not going to come in this county, make a mess and leave,” he said.  “We plan to operate this quarry responsibly for a long time and be a good neighbor.”

Others are convinced that putting 3.3 billion gallons of water each year into a small creek will inevitably change the neighborhood.

Don Distefano, a mechanical engineer who lives near the mouth of the creek a few miles east of Chocowinity, said he enjoys having flounder, puppy drum and striped bass in the scenic waters near his home where dolphins cavort in the water and ospreys swoop overhead.

Distefano calculated that the quarry discharge would amount to roughly one percent of the creek volume. One percent may not sound like much, he said, but it adds up over time and essentially flushes the creek every 100 days.

“That doesn’t make sense at all,” he said. “You want to make it a freshwater creek, that’s a bad idea.”

Distefano suggested that the water could be sprayed on fields or used by water systems.

He emphasized that while he objected to the water being put into Blounts Creek, he did not oppose the quarry. “I want them to do the right thing to create that mine and do no harm,” he said. 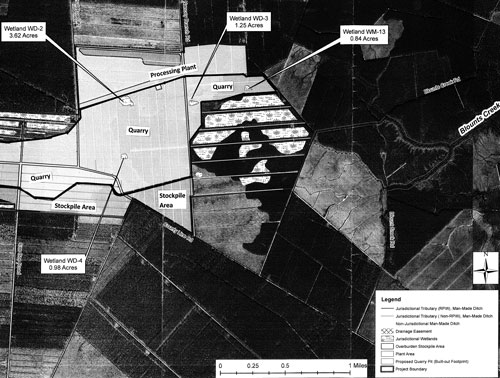 The Pamlico Tar River Foundation, an environmental and educational organization in Washington, says more studies are needed to determine how the discharge will affect downstream areas. The foundation also says the mine will increase the drawdown of groundwater that is the source of drinking water for Washington and Beaufort counties and Vanceboro and for hundreds of people who use wells.

Heather Deck, the foundation’s Riverkeeper, said the company had not adequately studied the effects of the discharge on downstream areas. “It’s a lot of water,” she said. “That changes what organisms will live there.”

She said having the water put to use by area water systems would be a viable option. Another option is to pump the groundwater back into the aquifer, she said, but that is not allowed if it is mixed with stormwater.  The company would still need to address the problems created for individual wells that tap groundwater.

Dr. Richard Spruill, the company’s groundwater consultant, said at the public informational meeting that the groundwater is hard water that would have be treated to remove calcium, iron and magnesium to make it useful in public drinking water systems. He said there have been some discussions with area systems about the possibility of using the water.  So far no agreements have been reached.

Company officials say they will work with area residents to provide new pumps or deeper wells to offset loss of water in individual wells.

But the state Division of Water Quality wants more answers before issuing a draft discharge permit. It asked the company in a Feb. 13 letter for an “expanded” analysis of alternatives to its plan to discharge into the creek. Specifically, the company will have to re-evaluate the feasibility of injecting water drained from the mine back into the aquifer and treating and reusing that water to supply drinking-water systems or some other use.

The division has also asked the company to define a “zone of impact” for its proposed discharge on the creek, including the point downstream where its effects on the hydrology, marine life and the salinity of the creek would be “considered insignificant.”

Martin Marietta Materials has 30 days to respond to letter.

“We’re pleased that the state has taken this step,” Deck said. “In our commenting on this and in our discussions with the state we always our pointed out that the company had failed to do this type of analysis at the front end, particularly reusing the water or injecting it back into the aquifer. We believe those to be reasonable alternatives and potentially feasible.”

A division spokeswoman said a draft permit would then be available for public review and be subject of a public hearing. A hearing date has not been set.

The company is also seeking approval from the Army Corps of Engineers for work that will affect 6.64 acres of wetlands and about 11 miles of ditches under corps jurisdiction.  A corps spokesman said a decision would be made after the company completes additional studies.

Jerry Allegood is a freelance writer based in Greenville. During a 35-year career with "The News and Observer" of Raleigh, he focused on Eastern North Carolina covering hurricanes, nor'easters, snow storms, commercial and recreational fishing issues, military bases, major trials, East Carolina University and a spate of development and environmental issues including the fight over Navy plans for a remote landing field. Retired since 2008, he now enjoys writing news and feature stories that spotlight the region.