Learn how oysters, which are woven in the culture and history of the state, help the environment and boost the economy during North Carolina Oyster Week.

The virtual “Oyster Shellabration” began Monday and wraps up Friday. An aspect of oysters will be highlighted each day on social media. Watch for and share posts with the hashtags #NCOysterWeek, #NCOysters and #GiveAShuck.

North Carolina Sea Grant, the state Department of Natural and Cultural Resources and North Carolina Coastal Federation are collaborating on the event.

Monday focused on the history, Tuesday highlights the NC Oyster Trail, the ecology of oysters will be featured Wednesday, the culture of oysters on Thursday and Friday the economy. There will be historical photos and recipes shared online each day as well as new videos featuring oyster growers.

“Oysters play an important role in coastal communities and hold a special place in the hearts of folks across the state,” said Jane Harrison in a release.

Harrison is the North Carolina Sea Grant’s coastal economist and a leader for the new NC Oyster Trail. The Oyster Trail provides unique tourism experiences on the state’s oysters, including visits to oyster farms.

Erin Fleckenstein, federation coastal scientist and regional manager, said in a statement that in addition to oysters filtering water, improving water quality, and creating habitat for other animals, “Their unique flavor also makes them a desirable dish, supporting the livelihoods of watermen and local economies across the state.”

There will be a special Outer Banks Chamber of Commerce virtual presentation about the NC Oyster Trail at 12:30 p.m. Tuesday. Harrison, Fleckenstein, Leslie Vegas, coastal specialist with the federation, and special guest chef Evan Hayes from Blue Water Grill & Raw Bar in Manteo will demonstrate how to shuck an oyster and share favorite recipes. Register for the event at go.ncsu.edu/ncoystertrail.

Harrison said in an interview Monday that oysters provide numerous benefits to marine and aquatic ecosystems. “They are a food source for animals and people, they improve water quality by filtering water, and they act as habitat for a variety of finfish and crustaceans.”

Fleckenstein added that one way to remember the value of oysters is because they provide the three “fs” of filter, food and fish.

“Each adult oyster can filter up to a bathtub full of water — about 50 gallons — each day, they are a food that many North Carolinians enjoy eating and they also provide habitat for other commercially and recreationally important fish like blue crab and red drum,” she said.

Many mariculture farms are featured on the NC Oyster Trail, as well as restaurants, markets and special events.

“How an oyster tastes is influenced by the body of water it comes from, the algae it feeds on, the strength of currents and tides, the mineral content of the seafloor, rainfall, seasons and more,” Harrision said. “On the Oyster Trail, you can taste oysters from up and down our coast and learn how they are grown.”

One stop on the NC Oyster Trail is Three Little Spats Oyster Co. The mariculture farm is made up of 55 acres on both sides of Permuda Island, in the salty waters of Stump Sound.

Ryan Gadow, cofounder and head of sales for the company headquartered in Wilmington, told Coastal Review Online that the main reason they became involved in oyster farming are the benefits to the environment that oyster farming creates.

“Besides the environment impact that occurs, it just happens to bring a positive economical impact along with it as we employ people and deliver a safe, profitable product to restaurants and seafood markets,” he added.

Gadow said that the company joined the NC Oyster trail to help spread the good information “that us oyster farmers create, and hopefully dispelling the dreaded ‘R’ month myth. In the future we will be offering a good amount of aquaculture tourism … stay tuned!”

The common saying is that oysters are only safe to eat in months with an R in the name.

North Carolina Maritime Museums are also joining in the celebration by offering educational activities, local oyster recipes, videos and live craft times on social media and on the museum’s website.

The Beaufort site is taking a look at oysters from historic, scientific and culinary perspectives.

“Oyster Week gives us a great opportunity to explore the history and importance of the oyster in our state,” Associate Curator Benjamin Wunderly said.

During Oyster Week, Wunderly will delve into the history of oysters, which includes learning about the Native American population of the region known to eat the eastern oyster. He will also look at the state’s heyday of oyster harvesting, regulation of the fishery and efforts to promote restoration of oyster reefs, leasing for oyster beds and aquaculture type operations, according to the museum.

Wunderly, part of the museum’s education department, said the Beaufort site will also share an educational activity on oyster anatomy, which includes a narrated video and print activity, and a slideshow on making oyster dressing, a Thanksgiving staple along the coast.

The Maritime Museum location in Southport will host an oyster craft time on its Instagram and a Facebook video premiere along with additional social posts related to oysters.

The Graveyard of the Atlantic Museum in Hatteras has invited area chef Sharon Peele Kennedy, who hosts “Cooking Hatteras Style” presentations in the museum’s Salty Dawgs Lecture Series and has a cookbook for sale in the gift shop, to share oyster recipes.

“There’s a lot to oysters that people maybe don’t think about,” Wunderly said. “I’m glad this week gives us a chance to focus on what may seem like just an unassuming bivalve.”

John Fear, NC Sea Grant deputy director, reiterated that oysters are a critical habitat for a multitude of species and improved water quality.

“They clean the water through their filter feeding. They protect shorelines from erosion. They help fertilize the sediments through their waste,” he said in an interview.

“A single oyster is often quoted as being able to filter around 50g/day as they feed. This filtering removes sediment, algae, and other particulants,” Fear said. “This helps improve water quality by increasing water clarity and decreasing the nitrogen and phosphorus available to algae.”

Fear said that historically, the oyster population was large enough to filter the entire volume of coastal sounds in about a week’s time and represented a major “cleaning” feature for the systems.

Fleckenstein said Monday that the federation has many great projects underway up and down the coast to boost the oyster population.
“We continue to build living shorelines with materials that attract and grow oyster reefs whenever possible. We partner with the state to build cultch planted reefs that are eventually open to harvest. And we partner on the creation of oyster sanctuaries which are large reefs built in Pamlico Sound to provide substrate for oysters to grow up on,” she said. “The sanctuaries are meant to serve as a reserve for oysters that then reproduce and “seed” other nearby reefs. We just completed the successful Swan Island Oyster Sanctuary — near Point of the Marsh — this summer and received funding from NOAA to build the next reef which will start construction in 2021 near Cedar Island.” 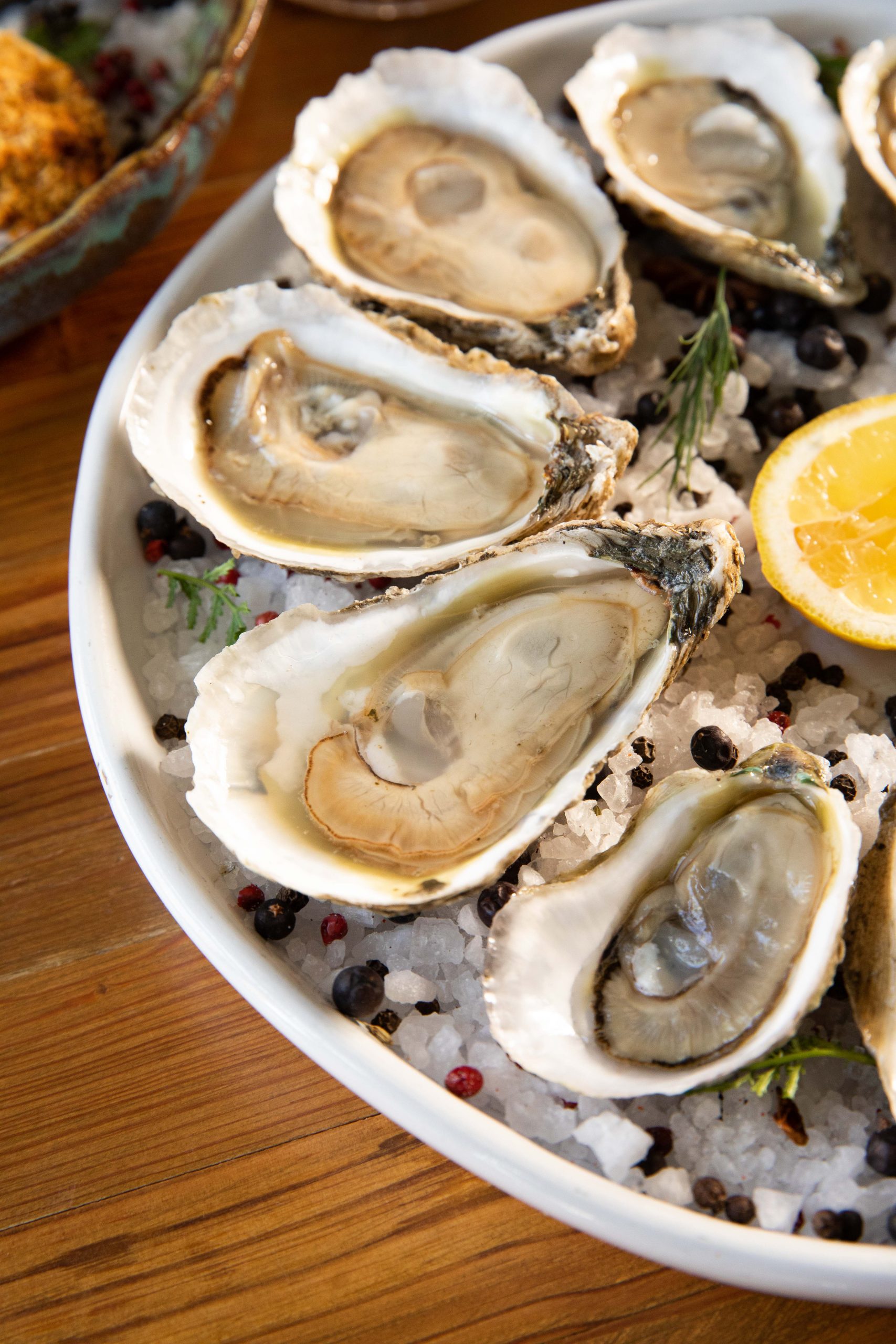 Each day, check hashtags #NCOysterWeek, #NCOysters and #GiveAShuck on social media to learn about the day’s topic.

Tuesday’s focus is on the NC Oyster Trail. The Mission of the trail is to provide oyster tourism experiences that help sustain and grow the state’s oyster supply and demand, resulting in economic, environmental and social benefits to the state’s seafood industry and coastal communities. Learn more about the oyster trail’s purpose, programs and resources.

On Wednesday, learn about the ecology of oysters. Oyster populations are at a record low worldwide. Though there have been recovery efforts in the state, it is estimated that oysters are at about 15-20% of historic harvest levels. Oysters are ecologically important because they improve water quality by filtering particles from the water and serve as prey and habitat for many other animals. Social media posts on Wednesday will focus on water quality, reef restoration and educational resources.

The culture of oysters will be highlighted Thursday. The state’s coastal communities have depended on oysters for centuries. Oysters support a viable commercial and recreational fishery that is an important part of North Carolina’s cultural heritage and economy. Learn about connections to the coast, coastal communities, harvesting and oyster farms.