This is an installment in a continuing series on climate change and the North Carolina coast that is part of the Pulitzer Center’s nationwide Connected Coastlines reporting initiative.

North Carolina in the last decade has gone from the state that passed a bill in 2012 restricting the use of sea level rise data for regulatory purposes, which drew criticism for “outlawing science,” to introducing this week what the state calls its most comprehensive effort to address climate change.

Submitted to Gov. Roy Cooper by the North Carolina Department of Environmental Quality, the North Carolina Climate Risk Assessment and Resilience Plan is to serve as a framework to guide state action, engage policymakers and stakeholders and facilitate collaboration across the state, officials said Tuesday. The plan is also intended to focus the state’s attention on climate resilience actions and address underlying stressors such as the changing climate, aging infrastructure, socioeconomic disparities and competing development priorities. 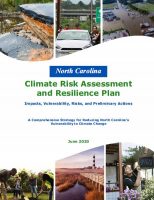 “Climate change impacts the health, safety, and financial stability of North Carolinians, and we must take it head on. A resilient North Carolina is a stronger and more competitive North Carolina,” said Cooper.

One of the many charges the governor gave cabinet agencies when he signed on Oct. 29, 2018, Executive Order 80, North Carolina’s Commitment to Address Climate Change and Transition to a Clean Energy Economy, the plan “is the state’s most comprehensive effort to date, based on science and stakeholder input, to address North Carolina’s vulnerability to climate change,” said DEQ officials.

DEQ submitted the 372-page document on behalf of the Climate Change Interagency Council, which prepared the resilience plan under the direction of the executive order.

In addition to the resilience plan, Executive Order 80 established several goals for the state to accomplish by 2025 that include a reduction of statewide greenhouse gas emissions to 40% below 2005 levels, increase the number of zero-emission vehicles to a minimum of 80,000 and reduce energy consumption per square foot in state-owned buildings by at least 40% from fiscal year 2002-2003 levels. The Climate Change Interagency Council was formed to help the cabinet agencies work together to achieve those goals, according to his office.

“As we begin another hurricane season with even greater challenges facing North Carolina this year, the administration’s leadership has better positioned our state to prepare our most vulnerable communities,” said DEQ Secretary Michael S. Regan, chair of the Climate Change Interagency Council. “The Risk and Resilience Plan takes the experience and knowledge of the experts and leaders from across the state to ensure a comprehensive approach to address the risks to our infrastructure and economy.”

“This plan will be tested repeatedly with every major storm that strikes our coast. Strong and persistent leadership must now translate into meaningful day-to-day policy and management decisions that actually reduce our vulnerability to extreme weather events. Today’s report establishes benchmarks by which the success of this framework will now be measured,” Todd Miller, executive director of the North Carolina Coastal Federation said Tuesday after the report was released. The Coastal Federation publishes Coastal Review Online.

Environmental Defense Fund Director Will McDow said in a statement that after devastation from back-to-back hurricanes and in the face of rapidly rising seas, “North Carolina must act with urgency to build meaningful resilience. This plan marks an important milestone towards a more resilient future for our state.”

“The Resilience Plan begins to address protecting vulnerable communities who are bearing a disproportionate share of the climate change burden,” said EDF Manager, Partnerships and Outreach Marilynn Marsh-Robinson. “What’s needed next is additional community engagement and holistic approaches developed hand-in-hand with the communities they are designed to protect. It’s critical to support those most impacted throughout the process and equip them with what is needed to implement long-term solutions.”

“The governor is starting an important dialogue on how best to prepare our state for the impacts of climate change,” added McDow. “We must now work together to move this plan into action to build meaningful resilience for our communities, businesses and ecosystems.”

Yaron Miller, an officer with The Pew Charitable Trusts’ flood-prepared communities initiative, told Coastal Review Online Tuesday that the plan is an important step for North Carolina as its residents face the impacts of frequent flood-related disasters.

“We are pleased that among the many resilience strategies identified, there is a chapter about applying nature-based and low impact development practices across the state, as well as recommendations to immediately incorporate these strategies into planning.  These are important tools to manage flooding and improve water quality,” Miller continued. “Pew and the North Carolina Coastal Federation have convened a diverse group of stakeholders to develop policy recommendations for how these solutions can be employed by state, local governments, and businesses to address flooding in the state.”

The shift in outlook on climate change has not gone unnoticed by state officials.

Regan said that following hurricanes Matthew in 2016 and Florence in 2018, audiences have become more receptive to talking about climate change.

“I think people are really feeling the implications of climate change, both from an environmental standpoint, a public safety standpoint and then from an economic standpoint,” he told Coastal Review Online following a presentation at a Wilmington Rotary Club meeting at Cape Fear Country Club earlier this year. “So our communities are experiencing these changing weather patterns, and now I think more people are open to the conversations about not only what do we do to prevent, but what do we do to recover once these events occur.”

Not only has the conversation shifted but the state’s official response is also different and includes the launch in October 2018 of the North Carolina Office of Recovery and Resiliency, or NCORR, to “streamline disaster recovery programs statewide and help communities rebuild smarter and stronger.”

NCORR Chief Resilience Officer Jessica Whitehead said that the nature of the conversation about climate change has in the last decade gone from “Is it happening?” to “It’s happening. Now what do we do?”

“What’s stayed the same is that there are still big challenges to defining what we do,” Whitehead said. “We know climate change isn’t just what we saw in the last flood – it’s droughts, and extreme heat, and landslides, and fires, and sea level rise. North Carolina has 100 counties, and they are all different places with diverse populations who will need to recover from and adapt to these diverse hazards.”

Looking to the future, “one of the greatest challenges we face is a changing climate,” Regan told the group during his talk. “As you all know better than anyone, your communities live and work on the front lines of climate change. Less than two years after Hurricane Matthew struck North Carolina, Hurricane Florence ended up being the costliest natural disaster in our history, causing the great state of North Carolina over $17 billion in damage. And last year, Hurricane Dorian hit some of our same communities.”

When Cooper, a month after Hurricane Florence, introduced the executive order to address climate change and transition to a clean energy economy, he was being proactive, Regan explained.

“That executive order is the most ambitious step ever taken in North Carolina’s history to combat climate change and transition North Carolina to a cleaner energy economy, while keeping the economy, front and center,” Regan said, adding that the order was a message that the state could no longer wait on federal government to act, “because our environment, our economy and our way of life could not wait.”

Executive Order 80 calls for every cabinet agency under the governor’s leadership to develop a carbon-reduction strategy. Cooper tasked NCDEQ with developing the North Carolina Clean Energy Plan submitted in the fall of 2019 to serve as “a visionary roadmap of viable policies for North Carolina’s clean energy future,” Regan said.

“We know climate change isn’t just what we saw in the last flood – it’s droughts, and extreme heat, and landslides, and fires, and sea level rise. North Carolina has 100 counties, and they are all different places with diverse populations who will need to recover from and adapt to these diverse hazards.”

Though lauded by many, Executive Order 80 was also met with criticism.

“While arbitrary platitudes might satisfy far-left donors, our state’s energy policies have to account for the real costs they impose on the public,” Senate Leader Phil Berger, R-Rockingham, was quoted in a news report when Executive Order 80 was introduced in October 2018.

“I support an all-of-the-above energy strategy that includes renewables, but I don’t support programs that have minimal positive impact and can only sustain themselves with taxpayer and ratepayer money from those who can least afford it. The key is to find solutions that actually work in the private market, and I’m open to any and all ideas that help get us there.”

“Hurricane Florence’s devastation makes it clear that we need to work in every direction to protect lives and property from future flooding. This committee’s work will be integral to the comprehensive resiliency planning that will take place over the coming years,” Berger and Moore said in joint statement when the committee was announced.

The committee was tasked with studying flood damage mitigation caused by extreme rainfall events and are to submit a report by 2020, according to the October 2018 announcement. The scope of the study will be river basins that experienced at least 10 inches of rainfall during Hurricane Florence. The committee’s webpage on the state General Assembly website Tuesday did not have information about the release of a report.

Vaughn Hagerty: The reporter who broke the GenX story
Support the coastal news you value.CoastalReview.org is an award-winning, nonprofit news service providing unbiased, in-depth and investigative reporting about issues on the North Carolina coast. Your support makes our work possible. Please join the CRO Press Club or put your business in the Sponsor Spotlight to support the coverage your care about. Learn MoreGive or Sponsor