The 2020 Census counts the population in all 50 states, the District of Columbia, and five U.S. territories of Puerto Rico, American Samoa, the Commonwealth of the Northern Mariana Islands, Guam and the U.S. Virgin Islands.

Make sure your community gets the resources it needs by filling out on Census Day Wednesday the 2020 census online using a desktop computer, laptop, smartphone or tablet.

Census Day is April 1 because that is the date used to determine who is counted and where in the 2020 census. You can use the Census ID from your invitation or provide your address when you respond.

In addition to responding online, the public can respond by phone in English or 12 other languages. There are also 59 non-English language guides and videos plus American Sign Language available on 2020census.gov.

“When you respond, you’ll tell the Census Bureau where you live as of April 1, 2020, and include everyone who usually lives and sleeps in your home. You can respond before or after that date. We encourage you to respond as soon as you can,” according to the bureau. College students should be counted where they live while attending school.

The U.S. Constitution requires a census of the population taken every 10 years. The information is used to determine the number of seats each state holds in the U.S. House of Representatives as well as informs legislative district boundaries and how hundreds of billions of dollars in public funds are allocated by state, local and federal lawmakers to communities for public services and infrastructure like hospitals, emergency services, schools and bridges each year over the next 10 years.

Households that have not responded online or by phone will receive a paper questionnaire April 8-16.

Based on continuing assessments of guidance from federal, state and local health authorities relating to COVID-19, the Census Bureau is suspending 2020 Census field operations until to April 15. 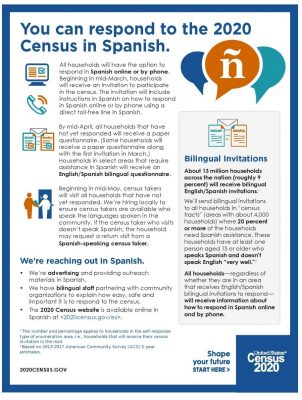 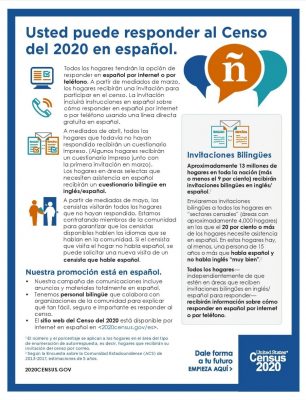