MANTEO — Ocracoke Island’s north end may have to be restored to its wild state if current conditions continue. That is one of the options offered in a soon-to-be-released transportation plan.

Changing and intensifying coastal dynamics have propelled to the front and center two of the more persistent and complex transportation issues on the Outer Banks. Ocracoke’s highway has been critically wounded, while its northern end is eroding away. And Dare County has just about run out of places to dispose of the material removed from its increasingly shoaled waterways.

In updates provided during a recent meeting of the Dare County Waterways Commission, it was evident that the situations, both long-looming crises, have now become urgent concerns.

On Ocracoke Island, which suffered severe damage in September during Hurricane Dorian from a 7-foot storm surge, work is underway to protect the ferry basin on its northern end, John Abel, N.C. Department of Transportation bridge program manager, told the Waterways Commission. Installation of a sheet pile wall along the eroding shoreline is almost completed, he said. After sandbags are placed at the end of the wall, the contractor will leave until April, when he will return to install concrete caps and rebuild the dunes.

Also, an environmental assessment is being finalized for a proposed groin project near the same spot, Abel said. Constructed of rows of steel sheeting and steel piles, the “five-finger” groin is designed to slow sand travel, allowing the shoreline to build behind it. Once the EA is completed, it will be reviewed by several agencies and made available for public comment.

The intent of both interim projects, essentially short-term Band-Aids, is to stop the sand from washing away at South Dock, the ferry terminal at Ocracoke’s north end where thousands of vehicles on the Hatteras-Ocracoke ferry, the state’s busiest ferry route, load and unload. 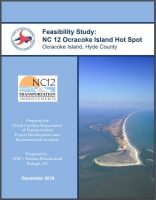 Meanwhile, NCDOT is in the process of updating its December 2016 study on long-term solutions for the hot spot on N.C. 12, which stretches from just south of the Hatteras ferry terminal and continues 4 miles. The area was identified in a 1991 NCDOT study as one of six hot spots on N.C. 12 between Oregon Inlet and Ocracoke village, meaning they are vulnerable to overwash, storm surge and beach erosion.

Since the road was built on Ocracoke in the mid-1950s, it has been subjected repeatedly and increasingly to storm damage. In recent years, the transportation department has had to do some degree of road repairs and dune restoration after nearly every large storm. Even after Dorian ripped up 1,000 feet of roadway in the hot spot area and flattened dunes, two subsequent storms inflicted further poundings. Torn asunder over and again, the road now appears perilously – and possibly irretrievably – weakened.

The updated feasibility study, which is expected to be released within weeks, Abel said, details numerous alternatives and combinations of alternatives that include road relocation or raising, bridges around or over the hot spot area and varied levels of beach nourishment. In addition to revisions in estimated costs, the main update in the proposal addresses the alarming increase in erosion on the island’s north end that is undermining the ferry basin and ferry entrance channel adjacent to the vehicle stacking lanes.

Abel said that a short-term solution could be building a bridge similar to the temporary “Lego” bridge that had initially spanned the new inlet at Pea Island. But the most dramatic solution would involve moving the entire ferry operation to a new ferry terminal that would be built south of the Ocracoke Pony Pens. Everything would then have to be brought back to its original condition – including removing the asphalt.

“The long-term goal is to release the ponies and let them roam on the north end,” Abel said about the terminal relocation alternative. “There also may be some off-road (access.)”

“The Park Service is in favor of a long-term, sustainable solution.”

Dave Hallac, superintendent of Cape Hatteras National Seashore, which owns most of the land on the island except in the village, said that the National Park Service is working with NCDOT and the local community to find the best solution, but he said he is open to doing what’s necessary to help Ocracoke.

“The Park Service is in favor of a long-term, sustainable solution,” Hallac said in a recent interview, although he said it’s too soon to know what that would be.

The bottom line is that erosion on the island’s north end has gotten much worse, and it is happening much faster than anyone anticipated.

“It was astronomical, really, compared with what we’ve seen in the past,” Hallac said. “Just five years ago, the north end of Ocracoke had 30 to 50 acres of sand flats. All of that is completely gone.

“And it’s not just at the ferry dock,” he added. The off-road vehicle access has also suffered.  “Today, Ramp 59 is a ramp to nowhere.”

There will be a 30-day public comment period after the study is released.

While the same nasty storms strip numerous Outer Banks shorelines of their beaches and protective dunes, the inlets and waterway channels are filling with sand, creating shoals that can ground fishing vessels and recreational boats. Channels in and out of Oregon Inlet and Hatteras Inlet in recent years have required more frequent dredging, but spoil islands or onshore disposal sites are almost at capacity. And if there’s no place to put the material, dredging will not be allowed.

The state has recently embarked on a study to determine the number and location of dredge material disposal sites on the coast, but it’s not meant to determine the locations of new suitable sites to deposit dredged sand, said Ken Willson, program manager at APTIM,  a Wilmington-based coastal engineering firm.

The Dare County Board of Commissioners subsequently approved a resolution to request a grant from the state’s shallow-draft shoreline management fund to cover 66% of the estimated total project cost of $345,191. The county would be responsible for the remaining costs.

Willson said that the grant must be in place before the county can enter a contract with his firm to start the work. He added that he expects a decision soon from the state.

In addition to conducting new surveys, APTIM will also collect existing data to determine the best way of dealing with the material, whether it’s deposited on existing or rebuilt marsh islands or onshore. The plans would also include recommendations and estimated time and costs to implement. The company would also secure the necessary permits for some of the projects, Willson said.

“Out-of-the-box” techniques, he said, will also be considered, such as spraying or pumping material onto marsh islands, or laying the material on the back side of the islands, which can provide wave-sheltering benefits.

Willson said that the goal is to have disposal sites available before the Army Corps of Engineers starts the Rollinson Channel dredging project, which is scheduled to be done in Hatteras Inlet in 2022.