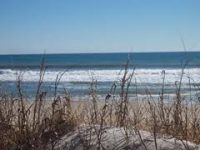 The action came during a special called meeting Oct. 4 to consider the contract with Weeks Marine Inc. of Cranford, New Jersey. The project is expected to start in mid-December and run through April 2020.

The project, often referred to as the Local Storm Damage Reduction Plan or SDR, includes dredging New Topsail Inlet and the side channels in Banks Channel and is expected to place up to 2.2 million cubic yards of sand on the beach, including the development of a new dune, according to a press release from the town. The project is the continuation of the town’s 30-year plan for beach management that was adopted in 2011.

“We are pleased our project will be underway this winter,” said Michael Rose, town manager, in a statement. “Awarding this contract is the culmination of a lot of hard work by the Town and its partners. Our town officials, the Beach, Inlet and Sound (BIS) Committee, residents, and various state and federal agencies have made Topsail Beach’s nourishment program a great success.”

The town’s beach nourishment efforts started in 2003 when Topsail Beach leaders set aside a portion of its tax rate for a beach fund. Over time, several projects have been implemented through its own local project efforts. In 2016, Topsail Beach was named Best Restored Beach by the American Shore and Beach Preservation Association, or ASBPA.

“This project is near and dear to my heart,” said Chris Gibson, the president of TI Coastal, the town’s engineering contractor. “I have been working with the Town for 10 years, and this community is my home. The design of this project will allow us to dredge material every four or five years for beach nourishment, while keeping the water deep enough for boats to get in and out of the channels the entire time.”